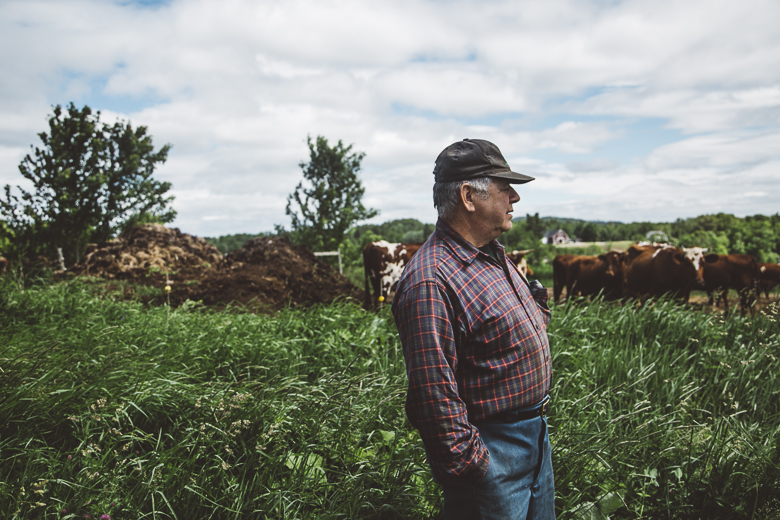 Our Land in Transition series shines a light on the hundreds of thousands of acres of Maine farmland that will be changing hands within the next decade. The future of farming in Maine depends on what happens to that land.

We often share stories of the beginning farmers we work with, who are gaining access to farmland and keeping it in cultivation. Their energy and passion for growing food and building community is inspiring.  But the story of new farmers putting down roots in Maine often starts with the previous farmland owners, who have the vision and patience to ensure that their land stays in farming and is accessible  for the next generation. Older farmland owners’ commitment to the land is equally inspiring, and they play an important role in making sure that Maine has the farmland needed to sustain itself and the region far into the future.

Dan Curran has farmed his family’s land in Sabattus his entire life. It’s where he grew up and where his parents also farmed. It was a dairy farm until recently, when Dan decided to switch to raising beef, lamb and selling hay from his 91-acre property. He farms alongside his children and their families, who plan to take over the farm when he retires.
He’s thrilled that his kids want to continue farming here, but said that he would have protected the land regardless. Recently, videographer Galen Koch and I had a chance to walk the property with Dan, and listen as he explained the decision to protect his farm.

Help keep farms like Curran Farm in farming by joining us in our work to protect farmland, support farmers, and grow a future for farming in Maine. Become a member.