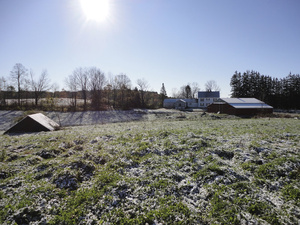 A recent agreement means the Fogg Farm can never be subdivided for housing.

Roland Fogg has always liked to gaze over the fields of his family’s Fogg Farm in Saco and reflect on how little has changed over the last 200 years.
David Johnson knows those moments, noting that his cousin has often ended up saying, “I thank you, Rufus.”

In 1810, one of Fogg’s great-grandfathers, Rufus Fogg, established a dairy farm off Simpson Road on land along the Saco River.

The 300-acre farm operated as a dairy farm until the late 1960s. Today, its vast fields are farmed for hay.

“I think (Roland Fogg) knew that it took a lot of hard work to keep these fields clear. He was very appreciative of the heritage behind this farm,” said Johnson, who lives in Atlanta but visits his cousin whenever he can.

Roland Fogg grew up helping his father and uncles milk cows and harvest crops. As he grew older, he often worked the hayfields on nights and weekends.

“He hayed those fields until his early 80s,” Johnson said. “I think it kept him healthy.”

Fogg, 85, still lives on the farm on Simpson Road but can no longer work the fields because of his age.

Johnson said Fogg’s wish that the land be preserved forever for agriculture has come true.

In December, Johnson helped facilitate an agreement that grants the Maine Farmland Trust a permanent agricultural easement on the farmland.

Stacy Gambrel, the lands project coordinator for the Belfast-baseda organization, said the easement means that a permanent deed restriction has been placed on the property preventing it from ever being subdivided for housing.

The land can be used only for agriculture, Gambrel said.

Gambrel said there are two large farms near the Fogg Farm, which makes that stretch of Simpson Road seem like a trip back in time.

One of those farms — Timber Ridge Farm — is a working horse farm. The Saco Valley Land Trust holds a conservation easement on it.

“The Fogg family are yet another example of a very generous and forward-looking Maine family who care deeply about the future of farming in Maine,” said John Piotti, the Maine Farmland Trust’s executive director.

Under the agreement, the Maine Farmland Trust will visit the property once a year to make sure that the easement is being upheld.

Gambrel said the Maine Farmland Trust has set a goal of preserving 100,000 acres of farmland over the next four years. The organization has already received $6 million in pledges toward its fundraising goal of $10 million.

“We definitely have our work cut out for us,” Gambrel said.

Piotti said that protecting farmland with easements is critical to the long-term success of farming in Maine. He said the biggest barrier to farming’s expansion is the high cost of land for people who try to enter the business or farmers who want to expand.

“More and more people are beginning to see that farming in Maine is growing and poised to grow more,” Piotti said. “But to realize agriculture’s full promise, it’s critical that we protect more farmland.”