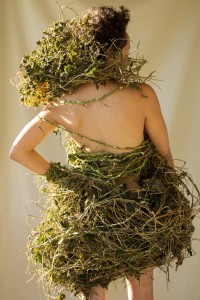 ROCKPORT — They say food can be art, but sometimes art can be food.

Art can be onions or carrots, or even 5-year-old broccoli.

Yes, 5-year-old broccoli stalks, which, oddly enough, look like pieces of wood. Farmer/artist Jacinda Martinez pulled out a giant plastic tub filled with them in her basement studio.

“I’m always afraid when I open these that I’ve created a creature that’s going to come out,” Martinez joked as she lifted the lid off the tub.

Last year, Martinez sewed some of these stalks together vertically to make a midriff, then added a “skirt” of amaranth that still retained some of its scarlet color. The result was a stunning (if skimpy) outfit you might not wear to run errands, but it would look at home on the runway of a New York fashion show.

Martinez, 30, has been experimenting for six years with vegetables, both dried and fresh, that she gleans from farmers’ fields, transforming them into works of wearable art. She turns them into designer outfits and then she photographs women modeling them.

Martinez started showing her work only last December, at an art show at Primo restaurant in Rockland, where she worked for three years as farm manager. In April, her photographs were part of a group exhibition at the Maine Farmland Trust Gallery in Belfast. And on Saturday she displayed both photos and dresses at the Maine Fare food festival in Belfast and the Farmland Trust gallery.

Martinez has hand-sewn more than 40 pieces since she began playing with her food. Her portfolio includes photographs of a naked woman lying in a green field, covered in corn leaves. Another woman wears a dress made from dozens of chard soil blocks rescued from a flat left over after transplanting. A woman covered in tatsoi looks like a big, fluffy green poodle, as if her body exploded and out came the Asian greens.

Wound around another woman’s neck are ropes of small green tomatoes that look like a necklace. “The front of this dress just kind of drapes loosely,” Martinez said, “and then I thought, ‘Oh, pearls… ‘ ”

And, voila, some tomatoes that never ripened were transformed into ornament that would make an oyster proud.

What’s the point? There are several, Martinez says. If you look at her work as just art for art’s sake, it’s a visual experience of color and texture. It’s also a statement about the transient nature of life and the finicky nature of fashion. Living things eventually decay. Fashion comes and goes. More important to Martinez, it’s an introduction to the idea of “slow fashion.” Just as slow food asks you to think about what you put in your body (How long did it take the farmer to grow that stalk of celery in your salad?), slow fashion asks you to think about what you put on it.

“If it’s not synthetic, our fashion is essentially from the earth,” Martinez said. “You know, cotton farming is really one of the most intensive kinds of farming ever done, and yet do you think about that when you put it on your body?”

Anna Abaldo, curator at the Maine Farmland Trust Gallery, said while she knows “the fashion piece” is important to Martinez, she herself is more interested in the way the work illustrates the intimate connection between human and plant. She cited a review by critic Britta Koneau that said “the interaction between smooth skin and limp, crunchy, or prickly organic matter is visceral, almost invasive.”

“There’s a beautiful tension there,” Abaldo said. “This is material that otherwise would be thrown away, or would never even reach the table, yet something very beautiful is made of it. There’s layers in it for me of honoring the vegetable in its entirety, and with that, honoring where our food comes from.”

Abaldo said Maine artists are at the forefront of using food and farming as material in their work. The Harlow Gallery in Hallowell, Waterfall Arts in Belfast and a group in Blue Hill have all developed initiatives focused on food. She suspects artists living in other states with strong local food movements, such as Vermont and California, are pursuing similar paths.

Martinez grew up in Bay Ridge, Brooklyn, a blue collar neighborhood where her mother runs a craft and fabric shop. Her father, who is from the Dominican Republic, works in the garment district in Manhattan.

Martinez attended college in Pennsylvania, where she took courses in photography, as well as basket weaving and other crafts. After graduation, she studied in England and then later went back to the United Kingdom on a work visa. She participated in a program called “World Wide Opportunities on Organic Farms” through which she worked with Lise Bech, a Danish basket weaver who lives in Scotland.

“I was so enamored and inspired by the fact that she grew 12 varieties of her own willow, processed them onsite and then wove these extravagant, really massive basket structures,” Martinez said. “We’d work all day outside in the garden and then come inside and weave some baskets. It began this whole process of full circle for me. It came from the earth, you’re harvesting it, creating it, and then it’s just going to go back. As it came, it goes.”

Back in the States, Martinez apprenticed at a New Jersey farm, where she began tinkering with turning vegetable matter into clothes. There was “mythological” chard growing “like, 6 feet tall” in the greenhouse that needed to be disposed of, “but my first thought was, ‘Oh, this would be so beautiful draped on someone’s body.’ ”

Using a housemate for a model, she designed a skirt and top from chard.

This year, Martinez started her own edible garden design and consulting business called Grounded Local, but she continues to work two days a week at Dooryard Farm in Camden, which helps keep her in materials. She makes eight to 12 outfits a year. Sometimes she works in an upstairs sewing nook, where she displays a 70-year-old sewing machine her father gave her. Sometimes she is in the basement studio, where she has a mannequin and a neutral backdrop for taking photos. Remnants of old outfits hang on the studio wall like sheaths of dried herbs in a barn.

Her photographs document everything: a dress made of three kinds of cabbage – savoy, Chinese and smooth leaf; a skirt of nicotiana leaves with habanero peppers sewed around the waist like a string of Christmas lights and a matching habanero necklace.

The dresses are usually wet when they’re put on the models, which makes the material easier to work with.

Over the past six years, Martinez has learned which vegetables are fashion-friendly and which are not. Probably the most difficult to work with is garlic stems. She estimates the first garlic stem dress she made took 10 hours to sew.

“No matter how long you soak them, they don’t really seem to become malleable,” Martinez said, showing a visitor stems she had soaked in water dyed with marigolds for 24 hours. She was trying again, for a dress she was making for Maine Fare.

“I was, like, ‘the dress has spoken,’” Martinez recalled. “Give it up. This isn’t going to work. I spent so much time sewing this dress, and I have to let it go.”

On the other hand, an outfit made of cucumbers – a top that looks like the upper half of a bikini and bottoms that look like boy shorts – held together surprisingly well.

Martinez isn’t sure where this work is taking her; she only knows that she’s not done yet.

“For now I still really enjoy this,” she said, “so I’m going to keep doing it.”

Most recently, she has embarked on a “series within the series” called, simply, Decay. She’s photographing a dress made of decaying bolted lettuce, taking new photos of it on the same model every three months.

But eventually, that dress, along with all the others, will end up in the same place.

Bearing Fruit: Art at the intersection of human and vegetable