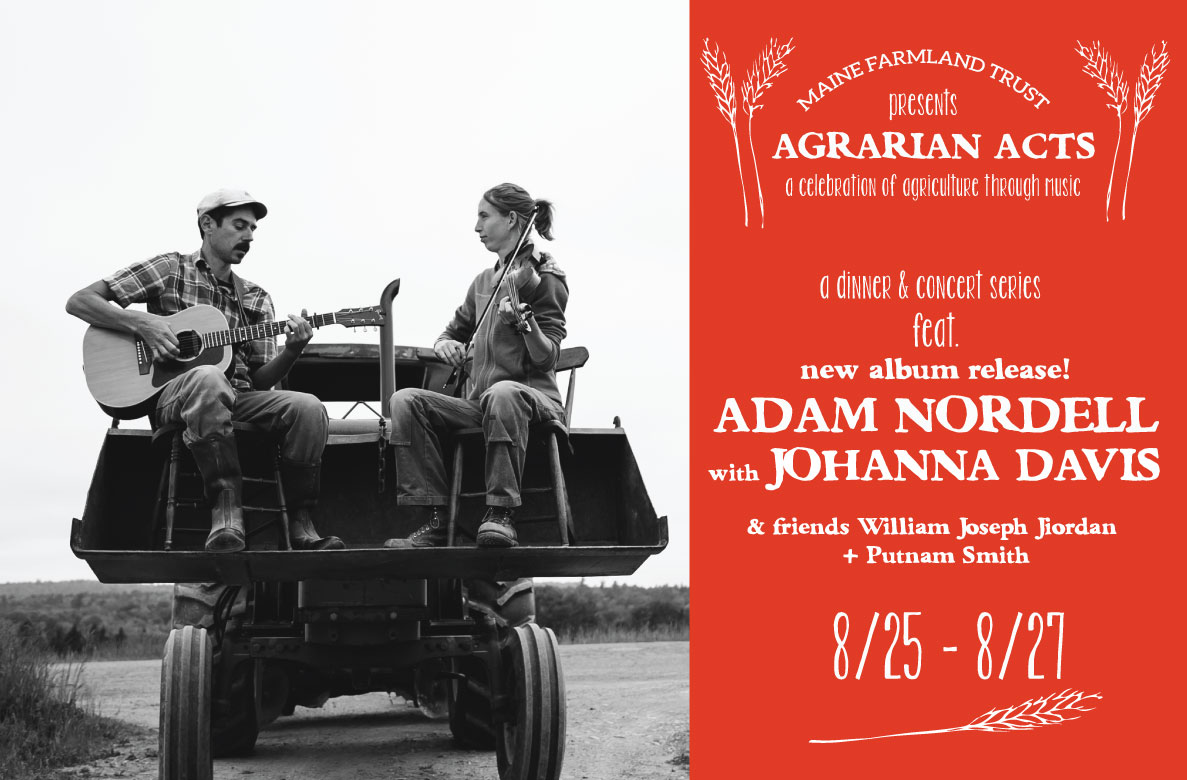 Agrarian Acts: A celebration of agriculture through music

Maine Farmland Trust will host a whirlwind dinner and concert tour, featuring a new album release from Maine musician and farmer Adam Nordell.  The concerts will take place over the course of three days: Deering Grange in Portland on August 25; The Hub in Unity on August 26; and Halcyon Grange in Blue Hill on August 27.

Adam Nordell is a Maine-based roots-folk songwriter and organic farmer.  Together with his partner Johanna Davis, he cultivates thirteen acres of south facing field at Songbird Farm in Unity and travels coast-to-coast performing high-energy, place-based folk music on guitar, banjo and fiddle as the band Sassafras Stomp.  Drawing imagery from the rolling hills of Maine farm country and his native-born Montana mountains, Adam writes lyrics etched with a clear sense of place and steeped in folk music tradition.

This past winter Nordell produced a mix of ten richly recorded songs about farming and living close to the land.  The resulting album is centered around the title track, Walk These Fields, and celebrates the beauty and stillness of rural landscapes, the struggle to make due with limited resources, and the forever surprising resilience of hope.  “You might think of this as a slow-song movement,” offers Nordell. “I’ll get the seed of a song while I’m doing field work, maybe cultivating beets. It will have accumulated all of these images from the farm and our travels, and maybe – hopefully – it will have something broader to say.”

Adam will be joined onstage by Johanna Davis, as well as William Joseph Jiordan and Putnam Smith.

William Joseph Jiordan will open the shows in Portland and Blue Hill. Born in suburban Boston, Jiordan spent the last fifteen years working as a baker and farmer by day and musician by night, playing in wedding bands, coffee houses, barn concerts and with a handful of collaborators. His latest work is a solo project that is drawing his collaborators out of their rural haunts and cottage businesses to bring a decade’s worth of songs to fruition, all rallying around lilting stories of praise, heartbreak and a wild hopefulness for humanity.

Putnam Smith will kick off the Unity show. Smith, who hails from Durham, Maine, could be an old-world troubadour fresh from the 19th Century.  After all, he lives in a log cabin, plays his Grandfather’s banjo, and prints up the jackets to his CDs on an antique letterpress.  Yet this rootsy multi-instrumentalist songwriter (he also writes and performs on guitar, mandolin, fretless banjo, and piano), steeped as he is in old-time Appalachian traditions, is very much a storyteller for the modern age.

In addition to farm-grown music, these concerts will feature a dinner sourced from local farms. Maine Grain Alliance will generously lend their mobile wood-fired oven to the event, and pizza made with flour and vegetables from Songbird Farm, fresh summer salads, and dessert will be served up family-style.

Hosted by Maine Farmland Trust, the concert series is a celebration of agriculture through music. The Trust, a statewide nonprofit working to protect farmland, support farmers, and grow a future for farming, believes that art and music have an important role to play in growing a vibrant culture of farming and food. “Art and music are powerful ways for people from all backgrounds to access the excitement and vitality of the local farm and food movement,” said Ellen Sabina, Outreach Director for the Trust. “These are vehicles that connect us to past traditions, present realities, and future hopes, and help us examine our world in new ways. That’s why we originally started an art gallery and artist residency program, and that’s why we’re so excited to present this concert series.”

The concerts will take place over the course of three days: Deering Grange in Portland on August 25; The Hub in Unity on August 26; and Halcyon Grange in Blue Hill on August 27. Tickets for each show are $20 and can be purchased online HERE or by calling 207-338-6575.

“…if Wendell Berry were a songwriter.”