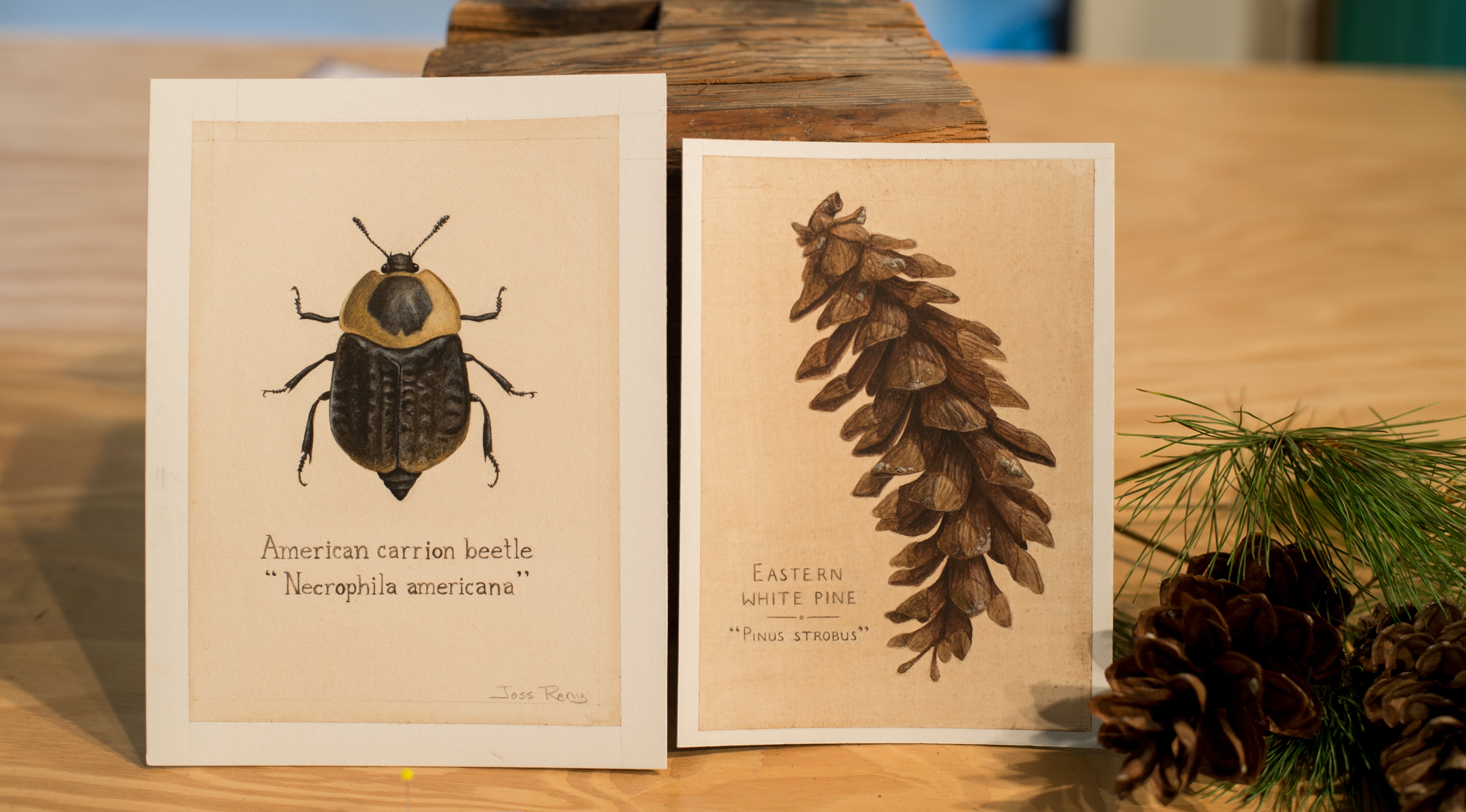 Interview and writing by Eliza Graumlich, photos by Susan Metzger

Applications for the 2018 artist residencies at the Joseph A. Fiore Art Center open early December. There will be six visual art residencies (5 for Maine artists, 1 of which is reserved for an indigenous Maine artist; 1 for an out-of-state or international artist), one performing arts residency, and one writing residency. There will also be a seasonal position for a resident gardener with affinity for the arts. FMI or contact Denise DeSpirito, Fiore Arts Center assistant: denise@mainefarmlandtrust.org.

Before she draws an insect, Daniels must first kill an insect, gently and without smashing anything. The freezer becomes a low-tech cryonics lab. After the bug thaws slightly, Daniels arranges its appendages, fashioning antennae and legs and elytra (wing casings) into a three dimensional Rorschach test. Limbs are bent to showcase joints. Wings are splayed open. Straight pins—the kind with a plastic bead of teal or magenta or yellow at the top—keep everything in place. When the bug has dried, Daniels removes all but one of the pins. The placement of this final pin is based in tradition and varies by species. For Daniels’ most recent specimen, the carrion beetle, it is the pin on the right side of the thorax that remains.

Of course, these steps are merely preparatory. Her desk has five slim paintbrushes, several shiny tubes of paint and a pencil sharpener, and all have yet to be used. Next, Daniels will tone her canvas with walnut ink and a hacky brush. She will sketch an outline of the beetle with a mechanical pencil and use a proportional divider to confirm scale lengths and widths. Then, there is watercolor, hatching, gouache and hand lettering, preferably in a Roman font.

Daniels began her residency at Rolling Acres Farm with the intention of designing a poster on garden-friendly bugs. However, upon arrival, she started drawing the living things that she found around her: wildflowers in the hay field, lupines out by the road, the aforementioned carrion beetle (found atop a dead snake that she hoped to sketch) and various species of bees. Previously, as a student at Laguna College of Art and Design in Laguna Beach, California, Daniels dedicated 60 hours per week to studying fundamentals and technique. Now, she hopes to build a portfolio.

Biological illustration is different from fine art, Daniels explains, in that the former explores the world while the latter explores the self. However, Daniels’ works seems to stand at a junction of the two genres. Her illustrations, captivating in their realism and handsome in their aesthetic, would be equally appropriate gracing the illustrious back cover of Cook’s Illustrated or the walls of a gallery.

Daniels’ residency in Maine completes a journey begun in her childhood. Her earliest memory of making art comes from a camping trip in Bradbury Mountain State Park when she was five years old. After sighting a barn owl illuminated in the light of the campfire, she asked her family for drawing materials. Though she accepted the pen she was offered, she eschewed the back of an old receipt in favor of birch bark. Later in her childhood, she made fairy houses in the lilac trees behind her Munjoy Hill home and attended a school on Mackworth Island—a piece of land donated to the state in 1946 by Governor Percival Proctor Baxter “as a sanctuary for wild beasts and birds.”

In the fall, Daniels will study Human Ecology at College of the Atlantic in Bar Harbor, Maine. This program of study—the only one offered by the college—focuses on investigating the relationships between humans and their environments. Daniels says that her primary educational goal for COA is to gain an understanding of environmental sciences, in order to inform her artwork as a natural science illustrator.