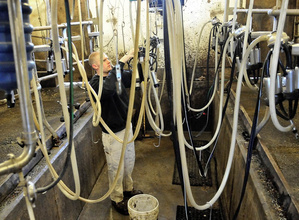 WINSLOW — How farm-friendly is Winslow?

How can the town help farmers survive and thrive?

Those are some of the questions a special committee is exploring to help promote farming, preserve farmland and support those who produce milk, vegetables, fruit, hay and other agricultural goods.

The Farmland Working Committee is reaching out to farmers and those who own agricultural land to ask what the town is doing right and wrong, and what it can do better, according to Town Manager Michael Heavener, a committee member.

Heavener also is chairman of the Sustain Mid-Maine Coalition, a group that seeks to conserve resources, sustain a healthy environment and promote economic prosperity in the Mid-Maine region.

“We would like to hear from farmers,” Heavener said. “We’re looking at this in terms of sustainability, and growing local foods  obviously is an attribute we think will be beneficial to the region.”

The Winslow committee is working with the Maine Farmland Trust to look at policies and ordinances and see if the town has any barriers that would hinder farmers, according to Heavener.

“At this point, I’m not sure what changes, if any, would occur in our ordinances and policies or what we might recommend to the council for changes,” he said.

The committee will send letters to farmers and landowners, asking for input, but in the meantime, Heavener said he hopes people call him at 872-2776, extension 5210, with questions, concerns and ideas.

She has met twice with Winslow’s Farmland Working Committee and is a non-voting member of the group.

“I’m participating and I’m doing research for them and providing them with ideas and input,” Benjamin said.

Maine Farmland Trust is a statewide organization seeking to strengthen farming in Maine, according to its website. Its mission is to protect and preserve farmland, keep agricultural lands working and support the future of farming in Maine.

Benjamin said it is essential that town and city officials talk to farmers in their communities.

“I think it’s important to let farmers know that farming is on the rise — that there is much more interest,” she said.

While the number of farms in Maine has dwindled over time, there are more farmers now in the state than there were 10 years ago, she said.

“There’s a big surge and interest in where food comes from and how it’s grown and maintained, and more people are interested in having more locally grown food,” Benjamin said.

But how does one define “farm?”

Is a farm a facility that houses dairy cattle and produces milk? Is a farmer someone who grows and sells vegetables and fruits or hay? Does property size factor into the definition?

She said barriers to farming could include the way a town regulates farm stands and signs for farm stands or farmers’ markets, as well as standards used for subdividing or developing land.

Benjamin has been working with communities on farm-friendly issues since 2011. She is actively working with Winslow, Bremen and Bar Harbor, she said.

With much of the food in Winslow originating out-of-state, organic dairy farmer Steve Russell poses a question.

If the day comes when the cost of fuel increases to the point where trucking food from, say, California, becomes prohibitive, will Winslow still have the farmland it needs to produce its own food?

Russell, a town councilor and member of the Farmland Working Committee, discussed that and other issues Friday morning in Kate Newkirk’s kitchen on Garland Road.

Newkirk, also a member of the working committee, is an organic farmer who produces eggs, vegetables and seedlings, and grows and sells seeds.

She and Russell are concerned about preserving farmland, having locally-grown foods, and making sure people do not go hungry.

They also want to know what Winslow farmers and those who have agricultural land think.

“We’re looking for input,” said Newkirk, 60. “We are going to be sending letters out, doing a survey asking people pertinent questions on what we’re doing right and what they’d like to see changed. What are their future plans for their farmland? We’re looking for ideas on what the people in agriculture really want in Winslow.”

Newkirk, an organic certifier and associate director of process and handling for Maine Organic Farmers and Gardeners Association, also has a consulting business that does inspections for other certifiers.

She works with Sustain Mid-Maine and has helped develop community gardens in Winslow. Now, there are 30 such gardens, she said.

Russell, 55, is one of three working dairy farmers in Winslow. At Heavener’s request, he sponsored a council resolution authorizing Heavener to sign an agreement to work with Maine Farmland Trust and form a working group. The council approved the resolution, 7-0.

Like Newkirk and Heavener, Russell says farmer input is critical to the committee’s work. Other committee members are Chairman Sally Harwood, Elery Keene and Jim Veilleux.

“We want people who have had roadblocks in front of them to speak up and come to us,” Russell said.

Helen Norton: her legacy is the protection of land in Harpswell, including a shorefront family farm.