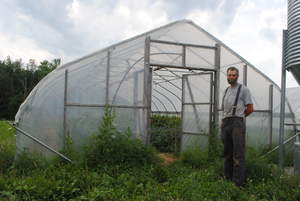 A national program that funds conservation projects on farms in Waldo County is evolving to include more small farms and support projects that focus on soil health and food security.

The Environmental Quality Incentive Program (EQIP) is the biggest program of the USDA’s National Resources Conservation Service, spending on average $500,000 to $600,000 a year in Waldo County.

Agricultural and forest producers can sign up for EQIP assistance through the USDA Service Center in Belfast by Aug. 15 to be considered for 2015 funding.

No minimum size for eligibility

The program historically has funded mostly large dairy farms doing animal waste management, but Autumn Birt, NRCS district conservationist for Knox and Waldo counties since 2002, has been working to bring more small farms into the program.

“I did hear a lot about how, before I got here, it was all animal waste projects and it was going to the same farms… but in Waldo County alone I have over 150 active contracts,” she said during an interview with The Republican Journal at the Belfast USDA Service Center.

“There’s no minimum size anymore. The rule is you have to have agricultural interest and eligible land, and be involved in agriculture,” Birt said, adding that the maximum amount a farm can earn to be eligible is $900,000.

Most EQIP money, about 70 percent to 80 percent, does go toward animal waste management to reduce runoff to water bodies and groundwater, but it also funds projects that reduce soil erosion and pesticide usage, improve forest health, and provide or protect wildlife habitat.

A local working group of farmers and individuals meets with EQIP staff to decide how much funding goes into the fund pool categories.

When an applicant is being considered for funding, it is compared only with other applicants in its category, based on a points system. The comparison is not size or need-based; it is based on how many environmental problems the project is solving.

“So if you’re fixing soil erosion, creating habitat for pollinators and stopping nutrients from going into a stream, you are going to rank higher than someone who doesn’t want to help pollinators at the same time,” Birt said.

Tom Wagner owns Providers Farm, a small beef farm in Waldo. He has recently expanded the farm to include pork and is in the process of transitioning to organic.

“EQIP has been good for us,” Wagner said. “We’ve not just survived, we’ve grown. When I started back then, I think I had 15 to 20 animals — and now we have 70 and we’re going up from there. Without EQIP we wouldn’t have existed. Couldn’t do it.”

Twenty-five years ago, Wagner said, there was a “poop mountain” outside their barn. When it rained, runoff from the pile would contaminate a nearby pond, which connected to a neighbor’s stream. It then flowed into the bay via the Passagassawakeag River, which is habitat to Atlantic salmon.

EQIP money paid for a cement run for the cows so the soil wouldn’t erode in a high-use area and a manure containment area including panels, a concrete wall and another concrete pad area that allows Wagner to get a tractor in to transport the manure to areas where it would be used as fertilizer.

Now the mountain of manure is gone. Because he did all the work himself, Wagner was able to keep the money included in the grant for a contractor, which he then used for more farm improvements.

EQIP also paid for fencing for a rotational grazing system to prevent Wagner’s cows from eating the grass down to the dirt, causing erosion and runoff into the pond and beyond, and to protect sensitive areas nearby.

Larger farms in the county also benefit from the program. Harold Larrabee of Aghaloma farm in Knox runs a dairy farm with 850 cows, 480 of which are milkers. The farm is a member of Agri-Mark, a dairy cooperative, and sells milk to Oakhurst.

EQIP funded a new silo, almost an acre in area, for hay and corn silage. The silo prevents silage leachate, a highly-toxic substance that leaches out of freshly cut of hay and corn in storage, from polluting ponds and groundwater by channeling it to underground tanks. Leachate is pumped from the tanks and added to the manure pit, another EQIP project designed by USDA engineers and built in 1978.

With EQIP funds, the Larrabees also have installed cement pads for manure and used-tire storage; removed stone walls, turning four sloping fields into one; and added diversion ditches and split-cropping to control water. They reseed recently harvested sloping fields with rye or grass to control erosion.

“This program has been tremendous,” Larrabee said. “It’s allowed us to put in cement pads to travel on, to control the water, and it’s been an education. I’ve been here a long time and now I know what to do.”

Birt said the program also funds integrated pest management plans that use a “prevention, avoidance, monitoring and spraying” approach (in that order).  The number of pests that can be present without leading to crop failure is determined and then problem areas are identified for spot treatment, rather than blanketing the whole field with pesticides.

Another project is rock removal in blueberry fields. Removing the rocks allows the field to be “flail mowed,” which is like bush-hogging, rather than burned. Burning uses a lot of No. 2 oil, the same used to heat homes, which is expensive and wasteful and leaves residue behind.

Food industry reporter Alex Martin of The New York Times wrote in a 2007 article about EQIP that the program uses taxpayer money to fund large farms’ conservation projects, which he argues should instead be treated as the farms’ cost of doing business.

To that Birt responded, “Sometimes the cost of conservation projects on these big farms could be $650,000, and we’re only putting in about a quarter of that, and with a methane digester, which can also produce power, we might only cover 1/10 of the cost.” A methane digester project costs a farm $1 million.

There is a cap of $450,000 on the amount of money a single farm can receive from EQIP. Big farms do hit that cap and then have to pay the rest of the costs for their conservation projects, many of which are required.

Waldo County does not have any confined animal feeding operations, or CAFOs, as in the Midwest, but there are large farms. For example, the Flood Brothers dairy farm in Clinton has 3,900 cows including 1,600 milkers — and six acres of manure.

“If they had to deal with that all by themselves they’d go under,” Birt said.

Wagner has a different take on the larger problem of farmers’ revenue.

“EQIP has been good for me, but overall I wish we didn’t have farm subsidies,” he said. “Farming is a very expensive operation, very capital-intensive, and has a very narrow profit margin. [Without subsidies] we would probably be paying $10 a gallon for milk and $15 a pound for hamburger.”

With all the expenses of running a farm — tractors that cost $45,000 to $110,000 each, and $2,000 in tires — that is not enough. Perhaps without subsidies, he suggested, the market would adjust and a farmer would make enough to pay for the necessary conservation projects himself.

In this market, EQIP funding does increase the number of conservation projects that are actually undertaken by farms.

Prentice Grassi, owner of Village Farm in Freedom, said EQIP funds help farmers complete conservation projects that otherwise would have been hard to prioritize, such as installing a stacking pad when they are doing fine just piling manure on the ground, or paying $1,500 for gravel to prevent a high-use area from getting mucky.

“They’re not projects that affect your bottom line,” he said, “but they do make your farm more sustainable.”

The project is an investment in the future, he said, which adds to the long-term viability of the farm.

“We’ve figured out how to pour enough concrete to put a whole herd of cows on a slab big enough to be scraped by machine into a lagoon big enough to produce enough methane to power it all,” Salatin writes, “but nobody has asked: ‘Why must the cow be on concrete?’”

In his book, he describes the system in use at his farm. Cows graze with daily rotated pasture paddocks, spreading manure over large areas and minimizing the time the cows are in tight quarters where they’re fed stored feed. In the winter, the cows are fed in an open pole shed with a central core of hay surrounded by box feeders.

To the manure that collects in the shed, Salatin adds wood chips and straw, which absorb moisture. The box feeders are raised as the bedding level rises.

Corn kernels are also added to the bedding. These gradually ferment, and at the same time natural antibiotics grow, preventing mold and fungus.

In the spring pigs are brought into the shed to root out the corn kernels, aerating the material and converting it into aerobic compost.

Birt said many people in the NRCS know and talk with Salatin, and that the program is constantly changing and adding new processes, as evidenced by EQIP’s 24-page approved practice spreadsheet.

“The truly innovative right-out-of-the woods stuff — usually from Europe, because they’re way ahead of us that way — we don’t do,” she said. “It has to be something that’s been proven, because we’re spending taxpayer dollars.”

Other funding sources for innovation

But there are other avenues offered by USDA for those kinds of projects to be funded, she said. Farmers can apply for Conservation Innovation grants and Sustainable Agriculture Research and Education grants to fund more creative projects.

Now NRCS has on its staff scientists on the cutting edge of soil health, which Salatin advocates should be the focus of agriculture.

Ray Archuleta, a NRCS conservation agronomist, advocates using cover crops and feeding the soil, and often says “if you feed the soil it’ll feed everyone else,” according to Birt. With a mix of 10 to12 cover crops and no fertilizer, Birt said, Archuleta has a better harvest than many farmers who are using fertilizers and irrigation.

The soil health philosophy has made its way to the top of the agency.

“Our new chief chief [Jason Weller] has made our mandate soil health, because he’s looking at population growth and how we’re not going to have the petroleum to put into fertilizers to put in the fields by 2050,” said Birt.

Along these lines, food security is another new priority, and high tunnels — hoop houses for extending the growing season for in-ground crops — are now being funded through EQIP for that purpose. These have brought a large number of new farmers into the program, Birt said.

Earlier versions of the 2014 Farm Bill had as much as $1.9 billion cut from the EQIP budget, but the final version cut only $1 billion. Still, Birt says the main problem with the program is funding, because she can only fund about a third of the requests that come in for Waldo and Knox counties each year.

“There have been people on a wait list for five years,” Birt said.”That’s an environmental problem just sitting there.”

This story has been updated from a previous version to correct the limit a farm can make to be eligible and the funding cap for individual farms.

‘Growing Local’ film series to be screened throughout the state