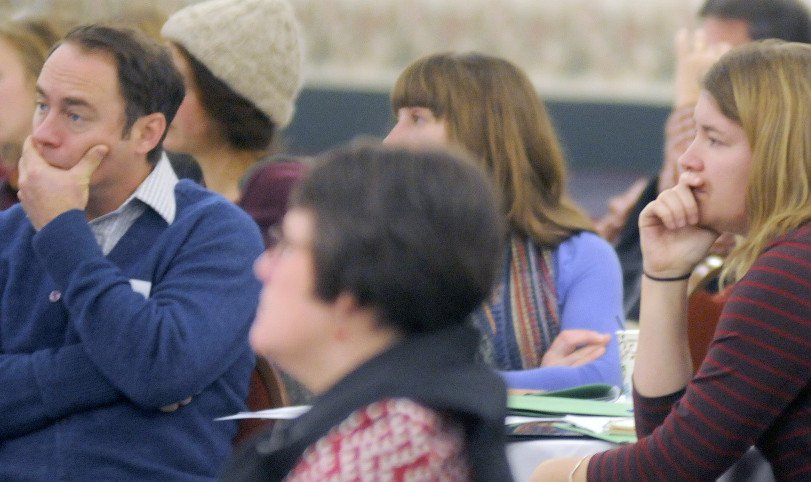 The Maine Farmland Trust estimates as much as 400,000 acres of farmland will change hands over the next 10 years.

AUGUSTA — There is a conflict within the farming industry, and it’s one that doesn’t have an easy resolution.

Many young farmers are looking for land but finding the costs associated with acquiring acres for farming to be prohibitive, while older farmers wanting to retire are encountering challenges with transitioning their farmland and ensuring it continues to be used as a productive piece of property.

Amanda Beal, the president and CEO of the Maine Farmland Trust, said the biggest issue for the state’s farming industry is farmland access. At its second Farmland Access Conference at the Augusta Civic Center Monday, officials said they expect as much as 400,000 acres of Maine farmland will change hands over the next decade, but officials and farmers alike question whether this land will continue to be farmed.

“There are plenty of people who want to do the farming,” said Brandeis University associate professor Brian Donahue, who gave the conference’s keynote. “The big issues are connecting them to the land and giving them the ability to market stuff so that they can survive.”

Nate Crenshaw, 26, of Dresden, spent the last few years working on other peoples’ farms. He and his partner, Sarah Haven, have decided they’re interested in starting their own farm and have begun looking into what opportunities exist in the area.

“Given our own financial limitations, realistically we’re probably going to have to find a fairly generous lease that we can work with,” Crenshaw said. “The cost of the land and the infrastructure is the major stumbling block.”

Crenshaw said it is daunting to think of the amount of money needed to start farming, but he knows of a lot of farms, even some established ones, that are growing in size and growing crops on leased land. He said he’s seen statistics that show that new farm businesses that lease the land and are able to put more money into the business rather than a mortgage are more successful.

Another challenge for new farmers, Crenshaw said, is the lack of experience many of them have in running their own business. He’s confident in his ability to grow vegetables, but he said he “is a little shaky” in his ability to operate a small business.

“There are organizations and resources out there to help, but there’s only so many hours in the day,” he said. “It’s hard to find the time to farm full time as my career as well as go to all the conferences and workshops and take small business classes to be successful.”

A conference like this one, Beal said, is the perfect opportunity for both experienced farmers and those just entering the industry to learn and also network with individuals from around the state. About 150 people were expected to attend the day-long conference.

“These issues are why we’re here today,” Beal said.

On the other side of the spectrum, the transitioning of farmland from older farmers has its own set of issues that Maine Farmland Trust is helping address. Beal said there’s an increasing awareness that industry officials need to be engaging in conversations with older landowners earlier in their careers about transitioning. The longer they wait, she said, the less flexibility there is with each decision.

Donahue, who has been farming for about 40 years, said for older farmers, their land is their retirement account.

“They tend to be land-rich and cash-poor,” Donahue said. It isn’t so easy anymore to pass farmland to a younger generation. Often, he said, the landowners have to sell their land to their children.

Gary Bahlkow, a North Yarmouth farmer who has accumulated nearly 100 acres of land over the last 20 years, is just starting to transition his ownership to his two daughters. He recently transferred a few acres and the land’s original 1806 farmhouse to his kids, but the complete transfer of the acreage will be a longer process.

“The challenge is to extricate myself and make sure it’s not a burden on them,” Bahlkow said. The difficulty for young farmers is that the value of the land is high, he said, and an agricultural use isn’t usually enough to support those high land values.

Bahlkow said his path of least resistance would be to sell his valuable land in the greater Portland area to a developer, but he has no guarantee what that land would be used for. Keeping quality land producing quality agriculture is a challenge.

Beal said farming is one of the few industries in Maine that is attracting young people. But she also said the state needs more farmers.

“Absolutely,” she said. “We’re seeing young people come into the state, and we’re attracting them to farming.”

Beal said the state has good organizations supporting new and beginning farmers, which is a draw because people come here knowing they can get the support they need.

“There are plenty of people who want to do the farming,” said Brandeis University associate professor Brian Donahue, who gave the conference’s keynote. “The big issues are connecting them to the land and giving them the ability to market stuff so that they can survive.”

Land in Transition: The farmland owners

By Caitlin Hopkins During a recent annual monitoring visit to McLaughlin Farm in Wilton, I…