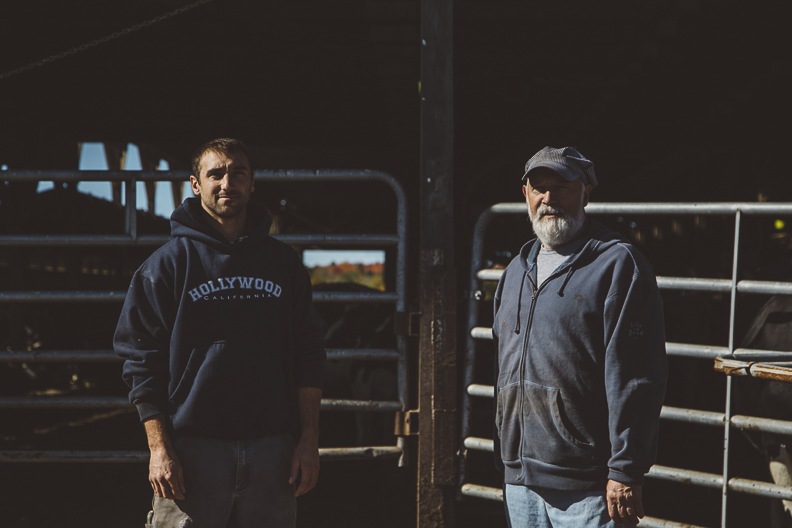 Another in our series about dairy farmers in Maine. In many ways, dairy farms are the cornerstone of Maine’s farming community.  Dairy farmers steward large tracts of farmland for feed and forage, while supporting the feed stores, equipment retailers, and large animal vets that all Maine farms rely upon. Of the 400,000 acres of farmland that will be in transition over the course of the next decade, we anticipate that a large percentage of that land is currently in dairy farming. What will happen to that land, and the infrastructure and communities it supports?
While farming in Maine is growing in many ways, Maine’s dairy industry has not seen the same kind of growth. Young dairy farmers are few and far between, often deterred by low milk prices and high start-up costs. Those who have bucked the trend and have decided to become either first-generation dairy farmers or to continue their family’s farm, have an important role to play in ensuring that dairy farms remain the foundation of Maine’s farming landscape.
“Make hay while the sun shines” is something everyone says, but it’s a literal reality for dairy farmers. The first time I visited Walter and Austin Fletcher of Fletcher Farm in Pittsfield, Austin was cutting grass in the fields until dark, racing against the disappearing autumn daylight. Because it’s been such a dry summer, dairy farmers who rely on productive pastures that have been struggling to make a second or third cut before fall sets in, and the hustle for hay (and very few rainy rest days) means that it’s rare to catch father and son Walter and Austin in the same place at the same time.
While Austin cut hay, Walter gave me a tour of the farm. The barn is outfitted with the Cabot logo, easily recognizable with the signature red and black checkered background. While walking around the farm and watching the evening milking, I was struck by how orderly and calm the farm is. All the cows were resting or munching contently in their quiet spaces, each one set up specifically for each group of cows, depending on age, health, and milking/fertility stage of life. The Fletchers take good care of their herd, from the calves up through the older cows, the latter of which are housed close to the barn for comfort and accessibility. Everything on the farm is done without fanfare, but with a tremendous amount of respect and care for the animals that produce the farm’s lifeblood: milk.
Walter and his wife Edna bought 500 acres in Pittsfield in 1980 and started Fletcher Farm. Walter grew up on a dairy farm in Massachusetts and he can’t imagine a different path. “I really think that [farming] chose me,” said Walter. “At first it was a dream that we made real. Than a challenge to be successful not just as a business because farming is more than business it’s a way of life.” He and Edna raised three children on the farm. Austin, the youngest son, left for school and worked elsewhere for awhile but has since come back to join the business. Right now, the father and son team work together as partners in the LLC, from before sun up (morning milking starts at 3:30am) to sundown; the plan is for Austin to gradually take over the farm as Walter slowly transitions away from full-time farming.

Though Austin grew up on a dairy farm, he wasn’t always sure it was what he wanted to do for a living. “There was a time in high school when I definitely wanted nothing to do with it,” he said. “I didn’t hate it, but I didn’t think I wanted to do it.” But after leaving Maine and working other jobs and on other farms, Austin felt the pull pack to his roots. At 33, he’s happy to be back in Pittsfield, working alongside his dad and preparing to continue the family business. “There is a personal satisfaction,” said Walter, “a sense of accomplishment, when your children look at what you have done and see something worthwhile. And when one of them says to you ‘I see what you’ve done and I would like to be a part of it, to build on it and carry it forward,’ it is the greatest compliment that I could receive. It makes me very proud.”

Dairy farming is a tough business. Luckily, Austin isn’t starting from scratch; he’s building on the strong foundation laid by his dad. When he’s not engaged in farm work, Walter is involved in making sure that farming has a future throughout Maine, and is an active board member of Maine Farmland Trust, Agri-Mark and Cabot Creamery Cooperative. Though sitting on various boards means adding a lot of travel and meeting time onto his already full farming schedule, it’s important to him to be involved and work with the wider farming community. As Treasurer for Agri-Mark, Walter represents the concerns and interest of over 1,000 dairy farms and farming families. It’s a responsibility he takes very seriously, evident in his measured, respectful tone when he speaks about everything from the way Agri-Mark works to the way they organize their cows on the farm.
There are challenges ahead for Maine’s dairy industry as farmers retire and land changes hands. Dairy farms like Fletcher Farm that are transferring to the next generation and staying in the family, are increasingly in the minority. But despite an uncertain future, Walter and Austin are hopeful, and doing all that they can to ensure that dairy remains a key part of Maine’s farming landscape.