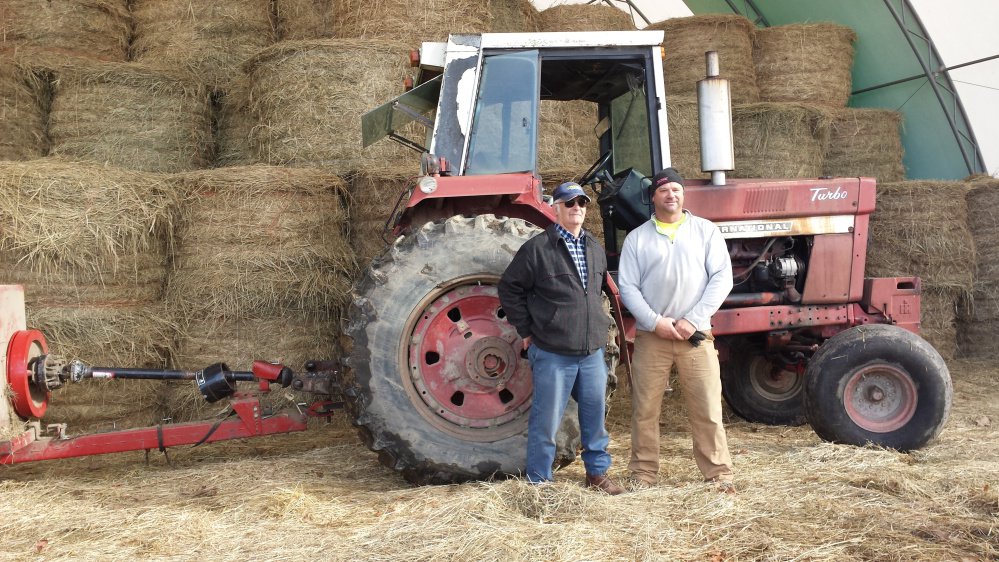 Wayne Hapworth, left, stands with his son Kevin Hapworth in one of the buildings that stores their hay bales on the Hapworth Farm in Winslow.

Most mornings Wayne Hapworth, 69, is at the Flatlanda’ Diner in Fairfield by 9 a.m. It’s a routine that gives him a reason to get cleaned up; in a farmer’s life, a fresh change of clothes only lasts so long. By the time Wayne arrives for breakfast he has already milked one hundred cows after catching his usual four or five hours of sleep.

Wayne’s wife Linda always said she didn’t want their farmhouse to smell like a barn and Wayne has continued to honor that request in the four years since her passing, leaving his boots and barn clothes by the door when he enters, and keeping up his morning routine of shaving and showering for breakfast.

But the visit to the Flatlanda’ is an homage to Linda too. In their 45-year marriage Wayne and Linda spent many mornings at Bonnie’s Diner, a farmhouse turned restaurant that stood close to Hapworth Farm in Winslow, sandwiched between the mighty Kennebec and its smaller tributary, the Sebasticook. Although the restaurant is now out of business, the signs are still up; Wayne passes the ghost of Bonnie’s on his way to the Flatlanda’ in Fairfield.

Now Wayne meets up with Sheila Pepoli, the woman who nursed Linda between cancer treatments, the woman Wayne called when, after Linda died, he was staring at a washing machine, wondering how to use it. For 41 years, Linda managed the Hapworth home, put three kids through school, and ultimately returned to school herself, earning an associate degree and taking up a job at the Maine Board of Overseers of the Bar in Augusta, all while running the dairy, keeping the books, and—for twenty years—milking beside her husband every morning.

Of course, when there is a death in the family of a farmer, the chores don’t stop. Wayne and Linda’s daughter Suzanne picked up the books and farm management tasks where her mother left off. Wayne’s righthand man—his partner—is his son Kevin, who was there working alongside him, haying, and milking and maintaining while grieving Linda’s death. The farm has two other part-time milkers: one for the morning, one for the evening. The Hapworths do the work of many men on a farm of 400 acres, plus additional leased fields.

And now they have Sheila too, who jokes that she’s part-time because she doesn’t work on Sundays. Her reverence for the Hapworth clan is clear as she describes father and son, tearing up in the process: “I’ve never worked with two kinder and more honest men in my life, than these two guys.” Sheila tends to the calves—born continuously throughout the year—and provides some social sustenance for Wayne as well. They meet at the diner to strategize and plan their day, peppered with interruptions and friendly jabs from friends, neighbors, fellow farmers, and family members. Wayne introduces his cousin by saying: “Sandra spent a lot of time on the farm growing up. We used to saddle up the heifers and go for a ride!”

But on this November day, much of the talk is about football, not farming. One of Kevin’s sons is an athletic prodigy, currently a football star leading his team to the state championships.

The call of farming holds no sway for the grandkids. After Kevin, 48, there is not another Hapworth to pick up the fifth-generation legacy.

Back at the dairy, taking refuge from the cold, Wayne jokes that his ancestors must have broken a wagon wheel on their way south. He shares a picture of his great-great grandfather Zelotes Hapworth—born in 1844—standing in the spot where the driveway is now. Wayne says, “Every generation you manage to add a little bit to the equation.”

Now the question is: Who will do the adding? “The hard work is done,” Wayne says. “The barns are built, the land is there, the account numbers are there; whoever comes behind us doesn’t have a free ride, but the hard work is done.” Wayne makes it clear that while farming still isn’t “yard work” the physical labor is easier than it used to be thanks to advances in the industry and improvements in equipment.

Hapworth Farm itself has often been a site of quiet innovation. Wayne’s father built a milking pit in their parlor—an ergonomic design that puts the milker at shoulder level with the cows’ udders—that was ahead of its time. And Wayne’s Uncle Lee recalls that Hapworth Farm had the first round hay baler in the state, which turned out to be something of a roadside attraction; cars lined up along the field to watch the action.

People in the dairy industry like to say that there are only two people in the country who understand milk pricing and they’re never allowed to fly together. The work of the farm is not just labor, but finance, management, marketing, and even advocacy. It is a remarkably complex industry, but Wayne has never shied away from that complexity. For many years, he was the president of the Boston Milk Producers. Wayne has worked on farming legislation between milkings, he has tried joining coops and diversifying with beef and hay products; he has been always ready to experiment and pivot. The Hapworths are nothing if not resourceful.

Wayne says that the secret to success is simply repairing everything yourself. And he means everything, from fences to engines. Everyone laughs when Wayne says, “If you want something fixed you just tell Uncle Lee it can’t be repaired!” Uncle Lee Hapworth is 86-years-old.  When he was growing up on the farm with Wayne’s father, there was one tractor, one car, and one engine between the two. The brothers used to swap out the engine from the tractor to their cut-down Model F Ford on Saturdays; a couple hours of work was worth the weekend joyride.

In recent years, Wayne and Kevin erected two new fabric barns (another forward-thinking choice that others are now following) to house both cattle and hay. The distinctive semicircles striped in white and green echo the colors of the new Forever Farm sign. Linda’s parting message to Wayne was that he could not let the business fail and forsake the work they’d done together or the work done before them.

It is clear Wayne does not want to be the family member who breaks the chain. Houses and barns have come and gone, but the Hapworth ethic lives on. While the next owners likely won’t share his name, Wayne hopes they’ll share his and Kevin’s commitment. In honor of Linda, Wayne placed an agricultural easement on 160 acres of his land, ensuring that the land will always be available for farming; he closed the deal with Maine Farmland Trust in May of 2014. Wayne says he’s amazed how often people say they’re glad the land won’t become a housing development or a box store. The hope is that the farm will offer a viable life for a new couple to take on, in the spirit of Wayne and Linda.

At 69, Wayne is the age at which both his father and grandfather passed away. The generations seem to live with him, and within him. As a dairy farmer, Wayne tends to mothers daily, now without the mother of his children by his side, but with their son. Each day the Hapworth’s gentle stewardship of land and life is a tribute to Linda and what they all built together, now carried on as a Forever Farm.

an update: before this piece went to print, the Hapworth family made the difficult decision to cease dairy operations due to a confluence of factors, including the plummeting price of milk. The family continues to farm, focusing on beef and hay, and has not ruled out a return to milking if conditions improve in the future.

SCARBOROUGH – For Chris Comstock, 45, public investment in his property, he says, is the…

This month, MFT is hitting the road to visit Maine farms!  There’s no better way…

Legacies in the Land

At Springdale Farm in Waldo, 92-year-old Lois Whitcomb is trying to create a future for the…