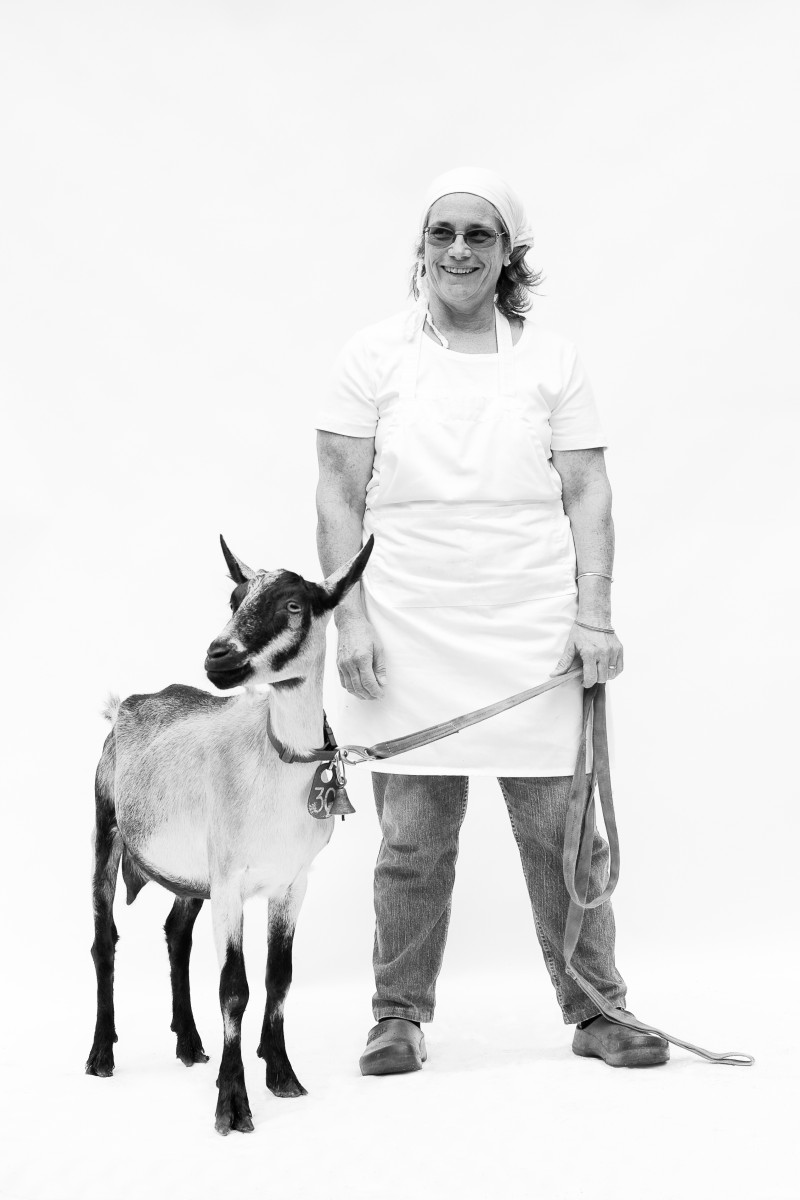 Whenever I walk into the gallery, it is the photograph of Caitlin Hunter that jumps out at me. Maybe it’s because Caitlin shares the scene with her photogenic goat, Tiny Turner. Or maybe I love that photograph because I love Caitlin’s cheese so much.

Since 1979, Caitlin Hunter has operated a goat farm and creamery in Appleton. During that time, she has perfected the art of cheese-making; she now turns out some of the best cheese in America. Beyond this, she has personally trained and mentored many of Maine’s younger cheese-makers. In short, Caitlin has been a force behind the rejuvenation of Maine agriculture.

Caitlin is one of twenty-four subjects captured by Lily Piel in a series of photographs now on display at the gallery run by Maine Farmland Trust.  The photographs honor Mainers who have helped revive farming.  They are my heroes.

Next to Catlin is a photo of Chris and Dave Colson of Durham. The Colsons were among the first farmers in the northeast to make a living by growing organic produce and selling it locally. For over thirty years they have grown good food and trained young farmers—blazing a trail that many have since followed.

Bob Spear and his family also set an example for other farmers. Over a decade ago, they transitioned a struggling dairy farm in Nobleboro into a successful diversified vegetable farm, with a vibrant farm stand and sales to stores, including Hannaford supermarkets. Bob is widely known because he once also served as Maine’s Commissioner of Agriculture; but I think his greatest legacy will be showing how a conventional farm can change, grow, and prosper.

I’ve witnessed several gallery visitors smiling and commenting when viewing the portrait of Bonnie Rukin. Piel truly captured Rukin’s spirit in this photo.  A former farmer herself, Rukin is now helping transform Maine agriculture through her leadership of Slow Money Maine, which channels new investment into farms and food-related businesses.

Herbert “Bussy” York is shown with one of his cows, Poppy. A Farmington farmer who is always experimenting, York now primarily raises dairy cattle and organic grain.  The wheat he grew last year was the first grain ground by the new Somerset Grist Mill in Skowhegan—one of the innovative new businesses that has been supported by Slow Money Maine.

Nancy Harmon Jenkins is paired on the wall with Sam Hayward. Camden native Jenkins is a renowned food writer who is passionate about good Maine food—as well as the farmers, fishermen, chefs, artisan bakers and processors who make this food available.  Hayward—perhaps best known as the creator of Fore Street in Portland—is a James Beard Award-winning chef who helped launch the farm-to-table movement in Maine. He has inspired countless chefs, farmers, and eaters.  (Both Jenkins and Hayward gave great presentations at Maine Fare 2013, the celebration of Maine food and farming held earlier this month in Belfast.)

The photo of Eliot Coleman and Barbara Damrosch is playful, saying something about how this couple works together.  Their informative books boast an international following, having led countless people to take up farming, plant a garden, or begin to eat better.  And Coleman, of course, pioneered low-input four-season farming techniques from his experiments on the farm in Brooksville.  His work has revolutionized small-scale farming.

We all know Chellie Pingree as a member of Congress, but her heart and hands remain in farming. Over thirty-five years ago, she studied under Eliot Coleman and created the apprenticeship program at MOFGA. She ran her own farm for many years before entering politics; she has now returned to those roots. Today, when not in Washington, she guides Turner Farm on North Haven—which raises vegetables and livestock and makes award-winning cheese.

Jim and Megan Gerritsen of Bridgewater have become heroes to many. These talented and hard-working farmers have for many years run a successful potato farm, focusing on mail order sales of heirloom varieties, all grown organically. But they are more widely known for standing up to Monsanto in legal battles over GMOs (Genetically Modified Organisms).  The Gerritsens display in spades the elements of character found in many Maine farmers—independence, smarts, and courage.

It’s never easy to be the first—as Nancy and Chip Gray know. The Harraseeket Inn in Freeport—which this mother-and-son team own and operate—was one of the first hotels in the nation to promote local organic food. The Grays have been farm-to-table innovators for over twenty-five years. They began, way back when, by buying produce from local farmers and hiring a young chef named Sam Hayward.  Their willingness to try something new was bold—both risky and problematic.  But they persevered, making it easier for others to follow.

Don Marean is a horse-farmer from Hollis who has contributed to farming in Maine broadly. I got to know him years ago when we served together on the Legislature’s Agriculture Committee. He went on to chair the Land for Maine’s Future board, which invests state funding in conservation projects, including many that protect working farms. Marean is now back in the Legislature, where he can once again advocate passionately for farms of all types

Piel has caught Barry Higgins on film with one of his cattle, aptly named Bull. Higgins epitomizes the entrepreneurial farmer, one who is always exploring new ways to keep at it.  At present, Higgins combines a dairy farm with a beef operation and a meat processing facility. He also opens up his Charleston farm to horse-riders for organized “round-ups” of cattle, western style. Each of these events ends with a big steak dinner, creating another market for Higgins’ beef.

Rob Johnston and Janika Eckert built Johnny’s Selected Seeds—the thriving business Johnston founded, and that the couple ran together for years, before selling it to their employees. Johnston still serves as the company’s principal researcher, experimenting with new varieties.  Johnny’s is known world-wide. But Maine farmers are particularly fortunate that Johnny’s testing and growing occurs right here—because the research is all done in our climate.

Marada and Leah Cook are quite a bit younger than Piel’s other subjects; but they have already done so much. Raised on an Aroostook farm, the Cook sisters took over their father’s business upon his death. Jim Cook had created Crown ‘O Maine Organic Cooperative as a way of moving product from a number of small Aroostook farms to downstate markets. Under Marada and Leah’s leadership, Crown ‘O Maine has grown considerably, now operating statewide. The Cooks have also ventured into value-added products, as partners in a new processing business, Northern Girl. These are critical pieces of Maine’s farming infrastructure.

Sadly, one of Piel’s subjects is no longer with us.  Russell Libby was a homestead farmer, poet, deep-thinker, and—for many years—the executive director of MOFGA. Libby was also a founder of Maine Farmland Trust, and he served on the Trust’s board of directors from 1999 until just before his death last fall. He guided and supported so many of us in so many ways.  He is sorely missed. This weekend’s Common Ground Fair provides an opportunity to remember all Russell Libby did for farming in Maine.

I can’t think of Russell Libby without also thinking of John Bunker and Stew Smith—Piel’s two remaining subjects.   Bunker is a one of America’s top authorities on heirloom apples. Over many years—often with assistance from Libby—Bunker explored back roads and door yards all across the state, helping find and save many of Maine’s old apple varieties—quite a legacy! Stew Smith served as Maine’s Commissioner of Agriculture a generation ago, mentoring Libby, who worked for him. Smith offered a vibrant vision for Maine’s small farms that countered conventional wisdom at the time. Libby and others believed in it—and with Smith, have helped make it a reality.

You can view Piel’s inspiring photographs at the Maine Farmland Trust Gallery in downtown Belfast through October 1.

Maine Farmland Trust’s John Piotti writes a bi-weekly column for Village Soup and the Republican Journal. When a column relates to farming—as many do—it is posted on MFT’s website as well.

Join us for a screening of our new film series, Growing Local! February 19: 6:30pm…

It couldn't be more simple. Think of the sandwich, take it apart and build it…