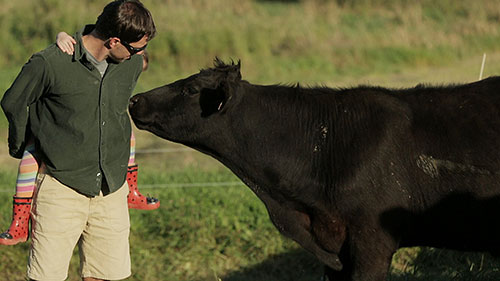 By John Piotti, from his column “Cedar and Pearl” in The Republican Journal.

Ten years ago, the best kept secret in Maine was that farming here—after decades of decline—was growing. Today, that secret is out. Today, the commonly held view is that farming is growing. In some circles, continued growth is now seen as inevitable. More and more people see the future promise of Maine to not only feed itself, but to help feed the region.

As someone who has been a champion of Maine farms for the past twenty years, and as someone who has worked hard to turn public opinion away from the persistent pessimism that was commonplace until recently, I clearly welcome this change in attitude. But at the same time, I worry that some of the newfound optimism is, well, perhaps a bit too optimistic.

It’s great that farming in Maine is growing and well poised for the future. But the truth is that some agricultural sectors are stagnant, while others—noticeably dairy—have been in decline.

Much of the growth of the past decade has been in smaller farms that raise a variety of crops and/or livestock for direct sale locally, often through farm stands, farmers markets, or relationships with select stores or restaurants. This kind of farming—now known as “local ag”—has seen impressive growth. But still, local ag only accounts for a small proportion of Maine’s overall farm production. Yes, there is great opportunity for farming of this type to continue to grow, but that is far from inevitable.

The point I make in presentations and articles is that although the fundamentals for farming’s continued growth are strong here in Maine, that doesn’t ensure that growth will continue. And local ag, though full of promise, faces its own set of challenges and problems.

This is the central theme in a new film by Bridget Besaw, Growing Local, which just premiered on September 28 at the Camden International Film Festival. The film contains three short vignettes, each focusing on a different challenge hindering the growth of local ag and the broader local food movement.

This first story, “Changing Hands,” visits one of Maine’s oldest organic dairy farms, Rocky Ridge in Litchfield, at an uncertain time of transition. Richard Beal hopes to pass the farm along to his son, Adam. Together they struggle to find a way to transition the farm without putting either of them into crushing debt—a huge challenge given the economic realities of commodity milk production. Richard’s daughter, Amanda, a sustainable food systems consultant, raises the prospect of not only milking, but only making cheese as a new way forward, one that may help the family make more money. The story ends with the family securing a successful grant to pay for new business planning.

Ben Slayton is an artisanal butcher, and a new breed of middleman at the center of the second story, “Pig Not Pork.” Ben’s two butcher shops, Farmers Gate Market in Wales and The Farm Stand in South Portland, utilize a new distribution model that connects local farmers and consumers. This kind of infrastructure is necessary for a local food economy to thrive. The film points out the need for forward-looking entrepreneurs like Ben, as well as the need for more consumers who are fully committed to buying local.

The third story, “Seeding a Dream,” showcases young farmers Ben and Taryn Marcus of Whitefield. Through boundless energy and determination, they have revived an old farm and created a new store, Sheepscot General, which has become a centerpiece of the local community. And yet, they do not own the land they farm or the store they operate. They have been lucky that the landowner is accommodating and generous. Ben and Taryn dream of the day that they may own the property; yet at present, they have little security to show for all their work.

Each story shows both hope and success, but also reveals the ever present barriers and challenges facing farmers and local food entrepreneurs. These include: the enormous difficulties inherent in transitioning a farm from one generation to the next; the need for new forms of agricultural infrastructure and new forms of local food businesses; and the realities of how farmers and farming are often held back by inadequate access to affordable land and capital.

And throughout the entire film is the recurring point that public and consumer awareness—though so much greater now than ten years ago—is still not all it needs to be, not if farming in Maine is to realize its full promise.

Watching Growing Local is a great way to learn more.

Maine Farmland Trust will sponsor a free showing of the film at the Unity College Performing Arts Center, located on Depot Street in Unity, on Friday, October 17 at 6 p.m.

John Piotti’s column “Cedar and Pearl” appears every other week.