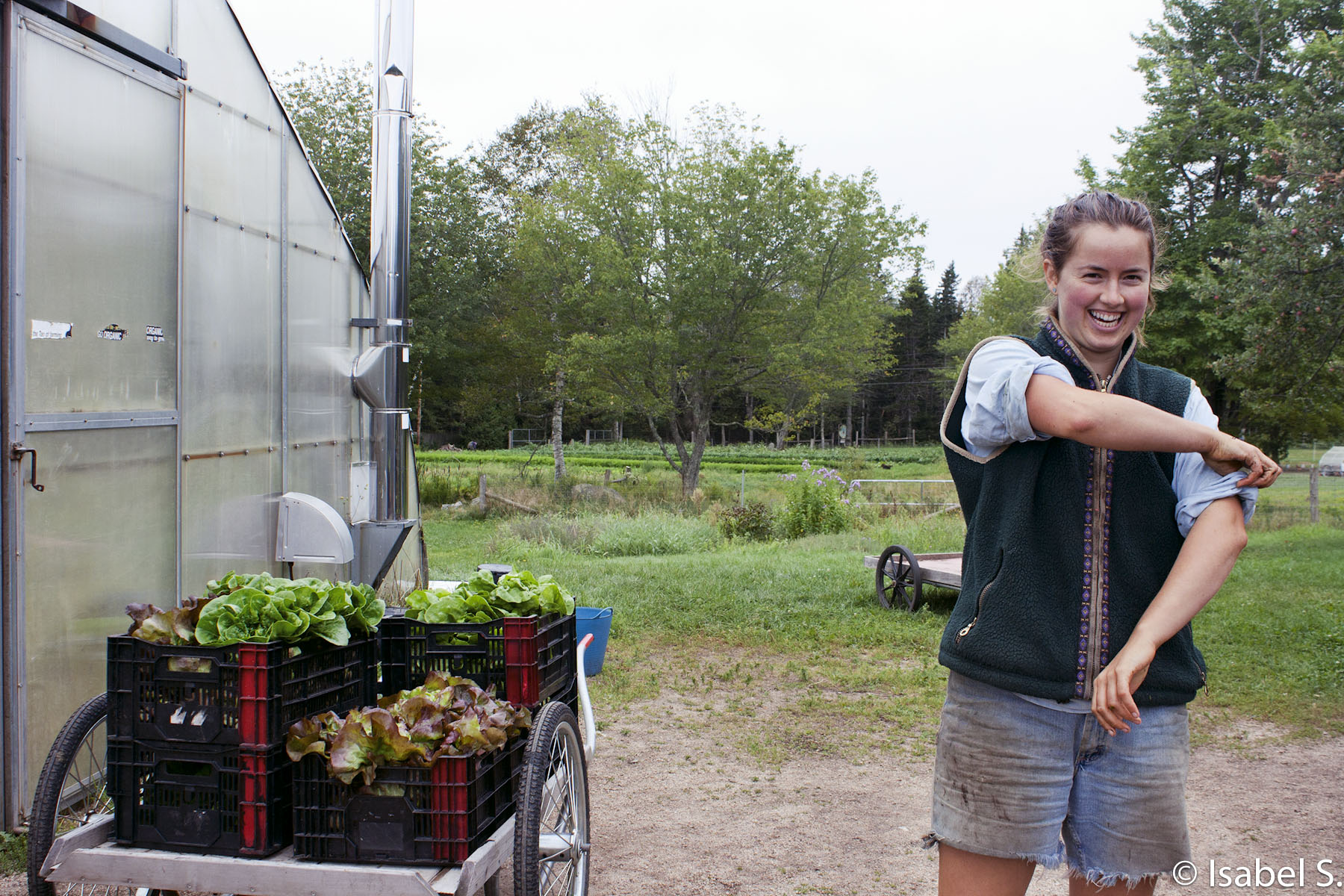 A Collection of Photographs and Writing at Maine Farmland Trust Gallery

Farming is contagious – at least to Isabel Stearns, a young photographer from Simmons College in Boston. This past summer, she drove up to Maine to visit her friend Anna, an apprentice on Four Season Farm on Cape Rosier. Through her friend, she was introduced to the diverse farms in the Penobscot Bay area. Soon Stearns found herself volunteering at Four Season Farm for two weeks alongside eight apprentices. With camera in hand, she had a taste of Maine’s farm life.

According to Stearns, who was raised on a conventional cranberry farm in Plymouth, Massachusetts, working as an apprentice on a farm is a foreign lifestyle to most of her peers today. She states: “As a result of many factors such as industrial agriculture, fast-food, and supermarkets, there is a disconnect between the food that sustains our bodies and where it comes from. We either romanticize farming as the “simple life,” or look down upon it as menial labor. Consequently, farming is easily overlooked as a career path. However, I am excited to see that young individuals of all backgrounds are carefully choosing this work.”

During her weeks in Maine, Isabel created a collection of photographs and assembled handwritten words of farm apprentices in the Penobscot Bay area. “The inspiration was my admiration and wonder for the life of an apprentice. I hope to share the beauty I see in their work,” she explains. “Rather than pursuing more financially secure or socially encouraged career paths, the apprentices have chosen to invest their time in a trade which nurtures the land, themselves, and others.”

Each portrait in this exhibit is accompanied by a statement which begins with: “I farm because…” Isabel Stearns, the photographer, and Anna Abaldo, Maine Farmland Trust’s Gallery Curator, have created an interactive response wall so that visitors, too, can tell us why they farm – “which we hope they do!” smiles Abaldo.

Stearns graduated in May, 2013 from Simmons College in Boston where she studied Business Management and Photography. She took her first darkroom processing class during her first year of high school and has since spent countless hours photographing. Not until the past year did she begin to explore digital photography. This is her first major exhibit.

I Farm Because…. Will be on display at Maine Farmland Trust Gallery from March 7 through April 28.