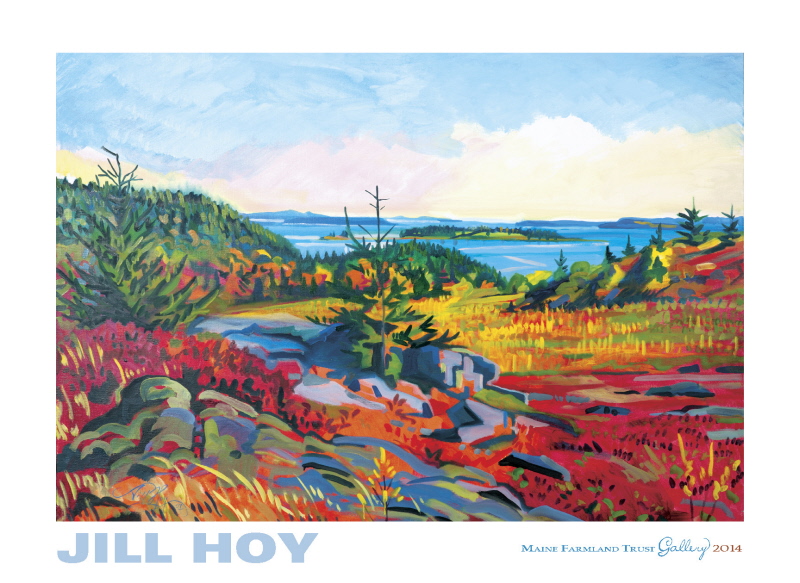 “Jill is like Maine, bright colors and powerful oceans. Maine is different, unlike any other place, and so is she.” So begins a vivid character essay about the artist Jill Hoy, widely known in New England for her large, vibrantly colorful landscapes which depict Maine’s barrens, coast and villages. One may also recognize her name as the wife of painter Jon Imber, who just recently passed away after living with ALS for a year and a half. A selection of Hoy’s paintings will be on display in the Maine Farmland Trust Gallery, as the centerpiece of the new show, “Painting the Land Alive.”

Jill Hoy has her own gallery in the center of Stonington and typically doesn’t have other galleries represent her. When asked why she made an exception for Maine Farmland Trust Gallery, she explained: “[Maine Farmland Trust’s] venture is incredibly important – it touches me very deeply. A lot of my work is about life, about energy, about sense of place…So much of the land is being developed. They’re turning over homes that have been in families for generations. It’s heartbreaking…Maine is behind that curve compared to other places, but it’s still happening.”

Jill Hoy earned a B.F.A. from the University of California at Santa Cruz and also attended the New York Academy of Art in New York City. Her work has been included in numerous solo and group exhibitions around the country. The artist divides her time among residences in Stonington, Maine, Somerville, Massachusetts, and New York City. Because she’s been a regular resident of the Deer Isle area since 1965, much of her work can be seen as a local document of place and time.

The exhibit “The Land Alive” will be on display at Maine Farmland Trust Gallery, 97 Main Street, Belfast ME, from May 2 through June 9. On the second floor, there will be select works by Philip Frey (courtesy of Courthouse Fine Art Gallery) and Lou Schellenberg (courtesy of Harbor Square Gallery). There will be an Artist’s Reception open to the public on Friday May 30 during Belfast’s first Final Friday Art Walk of the season, from 5:30-8pm. The gallery is open on weekdays from 9am-4pm. More information can be found at www.mainefarmlandtrustgalery.org.

Taxes, conservation easements, farms, and other thoughts of spring

By John Piotti March 5, 2013 Town Meetings are just around the corner. This means…

Join us for a screening of our new film series, Growing Local! November 14: 8pm…

For Dina Lee-Ford, farming has been a dream career. Second career, that is. Prior to…