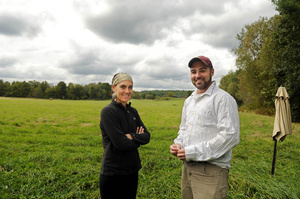 WINTHROP — From the backyard of their modern home, Justin and Suzanne Cobb and their 5-year-old son, Lorenzo, step onto a 31-acre farm that has been in the Cobb family for about 200 years.

Rolls of hay dot a field that leads up to a well-weathered barn and an equipment shed with a sagging roof.

When Justin Cobb was Lorenzo’s age, the farm hummed with activity: dairy cows being milked twice a day, crops growing in the fields and produce — including clamored-for corn on the cob — readied to be sold at a farmstand along U.S. Route 202.

His grandmother, Marion Cobb, cooked for 20 at a time in the large white farmhouse attached to the series of barns just off Old Lewiston Road.

Today, the farmhouse and barns are empty, the clapboard paint peeling and almost invisible in some places, window panes broken or missing, and no animals roaming, just an Allis-Chalmers tractor and baler waiting to do more work.

Justin Cobb, 33, and his wife, 34, envision that farm returning to life with the assistance of Internet crowd-funding.

They see grapevines in place of hay and a room where wine bottles are stored.

“I’m looking to bring new energy to my family farm,” Justin Cobb says on an 11-minute video about their plans. “My intention now is to develop a small winery and plant some grapes on these slopes where people can come and work.”

The couple are seeking money via the Kickstarter website — which recently reported funding 29,000 projects since April 2009 — and have set up a $10-a-head event at 7 p.m. Friday  at the American Legion Post in Winthrop, to tell neighbors and others all about their plans.

“It’s for community awareness,” Justin Cobb said this week. “We’re going to need a lot of community help.” And some excitement is already being generated. The “Save the Farms” video about the project garnered more than 1,000 hits in the first five days.

The farm’s current owner, Justin’s father Kevin Cobb, is working with the Maine Farmland Trust to set up a permanent agricultural conservation easement on the property, making it off-limits for development.

Then the younger Cobbs would take ownership.

If the crowd-funding nears the $80,000 Justin Cobb estimates is the minimum needed to ready the property, buy equipment and vine stock as well as a small irrigation system, he thinks he could have five acres of grapevines planted next spring.

“Part of the larger barn has to be dismantled,” he said. “The foundation is compromised and there’s not enough integrity.” Cobb said the timbers can be saved and reused.

“When I was growing up, what there was to do was throw hay and clean crap,” Justin Cobb said, as he watched his son run a toy tractor through sand.

“For a while I was the designated cow chaser, and once I made it almost all the way to Mount Pisgah.”

Justin Cobb has a degree in agribusiness management from the University of Maine and works for Sports Field, Inc., in Monmouth. Suzanne Cobb runs Panacea Yoga Studio on Cross Road, which is also near the Winthrop farm. Both would keep their jobs.

“Several people have come up to us and asked, ‘Can’t you reopen the farm?'” Suzanne Cobb said.

0n the video, neighbor Gerry Steele says,  “My whole family would just love to see the place get rejuvenated again.”

The couple say a percentage from all the products they sell will go to help save other farms. Anyone who wants to talk to Justin Cobb about the project can reach him at 441-9796.

Stacy Gambrel, who works in lands projects, at the Maine Farmland Trust, said the easement will keep ownership of the land in the Cobb family. The $25,000 to $30,000 easement is being purchased through a special program.

“It’s in an area that’s highly developable,” Gambrel said. “It’s really the type of land we want to be protecting because it’s becoming a rare commodity.”

Linking farming and environment: Common experiences in Europe and Maine Saturday, October 12 at 2:00…

Like the best farmers, Maine Farmland Trust is always experimenting, searching for new ways to…