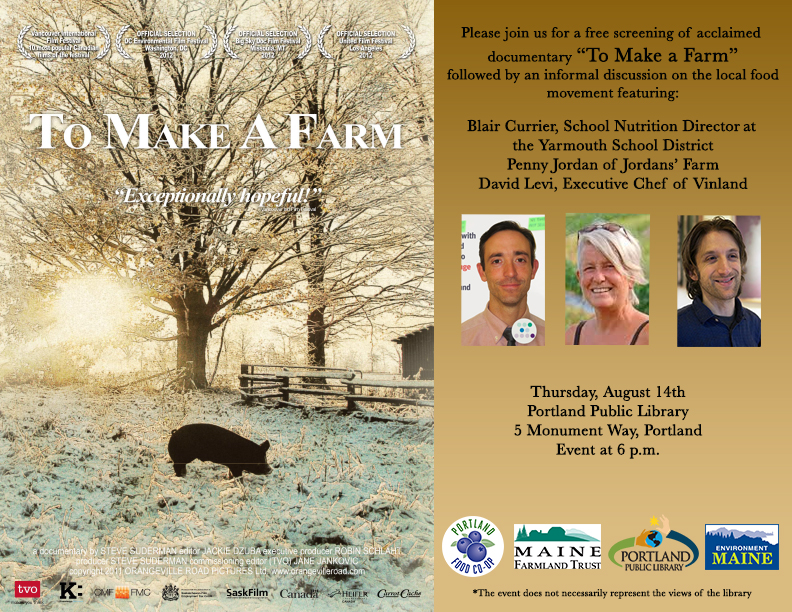 Portland, Maine: Penny Jordan, fourth-generation farmer of Jordan’s Farm at Cape Elizabeth and The Farm Stand in South Portland; David Levi, owner and executive chef at Vinland restaurant; and Blair Currier, the former local food specialist for Portland Public Schools, and Ben Tettlebaum of The Conservation Law Foundation, will be joining the public at the Portland Public Library on Thursday, August 14th, for a screening of the documentary “To Make a Farm”.

A beautiful portrayal of what the future of local food and farming may look like, the documentary explores the lives of five young people who decided to become small-scale farmers. With young Mainers taking the jump to farming now more than ever, the audience will find themselves drawing connections between the film and an incredible bright spot in Maine’s future.

Following the screening, Penny Jordan, Blair Currier, Ben Tettlebaum, and David Levi, will discuss their own diverse work on the local food movement, and field questions from the audience as to how they see the movement going forward. As the landscape of Maine’s local food movement shifts, it is the work of stakeholders throughout the state – from farmer to politician to everyday people at farmers’ markets – who will propel Maine towards a more sustainable future.WHAT: Film screening followed by Q&A to address the future of Maine’s local food movementWHEN: Thursday, August 14th at 6:00 PMWHERE: Portland Public Library’s Rines Auditorium, 5 Monument Way