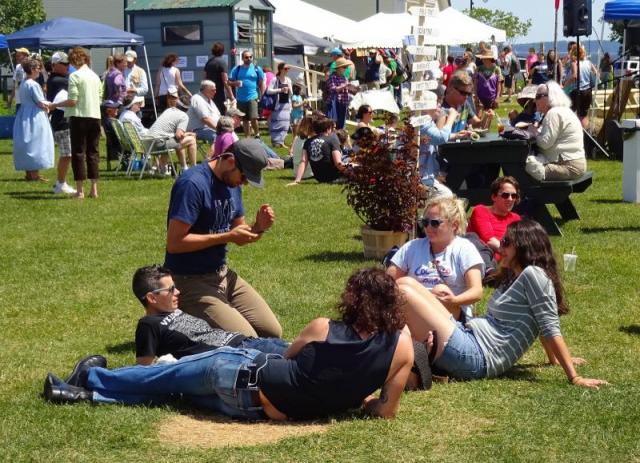 BELFAST — The waterfront was filled with a wide array of both visitors and vendors taking part in Belfast’s annual Maine Fare. This year’s event, hosted by Maine Farmland Trust and Penobscot East Resource Center, saw a sharp increase in attendees.

“We estimate that almost 3,000 people came to Maine Fare this year, which us about 1,000 more than last year,” said Ellen Sabina, Outreach Director for Maine Farmland Trust.

The two-day food festival offered a number of activities for the thousands of attendees of Saturday’s festivities, including different demonstrations, classes, and musicians. General admission to the event was free, although some of the classes and tastings were not included.

As for the sizable increase in attendance, Sabina gave credit to “awesome media sponsors this year that helped get the word out.”

She also pointed to a lot of “very well-known presenters, chefs and participants,” as another reason for increased interest in this year’s Maine Fare.

Additionally, some participants also used their own channels to promote the event, including Chellie Pingree, Kathy Gunst and Melissa Kelly.

Sabina also credited staff and volunteers as reasons for the festival’s success.

“We had an amazing crew of staff and volunteers, and couldn’t have pulled it off without them,” she said.

Maine Farmland Trust is an organization designed to protect farmland, as well as supporting farmers and the future of farming in Maine. There are more than 5,000 members of Maine Farmland Trust, each “committed to Maine farms and food.”

Maine Fare’s other host, Penobscot East Resource Center, is a nonprofit that focuses its efforts on securing “a diversified fishing future for the communities in Eastern Maine and beyond.”

This holiday season, it is more important than ever to shop local and support Maine’s…