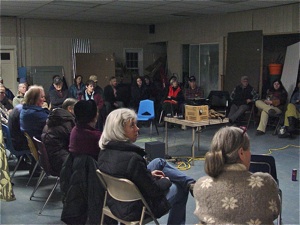 A review of a film screening by Mary Quinn Doyle, author of Unique Maine Farms book and website; original article (with pictures taken by Mary Quinn Doyle) here. We’d like to thank her for joining us at the film and for her work.

The March 8, 2015, film showing in Porter was sponsored by Maine Farmland Trust and the Sacopee Community Forum.  The Forum has planned a popular Food Matters Film Series. They were pleased that the film was able to be shown at the recently-opened Good Health Grocery on Ossipee Trail in Porter.

Those familiar with Meet Your Farmer, an earlier film produced by Cecily Pingree and Jason Mann of Pull-Start Pictures,  in conjunction with Maine Farmland Trust, were once again treated to a production that included stunning photography and captivating stories. Growing Local addresses many current critical concerns that face farmers throughout the state.

After the film was shown, members in the audience discussed how they were able to relate to many of the issues depicted in the movie. People seemed to be able to identify with the difficulties that often present when an older farmer and a younger farmer in the same family consider all the conditions that need to take place for the transfer of the farm. Growing Local clearly communicated how there is an inordinately high percentage of elderly Maine farm owners who will be faced with farm transfer arrangements in the next five to ten years.

While some farm film productions seem to capitalize on the bucolic atmosphere of agriculture, this film successfully blends the natural beauty surrounding the farmland with stark realistic images of falling buildings, butchered animals, broken equipment, and farmers facing debt, exhaustion, uncertainty, and frustration.  The efforts of Ben Slayton of Farmer’s Gate Market to tackle the numerous environmental health dangers and the drastic quality issues and marketing inequities posed by gigantic commercialized meat enterprises is reflective of a pioneer-type of spirit.

With all the challenges that are shared in the film, one might wonder if there would be a sense of despair after viewing it.  In actuality, the film seems to invoke a sense of hope and purpose.  It presents sound explanations of what can be done by consumers to help support the local food movement.

Growing Local stimulates vibrant discussions. The sense of tenderness and the feelings of genuineness depicted at each of the three farming endeavors portrayed in the film provides education and stimulates awareness and a call to action.

After viewing the film, it would be difficult to forget how beautiful the words were that longtime Whitefield dairy farmer, Austin Moore, had crafted in regard to part of the land he had cherished for so long and was willing to transfer in the vignette about Sheepscot General Store.  The close and supportive relationship that formed between land owner Dan Ridgell and young farmers, Ben Marcus and Taryn Hammer, was equally memorable.  Austin and Dan are fitting examples of how thoughtful individuals can make a difference in the preservation of farmland.

While each farmer in the film faced many imminent decisions and persistent challenges, there was still a great depiction of the valuable and often unnoticed day-to-day undercurrents of the farm, whether it be navigating through the barn or fields with a toddler on one’s back, or a young child helping with the barn chores.  Humor is also present in the film.  There was the fun-filled image of the young daughter attempting to pick up one of the barn cats, the bantering and the skeptical looks between the father and son about the need for change, or the wry reminiscing of a farmer about his previous marital situations.

Shannon Grimes proved to be an excellent moderator for the discussion after the film.  It seemed particularly relevant that the film took place at the Good Health Grocery in Porter.  Kate and John, the new owners of the store, bring an enthusiasm and work ethic that mirrors young Ben and Taryn of the Sheepscot General Store who were portrayed in the film.

Kate and John shared that they were grateful to Ben and Taryn for spending quite a bit of time sharing information with them about operating a store that promoted local food.  Kate and John hope that, in time, they too will be able to transform the Good Health Grocery into a community center where local events, and activities such as yoga, local music, and local food are all offered and celebrated.  It will be interesting to follow them on this journey.

If you have not had a chance to view Growing Local, it is strongly suggested that you catch one of its showings. Check out the list at mainefarmlandtrust.org/films

A Changing Climate and Maine’s Farms: a real threat, matched by real promise

Land in Transition: The farmland owners

Amanda Beal, MFT’s President and CEO, was recently nominated for the position of Maine’s Commissioner…