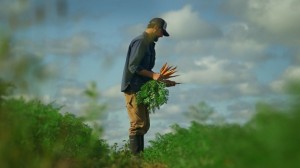 The most insidious aspect of bad eating is how easy it is, and how our society makes it seem like virtue. Food is cheap – depending on how you define “food.” Mass-produced, artificially preserved, transported great distances from processing plants – the brightly packaged foods packing supermarket shelves are affordable and convenient, even if they’re the product of dubious ingredients and animal cruelty. Why would anyone eat something more expensive and harder to find?

That’s a question the makers of the Maine documentary “Growing Local” seek to answer, and director Bridget Besaw makes a compelling, refreshingly hopeful case that all of us should, indeed, be more mindful of what we eat, and of where it comes from – even if it costs us more.

The hourlong film (showing 7 p.m. Wednesday at SPACE Gallery), made up of three short documentaries (“Changing Hands,” “Pig Not Pork,” “Seeding A Dream”), allows its message to arrive through the example of several Mainers attempting to keep Maine’s farming tradition alive. It sounds dry, perhaps, but Besaw has a light touch, allowing her subjects’ passion for both their work and the reasons for doing it to emerge in decidedly human and reasonable fashion. (Plus, the film looks great – a key component when trying to convince an audience to eat the food in question.)

The repeated arguments in favor of local, small-farm food production are convincing in themselves, and well-known to anyone familiar with Portland Buy Local. Food grown by ethical small farmers is of higher quality, and animals are more likely to be treated humanely. Money spent at local businesses, on local goods, is much more beneficial to local economies than money sent away to major corporations. The carbon footprint of local farm goods is miniscule compared to food that must be shipped from thousands of miles away. But what makes “Growing Local” more than just a polemic about the evils of factory farming or a lecture about our careless eating habits is that the film and its subjects successfully make thoughtful, responsible eating seem like something sensible, healthy, attractive – and good for Maine.

An aging organic dairy farmer in Litchfield works alongside his adult son and daughter to transform the family farm while retaining its traditional values. An ethical butcher in Wales turns his shop into a hub for a number of local farmers to sell their products. (And he’s just opened up a second location in South Portland.) A young couple teams up with a pair of sympathetic old-time landowners to perform a similar function at their farm and general store in Whitefield. Each has a similar story of idealism, hard work, and dedication to tell, and while each story ends on a hopeful note, they all stress that the only way Maine farmers can survive is if we all choose to make local eating a priority.

This past summer, MFT’s Fiore Art Center offered four virtual residencies. Instead of working at…