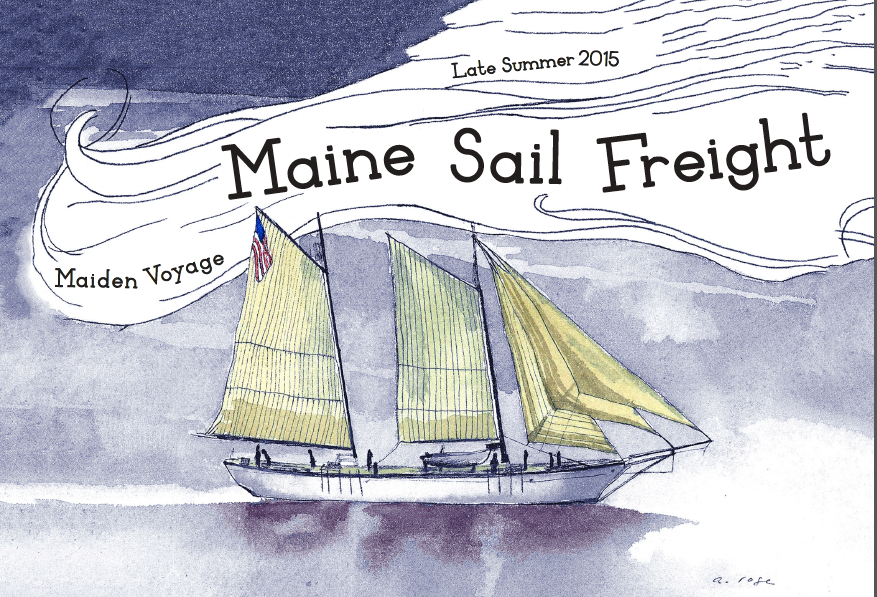 In August 2015, Maine Sail Freight will sail 11 tons of Maine-grown cargo from Maine down to Boston aboard the beloved 131-foot traditional wooden schooner, Harvey Gamage. They will load cargo (and  eat oysters) on August 23rd at Waterman’s Community Center at North Haven’s Fox Islands thoroughfare. The majority of cargo, 10 more tons,  will come aboard on August 27th in Portland Harbor.

This maiden voyage, hopefully the first of many Maine Sail Freight missions, is organized by a young farmers’ organization called the Greenhorns. An 8-year-old grassroots network, the Greenhorns’ mission is to promote, recruit, and support young people entering sustainable agriculture—people whose lives on the land represent direct-action toward a new, more regional and resilient American economy. Greenhorns celebrates and incubates the entry of new farmers in many ways, from cultural programming to media production and publishing. Along with the edible cargo, the literary cargo will include their sturdy little volume, Greenhorns 2015 New Farmer’s Almanac—a riff on Benjamin Franklin’s format with essays and illustrations by 108 young agrarians—and the “Intergalactic Mix-tape of Agrarian Revolt”—a cassette collaboration with the Landworkers Alliance, an English farmers association. Alongside these will be stacks of handy, colorfully bound Guidebooks for new growers on topics such as AgroForestry, Forming Cooperatives and Getting into Agriculture. Also on board will be their first vinyl record “Grange Future,” part of a larger Grange revival project. It’s an audio collection of farmers songs from the late 1800’s and the apex of a farmer-led Populist movement. These songs were recorded in Grange Halls by legendary performance artist Brian Dewan.

The approximately $70,000 worth of cargo, packaged in traditional boxes , will sail down the coast to Boston Harbor, where it will be celebrated and unloaded from the hold on August 30th, then transported by a fleet of cherry-red trailer bicycles to Boston Public Market and other regional outlets. The cargo will be both pre-sold online and will also be available to passers-by for purchase dockside–please come visit.

In the first week of September they will continue selling to bicyclists, stroller-pushers, and mass-transit riders at the Boston Public Market, a new municipally-owned market built as an instrument for civic life and local enterprise by the Massachusetts Department of Agriculture and the Trustees of Reservation, and other locations. Each point in the journey will be accompanied  by cultural programming relating to our common maritime history and provocative discussion about our common and maritime future.

In addition to the maiden cargo voyage to Boston, Maine Sail Freight have planned a full series of dock-side events with a suite of other sailboats to extend the drama!  Nearly a dozen additional picnics, day-events, trade-trainings,  lectures, dinner parties, live musical performances, puppet shows, historical programs, kids crafts, and side stunts.

On August 11th,  in Hallowell, Maine (just next to the capital city of Augusta) from 4pm– dusk there will be a wonderful program of family-friendly activities and a lesson on river trade thanks to the  historians at Fort Williams,  plus a small fleet of traditional Norse wooden-boats, led by the Scholarshipwrights, who will sail down the Kennebec River to pick up cargo from the farmers market at the town landing. Children will be amused + educated by the programming thanks to partners Sheepscot General Store, Duckback Work-song singers, and Grange-Corner Farm. Free and open to the public.

RSVPs are needed for the August 27th in Portland, Maine very special “stevadore send-off” dinner, and August 29th at Long Wharf, Boston Harbor for the arrival “cargo gala.” In addition to these dockside-dinners, there are 8 open berths up the coast, and back down– for adventurous sail-trainees/stevadores.  There is an application process to come on the boat, and a fee.

The public is invited to engage with trade directly, clip-board in hand, across the thresholds of land and sea, past and future.  Today, working to create a resilient, regional, prosperous farm economy will need courage, patience and the poise that comes from knowing how far we’ve already come. Squinting out to sea,  scanning the ocean’s long horizon gives us a context to orient from. The sea is here, the land is here, the wind is here– it’s our economy that we change to suit it.

MFT is pleased to announce the launch of FarmCalc, a cloud-database program that helps farmers…

MFT and Maine Organic Farmers and Gardeners Association distribute a total of $47,960 to farms…

In 2021, MFT is offering two  business planning programs for farmers: The Business of Farming…