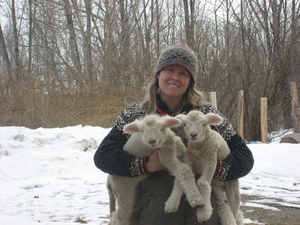 BELGRADE — Mary Perry wants to ensure that the 1870 farm she has been living on for 11 years with her three children remains farmland forever.

So Perry is attempting to protect Winterberry Farm with the help of the Maine Farmland Trust through its new Forever Farm Program, which promotes agricultural easements to prevent subdivision and non-farm development.

“Whether I am able to stay on the farm or not, it is imperative to me that this farm be protected,” Perry said. “The farm has given the kids and I for the past 11 years safety, security, a living — we’ve grown our own food — my kids are schooled here and the youngest one was born here. Whoever lives in the house, it doesn’t matter. What matters is that the farm stays a farm and is not developed.”

Stacy Gambrel, lands projects coordinator at the trust, said the Forever Farm Program and its website was launched last year.

“It’s an effort to recognize all the farms across the state permanently protected with easements,” Gambrel said. “As part of this, we have unveiling events where people hear about what it means to have protected farms. We have these signs that we’ve been putting up across the state denoting farms that will always be protected.”

She said the website lists the farms and links to their websites as a way to promote their efforts to preserve the land for future generations. Included on that list is Lakeside Orchards in Manchester.

“We’re always looking for new farms to protect,” Gambrel said. “At this point we’ve protected over 20,000 acres of farmland. We do this in partnership with other land trusts. Our goal is 100,000 acres, so we’re interested in having more farms” participate in the program.

On Thursday morning, Perry was up early, baking pies and bread to bring to the Waterville Farmers’ Market.

Her 12-year-old son, Gill, was setting up benches in the greenhouse for tomato plants, and her oldest daughter, Kenya, 16, was busy harvesting lettuce greens to bring to the market.

“I’ve made some artisan bread, honey oat and cinnamon, and just packed up my wool and some socks I knitted and some herbs, we have culinary and medicinal,” she said. “I think I’ll sort out my daffodils, they’re so beautiful, and bring them to market.”

Winterberry Farm, with 40 acres of open fields, pastures and woodland, was owned by the Foster family in 1870. They ran a small dairy, and cream was made into butter and delivered daily to Belgrade depot to be shipped south, where it was sold.

Later, the farm was known for its lamb and corn, she said. It was dormant for two decades before Perry took over.

The Perrys not only grow food for themselves on the horse- and oxen-powered certified organic farm, but also supply 75 local families with produce and meat through its community supported agriculture program.

Perry said they use their team of horses and pair of steer for the heavy work and plowing the gardens. The family raises sheep for wool, which they spin and dye and knit into socks and sell at their farm stand.

The farmstand on Route 27 also has a commercial kitchen, where she makes pies, breads, soups, jams and pickles. They also have flower and herb gardens for people to pick their own to create bouquets for events such as weddings.

“My object here is for a community-supported farm and to feed many families and have their support,” she said. “We have all sorts of lively fundraiser events to raise awareness for local farms, including our farm. Our effort is to preserve this land as a legally designated forever farm.”

It will cost the family roughly $30,000 to place the land in an agricultural easement. The land has to be surveyed and appraised and there are legal costs associated with the process, she said.

In order for her to accomplish this goal, she is relying on the support of others and is asking for donations from friends and family.

The commununity support families that buy produce from her are helping the effort, including Janet Towle, who signed on as a Farm Aid Friends of Winterberry Farm member.

The Farm Aid Friends of Winterberry Farm has scheduled several fundraising events, including a community bread and soup supper todayfrom 5 to 7 p.m. at Union Church on Main Street in Belgrade Lakes. Suggested donation is $5 per person or $15 per family for the meal, which includes a selection of homemade soups, bread and dessert.

On May 6, members of the Farmers Steer & Oxen Club of Maine are scheduled to gather at the farm for their second annual plowing event.

On May 27, a community potluck supper, silent auction and contra dance will be held at the Rome Grange Hall on the corner of routes 27 and 125. The event starts at 5 p.m. and will include entertainment by the Gawler Family and the Pineland Fiddlers.

“The important piece of all this is to let people know of the events we’re having and get people involved in our farm and for people to be aware of us being here and what we’re doing and why local farms are so important,” Perry said.

In October, Maine Farmland Trust closed on a purchased easement with Valle-Vu Farm in Ripley.…