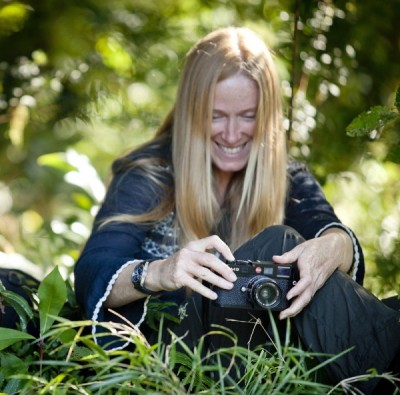 Bridget Besaw’s film project “Growing Local” premieres at the Camden International Film Festival today. The trilogy of short films looks at the various financial obstacles facing the locavore movement. There’s a story about a struggling organic dairy, where a father and son debate issues of inheritance, another about successful butcher Ben Slayton and a last about a young couple who open a general store on their farm. “Growing Local” was made as a collaboration between Besaw’s Seedlight Pictures and Maine Farmland Trust. Source talked to Besaw as she was on her way home to Friendship from the theater, where she was getting a sneak peek at how the films play on the big screen. We spoke about her tendency toward perfectionism, her favorite time of day to film and how a summer job made her a convert to Maine.

HOW DO THE FILMS LOOK? “Too dark!” Besaw said. “There are so many fires to put out; it never stops. Probably for most people they’d be like, ‘Oh it looks fine.’ ” But not for her: By Sunday, the three shorts will have been re-color-graded to get rid of that darkness.

FINDING THE FARMERS: Maine Farmland Trust gave Besaw and her producing partner, Tahria Sheather, a long list of potential subjects (Maine has a lot of farmers facing the tough business of making a living), and eventually the three stories featured emerged. That they represented dairy, meat and vegetable farming was not planned initially, but it didn’t hurt. “We said ‘Oh good, look, we have all of three major food groups represented,’ ” Besaw said, laughing.

PREACHING TO THE CHOIR: In one of the films, butcher Ben Slayton says of his Wales-based business, “Our goal is not to make people feel bad about every purchase that they make. We just want them to think about it.” What was Besaw’s goal? She wanted to further Maine Farmland Trust’s mission of preserving and supporting Maine agriculture by giving the organization a tool to raise awareness. But she worried occasionally that “we were maybe preaching to the choir,” to those who already buy local. “What we don’t realize is that yes, this is a great movement and we are all enjoying the benefits, but it’s not a sure thing at all. It’s tenuous.”

HOW SO? “There is a demographic shift happening on the farms that we as citizens need to be aware of.” Namely, that farmers are aging and a lot of young farmers, even someone like Adam Beal, who is featured in the first part of the trilogy, can’t figure out how to find a farm of their own. Adam works for and with his father, Richard, at their family dairy, but he can’t afford to buy the property outright. And Richard can’t afford to give it to his son; he needs it for his own retirement. Besaw hopes her films inspire people who care about buying local, who might even think they are already doing the best they can, to push themselves. “Can we do a little better?” she asked.

MOVING THE NEEDLE: Besaw’s background is in journalism and still photography. She was a staff photographer at the Bangor Daily News in the late ’90s, then moved on to magazine photography, shooting for Newsweek and U.S. News & World Report, among others, and eventually for outdoor-oriented publications like Outside. “After a couple of years of that I decided I wanted to go back outside in a big way and not these short, one-day assignments.” Once she got a taste of filmmaking, she fell “madly in love.” A complex love, “because it still terrifies me,” she said. “I’m in the really romantic phase with it right now, where it is like potato chips. I just can’t stop.” Films, she hopes, will help her “move the needle,” meaning effecting change.

WHAT’S YOUR MAGIC HOUR? In Hollywood, filmmakers love to shoot at the magic hour, the hour just before the sun goes down, when everything looks lit from within. Besaw has a different take, “a nasty habit” of making her subjects get up at the crack of dawn. “Farm projects are great, because the farmers get up usually before I even do,” she said. “The trick to it is to actually be there when the light is right. You can miss it by 10 minutes, which I do all the time.”

MASTER TEARJERKER: Besaw has a way of combining soft light and evocative storytelling into the kinds of films that cause tears to flow, whether it is watching a family struggle with a farm’s future or a pair of optimistic young farmers dance at their rural wedding. Is that intentional? “First and foremost I want them to be effective,” Besaw said. “And yeah, I want them to be tearjerky if that is what it takes for (the films) to be memorable.”

ADOPTED MAINER: Growing up in a back-to-the-land style household in New Hampshire, Besaw is no stranger to farming. “I think my love of being outside and growing my own food is just straight from childhood,” she said. She came to Maine when she was in her early 20s to spend a summer as a deckhand on a windjammer, the schooner Appledore. “That was my introduction to Maine,” she said. About a year ago, she bought her first home in Maine. “My husband is not sold on winter here,” she said. “We’ll see how it goes.”

A Link and Land Protection in Bowdoinham

A snippet of our recent work, from our Spring 2014 newsletter: David Asmussen of Blue…

Act to Establish the Fund to Support Local Fruits and Vegetables Purchasing On Tuesday, March…

Join us for a screening of our new film series, Growing Local! October 17th, 6pm, Unity…