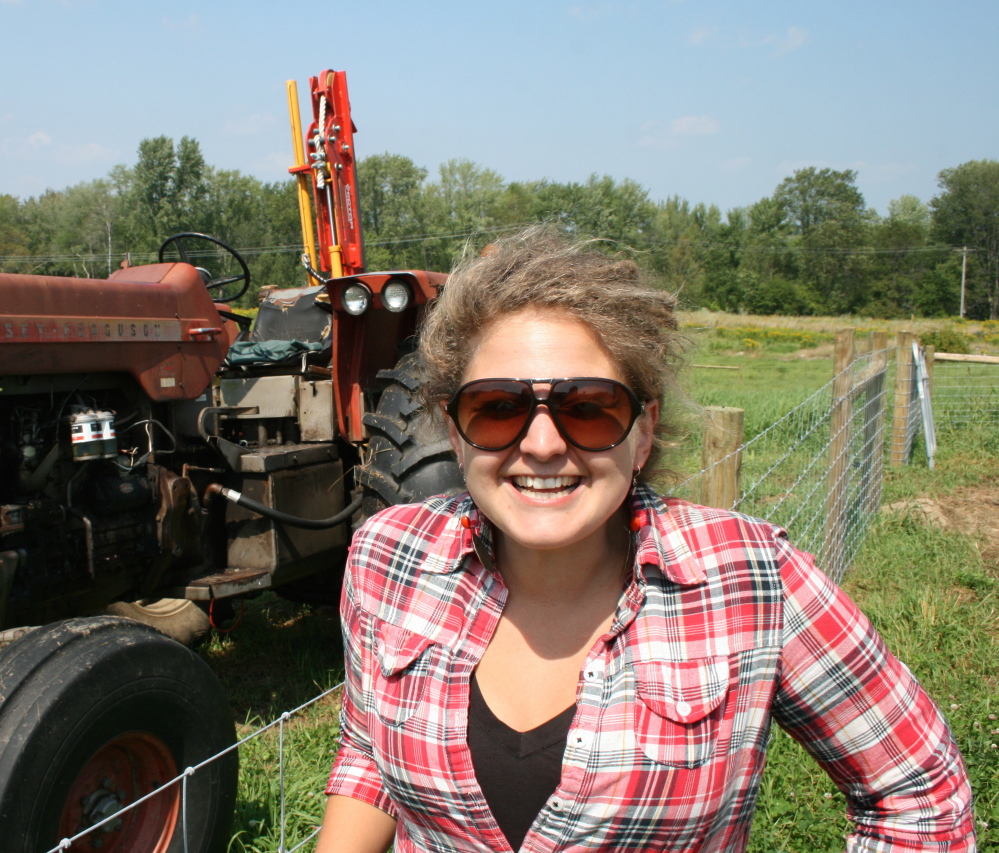 Since 2007, the Unity-based project has raised 75,000 pounds of vegetables for people in need.

Sara Trunzo is the director of Veggies for All, a Unity-based agricultural project that since its founding in 2007 has provided 75,000 pounds of sustainably raised vegetables to people in need. Created by current farm manager Tim Libby and other young farmers, Veggies for All was nurtured by Unity College and several local organizations and is now a part of the nonprofit Maine Farmland Trust.

HOW SHE GOT INVOLVED: Trunzo, 28, earned a degree in English from Unity College, but “I found it hard to be in Unity, Maine, and not be falling in love with food and agriculture,” she said. “During the time I’m getting that degree, all of my projects, all the work I was interested in, all my volunteerism was in food and agriculture. My sister’s a farmer, too, so I was primed. But I found it so sad and mind-boggling and frustrating that, in a community that is surrounded by farms and is so proud of its farming, we do have neighbors that are not eating well because they can’t afford healthy food. It seems so ironic and cruel, and also something that, with a little bit of elbow grease, could be fixed.”

WHERE DOES HER GARDEN GROW? Veggies for All keeps about 3 acres in production, about half of that on the Unity College campus. Three other plots – all in Unity – are on private property.

“Our cabbages this year are right in the heart of campus, smack dab in the middle of everything,” Trunzo said. “It’s easy for us to work with students, and it’s easy for them to see what we’re doing. And then we have other plots around the community that, essentially, we’ve been given free lease to use as agricultural lands. Oftentimes they are lands that were previously underutilized. Landowners were saying, ‘Oh, my father or my grandfather used to do XYZ in that particular field and we’d love to see it in production again.’ With this project operating on such a shoestring, we’re definitely not in a position to pay landowners, but most of the time they’re not interested in receiving payment. They’re very, very happy to have their land stewarded and being made productive for hunger relief.”

WHAT DOES HER GARDEN GROW? Fall storage crops such as carrots, cabbage, onions, potatoes and winter squash, partly because they can go into distribution boxes at the Volunteer Regional Food Pantry as late as January and February. They’re also sturdier than most summer crops. “Volunteers at food pantries aren’t produce managers,” Trunzo said. “Their hearts are in the right place, but sometimes they don’t know exactly how delicately you need to treat a winter squash. That really matters with something like tomatoes or peppers. You can roughhouse a little bit with the types of vegetables that we’ve selected, and you still end up with a product when it actually reaches somebody’s kitchen that looks like a really nice vegetable.”

Concentrating on fall crops also means that most of the hard work in the fields happens during spring and fall, precisely when Unity students are in classes and looking around for a service project.

KEEPING IT BASIC: The group stays away from anything too exotic. “We’ve decided not to challenge anybody’s taste buds at that moment when they’re getting a box of food,” she said. “They’re in a place where they need a little bit of help. I’m not at all interested in challenging them with spicy mustard greens, if that’s not something they’re traditionally used to. Or funky-colored kohlrabi. We really try to stick to the basics so that people get food in their box that they’re not intimidated by, and they feel like, ‘Oh, I know how to make this into something that my family will eat.’ ”

NUMBER OF MAINERS SERVED: Veggies for All works closely with the Volunteer Regional Food Pantry, which reaches about 800 people in Unity. They help an additional 700 people who visit smaller food pantries in the area. Food is distributed every third Saturday in Unity.

“It’s designed that way to reinforce that this is a supplement and it’s an emergency food,” Trunzo said. “It’s not the place to get your regular groceries. It’s also at the end of the month because that tends to be when folks living on a fixed income or using some kind of benefit program are coming to the end of their benefits, or they may have bills due at that time. It’s the time of the month when families are having the hardest time making ends meet.”

HELPING HANDS: A handful of regular volunteers help Trunzo and Libby all summer, but as many as 100 volunteers chip in during the year to help put vegetables on Mainers’ tables. Some are individual students who want to be more engaged in their community. But sometimes entire classes – those studying agriculture and the food system, sustainability or social justice – volunteer as a group to help with a big task. “It’s really amazing having twenty 20-year-olds helping us harvest carrots,” Trunzo said. “They really blow through that kind of task in a way that’s really fun.”

WHAT THE ORGANIZATION COULD USE: “Honestly, we need a full-sized pickup truck,” Trunzo said. “That is the No. 1 thing. Tim and I have been driving around in our little trucks for the past four or five years.”

In Maine and across New England, prime farmland is both scarce and expensive.  Many farmers…

KENNEBUNK — Two farms in Kennebunk are now protected under an agricultural easement, thanks to…