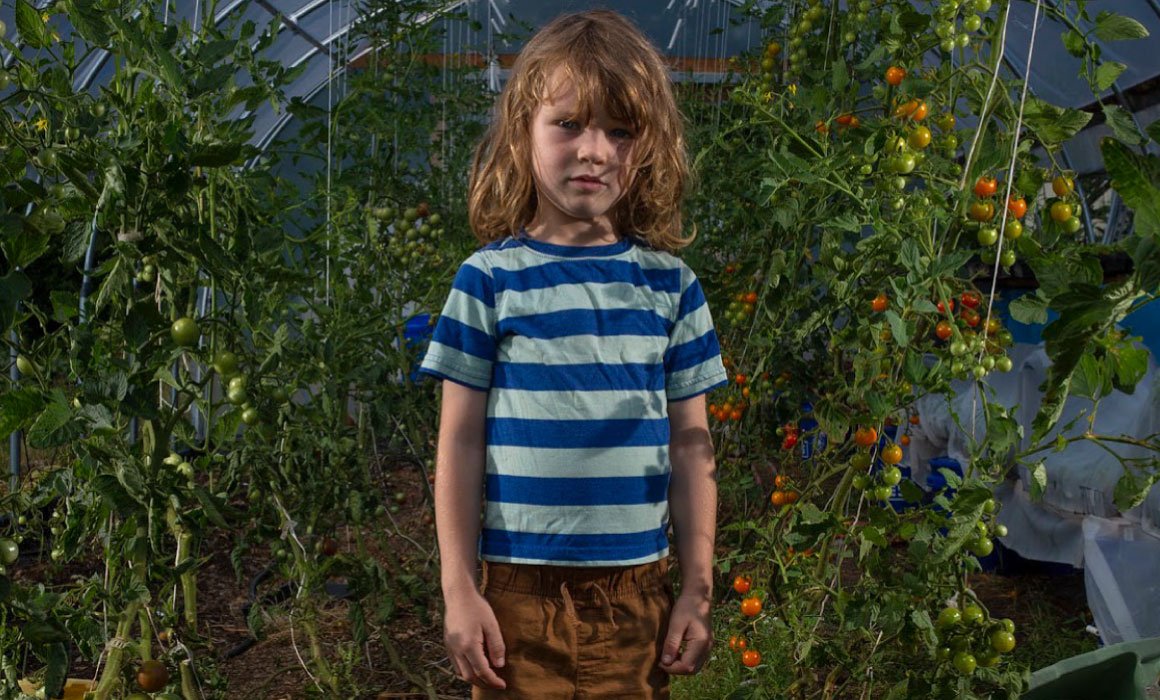 Rob is currently working on a photo series about Kentucky farmers of all kinds. Though the series is ongoing, he’s discovered that the project is broader than expected, as each county and region in Kentucky is experiencing different challenges and successes. Because of this, his work now exhibits a much wider survey of the state. His goal throughout the month is to photograph farms in as many counties as possible, helping the project reflect a more honest representation of Kentucky farming. In the first photo (left) you can see workers pulling up grass in the Dark Tobacco patch in Western KY. In the second (middle), a portrait of Ava, Trent, and Carson getting the piglets ready for a vet visit at Slippery Slope Farm in Scott Co., Northern KY. Rob comments, “the sow was not too happy about her kids being rounded up.” In the last image (right), a portrait of Carson Stolz, a volunteer from Appalachian State University, who spent the day painting the barn at Thistles End Farm in Woodford Co, Central KY.

Sophie is a PhD candidate at UNC Chapel Hill in the department of city and regional planning. She is working on her dissertation, which examines the American food system. Sophie believes the American food system connects rural and urban folks alike. She is interested in understanding how to grow a food system that provides healthy food, generates a livelihood for farmers, relies on equitable labor practices and uses sustainable practices. This month, Sophie has been working on some exploratory analysis of a dataset – almost 50,000 job postings in alternative food systems over the last 10 years. She drove from California to New Hampshire playing a game she likes to call, “spot the food system.” During this time she observed a stark reminder of the intensive and astonishingly vast industrial food system. Not surprisingly, she finds that there are fewer alternative food jobs in the corn and soy producing states like Iowa and Nebraska, but there are places with both high numbers of jobs in industrial farming and high numbers of jobs in alternative food systems — primarily on the West coast. Sophie believes “alternative food jobs “cluster” differently than food systems jobs identified in the national numbers from the Quarterly Census of Employment and Wages (which are more likely to be part of the industrial food system).”

Hear more from these two residents and learn about their projects on Tuesday, August 25th at 6PM at our Virtual Open Studio, where both residents will live stream a presentation of their final work. The presentation will be followed by a panel conversation and audience Q & A with Rob, Sophie, and MFT staff Bill Toomey, Ellen Griswold, and Sarah Simon. Opening and closing remarks will be given by Karen Giles, MFT’s Gallery Coordinator. Please RSVP in order to tune in (Zoom link will be sent upon registration).