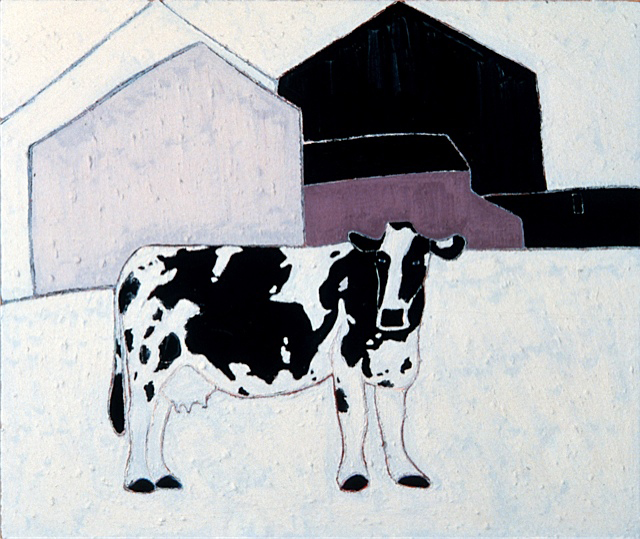 The first statement has to do with how cow paintings may be perceived in the greater world of art. Plenty of artists attempt to paint cows – few escape the judgment of being cliché. To paint a cow and wow your audience is no small feat.

The second statement relates to the state of the dairy industry in Maine. Maine farms are perfectly suited to raise healthy cows and produce delicious milk –but the federal milk pricing system makes it very difficult for farmers to cover the cost of producing milk.

These three female artists have more in common than the obvious subject matter of their art: each one has been putting her brush to the canvas for many decades and can boast an impressive resume of both gallery and museum shows.

Frances Hynes, an artist who divides her time between Maine and New York, is perhaps better known for her abstract work. Her minimalist cows, however, are noteworthy creations from her earlier figurative period which deserve to be put to pasture in a museum. They stand on large canvases, dominated by blacks and whites with occasional pinks or greens highlighting a barn, a hill, a window. It is in fact this same window motif from Hynes’ 1980’s farm animal series which became the familiar grid pattern underlying many of her later paintings – as such, these pieces pinpoint a pivotal moment in the artist’s development.

Sharon Yates, who hails from Washington County, knows her cattle. Years ago she moved from painting scenic coastal motifs to the study of cows. “I was struck by their angular forms moving in the changing light and weather,” explains the artist, who insists on painting her subjects in their natural environment. “Cows are worth the trouble because they have intensified the immediacy of my experience in painting outdoors. They ignite the landscape. Positioning myself low to the ground and close up to these animals, I see their anatomy and movements no matter how slight.” Yates thrives on the unexpected: “Ruts, wet spots, manure and fences often rule.” As do the resulting paintings: small oils with a big aura, cast with a sculptural hand.

Dahlov Ipcar behooves no introduction. A farm-girl at heart, illustrator of over thirty children’s books and still painting in her nineties, she is rightly considered one of Maine’s Masters. She was awarded the Farnsworth Art Museum’s Maine in America award in 2012 for her outstanding contribution to Maine’s role in American art. In 2013, Maine College of Art (MECA) awarded Ipcar with the Award for Leadership as a Visual Artist and the Honorary Degree of Doctor of Fine Arts. Ipcar’s original children’s book illustrations were exhibited at Maine Farmland Trust Gallery in May 2013; for Cow Tales, the artist has contributed several original drawings and watercolors from the 40’s and 50’s which previously were not for sale. Of these, the graphite drawing of two Jersey Cows, with its seemingly effortless, steady lines and delightful curves, is an absolute gem.

Additional works by the featured artists, with farm-related subject matter beyond cows, are shown on the gallery’s second floor, as well as several cow paintings by other gallery artists. Among these is a small watercolor of grazing cattle by the late Joseph Fiore (1925-2008), donated to the Trust to raise funds for farmland preservation.

Cow Tales launches Friday August 22nd with a reception from 5:30-8pm, open to the public. In addition, Maine Farmland Trust Gallery will be open for Belfast’s Final Friday Art Walk on Friday August 29 and September 26, from 5:30-8pm. Regular opening hours of MFT Gallery, located at 97 Main Street, Belfast are Monday through Friday, 9-4. For extra summer hours on Friday evening and Saturdays, please check the gallery website: www.mainefarmlandtrustgallery.org. The show will be on display from August 22 through September 29, 2014.