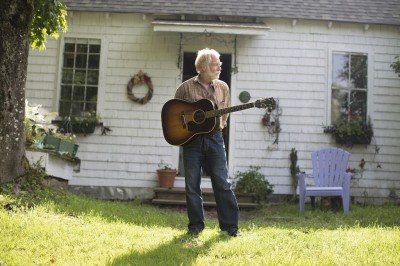 He reflects on his rural roots on his new CD, ‘Greenin’ Up.’

SEBEC — David Mallett has traveled this country near and far, and even moved away for the better part of a decade a lifetime ago to write songs in Nashville.

But his heart has never wandered far from his family homestead in Sebec. He lives in a rambling old farmhouse that his parents bought in 1938 and spent the next 40 years fixing up as they raised five kids. All boys.

It’s the same house where Mallett, the youngest of the brothers, and his bride of 32 years raised their own sons and daughter and came back to each summer when they lived down south, so the kids could experience the wonder of running in the woods, swimming in the lake and swatting black flies.

The trees that Mallett climbed as a kid still stand. The old barns are here, too, empty of most farm-related enterprise except a rusty tractor that needs the attention of a mechanic. Otherwise there are a few old trucks and a boat, and not much else.

“This road hasn’t changed at all since I’ve lived here,” said Mallett, 63, who lives in the house with his wife, Jayne. “There are one or two houses that have been added. But it’s a timeless thing.”

Mallett’s latest CD, “Greenin’ Up,” sounds timeless too. The CD is a cooperative effort with Maine Farmland Trust, which approached Mallett with the idea of making a record about rural life in Maine.

He supports the work of Maine Farmland Trust, which aims to protect farmland and keep farming viable in the state.

He had a number of songs appropriate for the project, going back to his best-known tune, “Garden Song,” which he wrote in the early 1970s after helping his dad plant the vegetable garden one spring. Many people don’t know the song by that name, but recognize its opening line: “Inch by inch, row by row ….”

It’s been recorded by dozens of celebrated artists over the years. Mallett re-recorded it for “Greenin’ Up,” and also wrote several new songs that had been kicking around in his head.

These are what he calls his Maine songs, even though he never uses the state’s name in his lyrics. But there’s no mistaking his roots when you hear the CD.

“I’ve written country songs. I’ve written pop songs. But this CD, this is the meat of the matter,” he said in an interview at his home, which is full of books, music and lifetimes of memories. “These are my rural songs, and that’s what I like about Maine, its ruralness.”

Henry put in about a mile of beans
He hoed and hoed and he watched ‘em turn green
Looked up in the sky and he said, ‘Hey man,
We should be living off the fat of the land.

Mallett wrote “Fat of the Land” after having a vision of a group of young farmers standing in a field holding their bounty in their hands. It came to him in the winter of 2011.

“Fat of the Land” could be an anthem for the farm-to-table movement. It advocates for local food, solar power and everybody working together to feed each other. The song is about living in harmony with the land, taking the best of what it offers and nurturing it.

The line about Henry planting a mile a beans is a nod to Henry David Thoreau, who wrote in “Walden” that his beans, “impatient to be hoed,” would measure seven miles if the rows were laid end to end.

Mallett does not farm himself, though he’s always been inclined. He’s done the work. His first job, when he was 12, was haying fields for a neighbor. He and his wife keep horses in a pasture on the other side of their driveway, and they tend a garden behind their house. He remembers helping his father plant peas, beans, potatoes, squash, corn, turnips and other crops.

But he figures we’re put on Earth to do one thing well, and his gift is songwriting. He’s content to be a wannabe farmer. For him, planting rows is more about therapy than production.

“So I just fart around. I want an older farmer to do it so I can just hang out with him,” he said, laughing.

He’s got about 200 acres, and keeps the fields mostly clear. He hopes to see them planted someday. Soybeans would be nice, but anything would do him proud.

Mallett wrote “Garden Song” when he was 22 or 23. He had been listening to the radio just before he joined his father out back to plant the garden. He had music in his head and work at his hands.

The first verse came as he was planting: “Inch by inch, row by row, gonna make this garden grow. All it takes is a rake and hoe, and a piece of fertile ground.”

He remembers walking around the yard humming what he had written. The next day, he was at a buddy’s house in Old Town and wrote the second verse. It was the third or fourth song he had ever written. He was just figuring things out as a songwriter. To hear him describe it, the song was a gift. He started singing and the words fell into place.

It remains his best-known song, recorded by John Denver, Pete Seeger, Peter, Paul and Mary and many others. The song set his path in music and in life. More than any other reason, the song probably is why the University of Maine gave Mallett an honorary degree this spring, for which he is grateful and proud.

To the best of his recollection, he’s recorded it just twice before this CD: The original, way back when, and a live version at a concert in New Hampshire in the late 1990s. He was eager to record it again with a band for “Greenin’ Up.”

“The original version, I was very young. I hear it now, and I sound kind of stiff and nervous,” he said.

God within me is talking
I hear with my ear and my eye
God within me is talking real low
And he says, ‘Don’t cry, don’t cry’
He says, ‘Don’t cry, don’t cry.’
The world is a faulty creation
But it works in its own little way
No room for much intervention
And I’d probably get in the way.
But here in this garden, where nobody knows
And here on the north side where nothing else grows
Oh what a beautiful, Oh what a beautiful rose

Among the new songs is “Beautiful Rose,” which is hauntingly hopeful.

Where nothing else grows comes a rose. It’s a song about spring, about things coming back to life after a long winter.

This past winter was especially hard. Not much happens up in Sebec from November to May. Not many cars pass Mallett’s house. His wife works in the local school district, so Mallett spends a lot of time alone feeding the wood stove and his muse.

Long winters in a place like this might break a lesser man, and Mallett allows that he may be showing cracks. The idea of moving south for the winter appeals to him.

But for now, he soldiers on, as the Malletts of Sebec were bred to do.

“I usually go somewhere in a blizzard just to prove I can. I get in the truck and go somewhere, and I usually come back.”

He laughs at his gallows humor.

Mallett is not a jovial man by nature. He jokes that in his next life, he wants to come back as a guy named Hap.

But his songs are endlessly optimistic and full of life

This is a story from our Newsletter a year ago, with an update: It was…

The Faces of Farms

Throughout 2015, photographer Catherine Frost will be traveling to Maine farms all across the state,…