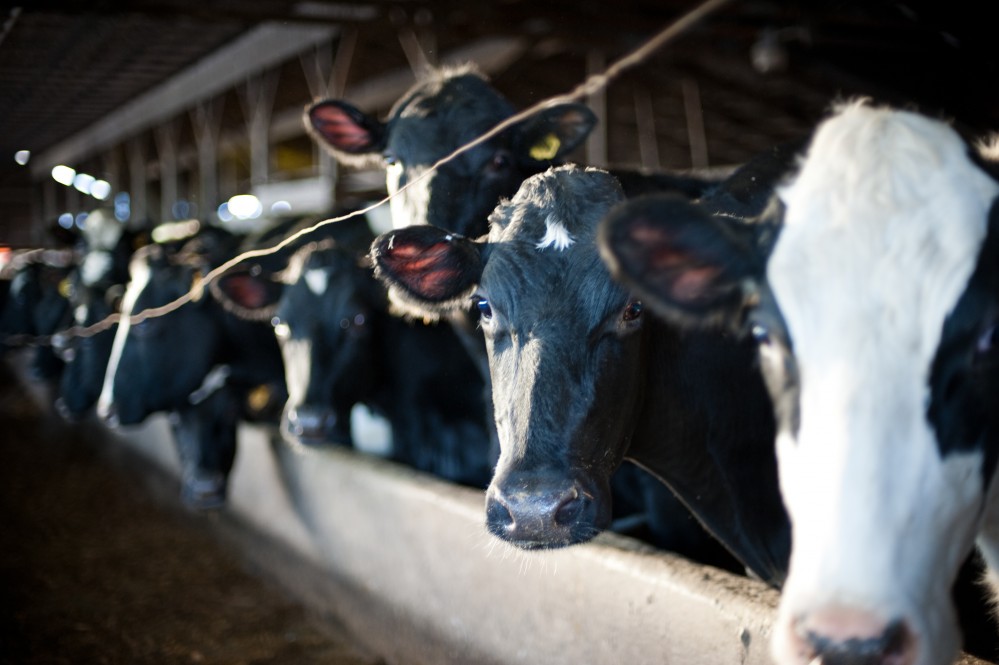 Friday night at the Winslow VFW Hall sounds like a setting for a party. But this particular evening was set for a different kind of event—a meeting to explore the future of farming in this once-vibrant farm town.

Winslow has organized a special town committee supported by Stacy Benjamin, an experienced planner who works with municipalities for Maine Farmland Trust. The committee is looking at what changes might be made—in local ordinances or otherwise—to help rejuvenate farming here. Not so long ago, Winslow boasted numerous dairy farms, a regional facility for West Lynn Creamery, two slaughterhouses, and a full-service grain store with technical experts on staff.  Today, many people hear that Winslow is down to just three dairy farms and question if farming has a future.

The VFW event was the town committee’s attempt to inform and engage more local people.  The audience of about 30 included a handful of farmers and a smattering of other local folk.  I was the night’s keynote speaker.

I speak to groups all the time and knew this could be a tough crowd. It can be hard to convey the promise of farming to people who have grown up on (or around) farms, especially dairy farms.

Many of my talks are delivered to people who have little direct experience in farming, but who sense the momentum.  Perhaps they’ve been part of a CSA or they shop at the local farmers market.  Or perhaps they read the news stories about how farming in experiencing a renaissance.  Whatever the reason, they are generally receptive to my message that farming in Maine is well-positioned for a bright future, as long as we take the right steps now.  I had, in fact, received such a positive response to a talk I gave just that morning, to the Bangor Senior College.

But I knew Winslow could be different. I chose my opening words carefully, urging folks to keep an open mind. I needed them to listen fully to what I had to say before drawing conclusions—and before dismissing me as uninformed or naïve.

I spoke about how farming in Maine has grown, being careful to point out that the growth has not been uniform. I explained how it’s been a tough run for dairy farmers—thus stating the obvious to many in the room.  But I needed to show them that I understood that the problem was not with our farmers, but rather, with failed federal policies that often keep the price of milk paid to our farmers below the cost of production.

More importantly, I needed to point out what the farmers there all knew, but sometimes forgot: that, fundamentally, Maine is a good place to make milk—because it’s cool, and wet enough to grow grass well, and close to major markets. These facts provide little solace to a dairy farmer who is losing money (or a former dairy farmer who is long out of business), but it’s critical to spread this word to the public if we care about the future of farming in Maine.

And here’s why: We are in a period of transition, when the market forces and federal policies currently at work may lead to the decline in a particular agricultural sector, like dairy, that—long term—we can’t afford to lose.  We must keep these “fundamentals” in mind if we want the public to support the positive steps needed to hold agricultural intact during this time of transition.

Dairy provides a great example of this. Since 2004, Maine has benefited from a support program that has kept many dairy farms in business, using a highly creative funding mechanism that doesn’t add to the price of milk to consumers. (I explained this complicated but elegant program in a spring column.) But the program has done little good since 2011, because the Legislature has not made adjustments needed in light of soaring grain costs. The future of this or other programs that could help dairy farmers depends on more people demanding that our lawmakers do the right thing. That will only happen if more people see how such efforts make long-term economic sense—and that argument relies on an appreciation that despite current federal policies, the fundamentals of making milk here remain strong.

Beyond dairy, I also spoke that night about why other types of farming are well-positioned here in Maine—because we have a lot of land (compared to neighboring states and provinces), abundant water, and far better growing conditions than we often get credit for. (At 45 degrees latitude, Maine has as much sunlight as southern France; and it is sunlight, not temperature, which really determines what we can grow).  Finally, I stressed how an ever-increasing number of Mainers care about where their food comes from, and that Maine is within a day’s drive of 80-90 million people. (Maine is a pocket of relatively undeveloped land surrounded by densely populated regions.)

I’m both an optimist and a realist. I’m convinced that in another 25 years, market forces could be sustaining a large and robust farming economy all across Maine.  But I also realize that such a future is not going to happen on its own. If—in the next ten years—we lose our farmers, our farmland, and our farm infrastructure, this positive vision for Maine agriculture will never be realized.  To secure such a future, we need to take active steps to support farmers, to protect farmland, and to retain, revive, or replace the infrastructure on which much of farming depends.

That is exactly what Winslow is thinking. The town committee is exploring what might be done locally—with tax policy, zoning, or land protection.  I applaud the community for doing this work, and wish more communities would do the same. (The services of Maine farmland Trust are there to help, although—as is always the case—most of the work will fall upon local volunteers.)

My talk that night appeared to go over well enough, though I suspect some people questioned my practicality.  I sat next to a dairy farmer for the rest of the event, and he told that that he liked my talk and agreed completely that there were many opportunities before us.  But later in the program, after hearing from a panel of others speakers, this farmer made comments lamenting the loss of farms and of West Lynn Creamery—fair and accurate comments, but not very hopeful. He set off another man who was quite pessimistic.  The optimism that had been in the room was fast escaping.

But the final words that night brought back the hope. They came from Heather Halsey, who is coordinating the new sustainable agriculture program at Kennebec Valley Community College. A Fairfield native, Halsey left the area for many years, during which—among other pursuits—she farmed in Tennessee, where she encountered barrier after barrier to farming, so unlike what she sees in Maine.  The developments here are so positive.  There are new education programs aimed at farmers and non-profit organizations doing great work. There are young farmers getting started here, and existing farmers innovating and growing.  Yes, Winslow may have lost West Lynn Creamery, but it now boasts the world headquarters of Johnny’s Select Seeds. Opportunities abound!

At that point, the evening did begin to feel a bit like a party. We do indeed have a lot to celebrate.

John Piotti of Unity is executive director of Maine Farmland Trust. His column “Cedar & Pearl” appears every other week.