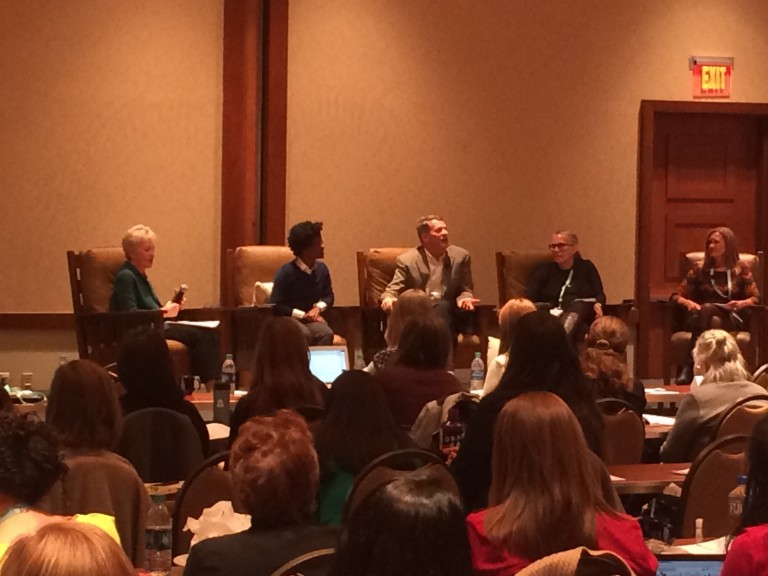 Last week, a few of us from Maine Farmland Trust traveled to Atlanta, Georgia, for a conference put on by one of our national partner organizations, Wholesome Wave. Entitled “Transforming Food Access: Accelerating Affordability with Nutrition Incentives,” the convention was geared towards discussing the methods and challenges of encouraging more low-income consumers to buy local food.

Nutrition incentives are one of the newer fields we’ve dug into as an organization, but one we’re very excited about. Couched under farm viability, they complement our other programs aimed to create new markets and consumers for Maine farmers. Because nutrition incentives are now federally funded, we are able to provide extra money to users of SNAP (formerly known as food stamps) to buy more fruits and vegetables at farmers’ markets, farm stands, and more. This has multiple benefits: consumers get better access to healthy, fresh food; our farmers gain new customers; and more food dollars stay in the local economy.

Along with other organizations nationwide, we’ve been piloting nutrition incentive programs for a few years now, and we’ve come a long way towards figuring out best practices. But there continue to be challenges in moving forward and scaling up. The good part is that after coming together, we can better define and address those issues.

One of the difficulties has been leveraging the right sources of funding to serve the people most in need. One panelist at the conference noted that this is often a problem in rural areas, which don’t have as much population density as cities, and therefore often take more funds to serve the same population and aren’t as appealing to philanthropic donors. She noted that we need to find the right metric to tell the story of rural—existing data doesn’t show the full picture.

Capturing and sharing data is one of the most important aspects of our programs, as it allows us to show our effectiveness. One state created 97% overlap between SNAP and Medicaid users—so any program that increased the health of SNAP users would decrease Medicaid costs. They were then able to justify spending on nutrition incentives because they had data to show that nutrition incentives do improve health, and would provide a net financial benefit to the state.

Data help us figure out what works (and what doesn’t), show funders the benefits of a program, and influence any policy decisions. Yet raw data isn’t all it takes: stories, too, are important—especially ones that are immediately shareable—providing a human context for some of the rough facts.

We’ve reached a point where we have pilot programs that work, but the next challenge is finding a way to scale them up effectively (a similar issue, by the way, to that faced by many of our mid-sized farms trying to reach the next level of sales). Much of this can be achieved through networks and partnerships, and we’re pleased that Maine has one of the more developed networks nationwide, the Maine Local Foods Access Network, with a team of organizations implementing nutrition incentives across the state. (We also just launched our new brand of nutrition incentives, Maine Harvest Bucks, and are accepting applications for markets and other venues for the 2016 season.)

We’re looking forward to building more partnerships, both in Maine and nationally—because you can only get so far by yourself. We’ve already seen the role public policy has in bringing us together, through the federal nutrition incentive funding (FINI) in the 2014 Farm Bill, which has provided the opportunity for much greater program support—as well as the impetus for this conference. We’re developing a robust community of practice, and know that that area has more potential for future growth.

One voice in particular we can be better at building into our networks is that of the affected populations we are trying to help. We need to empower those who can create positive change in their communities from the ground up, and include them in strategic conversations. One of our continuing questions is how much to focus on vulnerable populations versus everyone at once, because as Michel Nischan (founder and CEO of Wholesome Wave) put it, everyone should be able to afford quality ingredients like heirloom tomatoes.

Yet we also need to make it work for farmers. Good food may be scalable, but it will have to be part of more systemic change: fair wages across the food chain, a recognition that food has values beyond calories and even beyond nutrition.

In the end, nutrition incentives are a starting point, a bandaid on larger problems. Healthy should be easy, and this is a good way to get rid of some barriers, but it is only the beginning. We are excited to expand and refine our nutrition incentive programs, and develop greater relationships with organizations across the nation. And we will also be thinking: what’s next?

George Smith for The Kennebec Journal Staring out the kitchen window at our ice-covered driveway,…

From Maine Public Broadcasting Network, July 28, 2014 Farming in Maine has been rebounding. That's,…