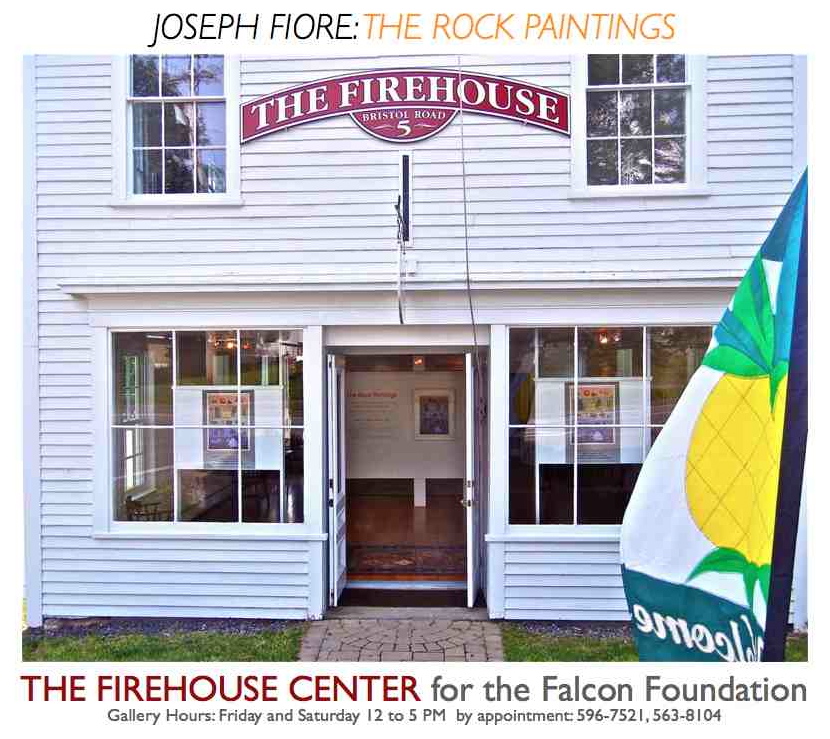 The Firehouse Center in Damariscotta opened an exhibit of Joseph Fiore’s Rock Paintings last weekend that will be up all summer. The exhibit is a unique collaboration between the Falcon Foundation and Maine Farmland Trust. The paintings were gifted to Maine Farmland Trust with the purpose of re-gifting them to other environmental organizations in Maine.

Joseph A. Fiore (1925-2008), a critically acclaimed vanguard New York artist in the 1960’s, spent his summers in Jefferson, Maine. Fiore began as an abstract painter, moving through several transitions in his life as an artist. He studied at Black Mountain College in North Carolina with Joseph Albers and Willem deKooning, and later taught there from 1949-1956. He also taught at the Philadelphia College of Art, the Maryland Institute of Design, the Parsons School of Design, and the Artists for Environment Foundation.

Maine Farmland Trust became involved with the work of Joseph Fiore almost five years ago.  The Fiores had been generous supporters of the Trust during the artist’s lifetime, and after Joseph Fiore died in 2008, the Trust – which then had just started a gallery as part of its outreach – was offered several landscape paintings as a charitable gift. In subsequent years, this gift expanded to over forty original works of art, which are gradually being exhibited and sold by Maine Farmland Trust Gallery to raise money for farmland protection as well as the large collection of Geological Works to redistribute to organizations that appreciate Maine’s environment and geology.

The exhibit will be up until September 27th at the Firehouse Center for the Falcon Foundation in Damariscotta. The gallery is open Fridays and Saturdays 12 – 5 pm and by appointment. After a special closing reception, the paintings will be transferred to recipient organizations.

See pictures of the Opening on June 28th here.