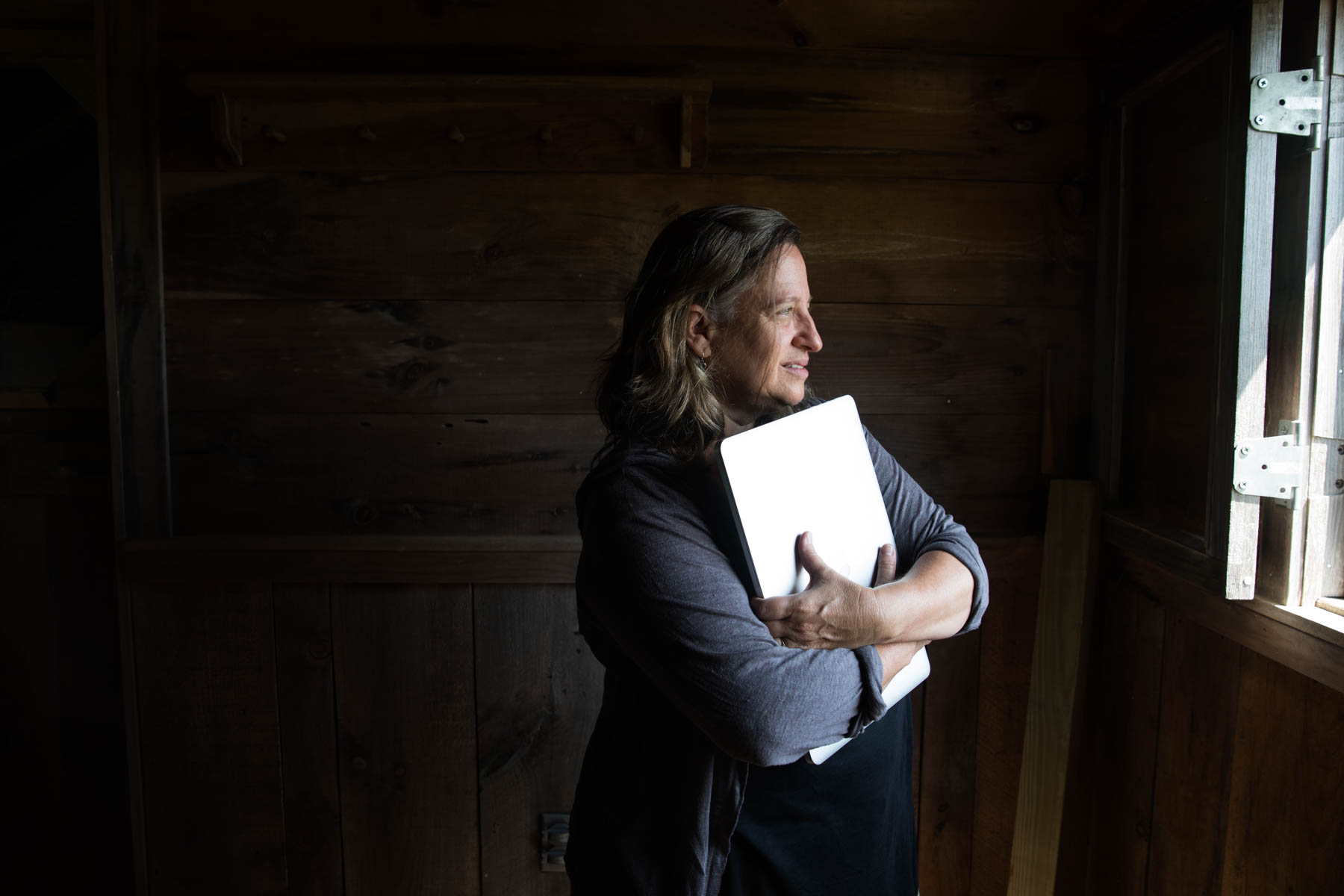 Jodi Paloni was the literary resident at the Joseph A. Fiore Art Center throughout the month of July, into August. She worked on completing a novel and also wrote weekly reflections on her time at the residency.

Big rains have come. They fall in sheet-like vertical lines that cross the field following paths rendered by wind. Tree branches undulate, gentling the picture, and then suddenly the wind is given to change, leaves turned inside out. Leaves on the maples that flank the yard, liaisons between domesticity and all the wilding beyond the fence­–––five gentle turkey hens, a hawk swooping its prey, coyote kits yipping in the night, and even the gardener wearing her straw hat who wades through the field, brushing palms over the surface of hay grasses and wildflowers as if giving a blessing or taking one, even she becomes the wild of the field. Beyond all of that, the dead continue to sleep among weasels slinking the rock wall, loons chorus their lament, and above, as always, there’s the sky, today, a dirty white.

On the desk, a manuscript in paper, completed, while incomplete, soaks up the damp, when yesterday, pages quivered and flapped in breezes that skimmed across them. The writer allows her characters to rest, to settle into their narrative, reliving their matrices of push and complacency, which is a kind of push, too. She’ll let them examine their agency, see what fits, what is fitting, what squeezes them or lays them out bare beyond the reader’s capacity, but she’ll not let them rest for too long. Time, which was once a playmate, has shifted and now bullies the house, which is only to say how cherished this house has been, and these trees and the field, the cerulean ribbon of lake in the distance.

The middle fruits come in steadily like the end days of July–––string beans of chromium oxide and indigo, cadmium summer squash, and tomatoes with medium violet skins and terre verte flesh. The last lettuces taste sharp in the mouth. The house knows what all this means, but doesn’t speak it, until it does speak it, and turns suddenly as sour as the rough and bitter leaves. Thoughts run ahead to crisper airs and tubers–––carrots, beets, potatoes–––and among these thoughts there’s a stew. The house struggles to find peace while pushed and pulled by roots and shoots timetables, June weeds turned to seed, and planet energies, mercurial. The Internet is slow. Glue turns paper soft. It’s a good day for problem-solving the humidity, for private query, for the felt sense brush stroking of a self-portrait.

Yesterday, residents traveled a near road or two to the archives of the painter this place is named for and viewed more of the tangibles made manifest by his hand, as far as any one person’s eye can turn sight into vision and ask the consumer to see all that was felt or at least to try. Some are moved by the clatter of narrative and color, others by the peace they might take from a line reminiscent of a relatable figure. All are moved by a collection of stones arranged in an old printers box set on the table under the sky light, a scrim of barn dust and splinter of hay making it holy. It’s an artifact, a childlike thing, like this summer month of days with few boundaries, where the inner wilding as been allowed a sliver moon howl swelling towards eclipse. There’s nothing as sacred as emptiness in the quiet after a howl. There’s nothing as sacred as paying attention to what makes us and to what we make.

Here’s one thing the writer now knows for certain, what she has always suspected. Process isn’t solely for the artist; it’s for embedding process into the physical plane–––the canvas, the rice paper, the vellum, the page, the clear glass jars of liquid plant pigment on the pantry shelf–––for what travels over time and through space are the material vestiges of process impermanence.

Take heart, the writer will say to herself and the others, a departure looming.

The field has witnessed your arrival. It has allowed you, has taken you in, as it also swallows the rain, lifts up the birdsong afterwards.

Take heart. You have become immune to describable form, but your having resided here will be held within the forever of this field.