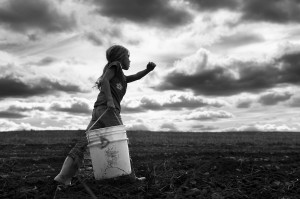 Photographer Lottie Hedley believes that beauty, inspiration, conflict, determination, and intrigue all exist in our own backyards and deserve our attention. Her drive is to tell local stories which are often overlooked because of their proximity.

Rural Harvest is a series of stark and gripping black and white photographs, full of contrast and mood. They document the life and work of the Gerritsen family: Jim and Megan and their four children, Peter, Caleb, Sarah and Amy. The Gerritsens organically farm potatoes and other vegetables for seed on Wood Prairie Farm in Bridgewater, Maine.

Says Hedley: “The work is about stewardship and the vulnerability of family farming. In making the work, I was very lucky to spend time with Jim and Megan Gerritsen and their lovely and very hard working family in Aroostook County. This work is the beginning of what will be an ongoing series looking at the institution of the family farm: the vulnerability of the family farm, the next generation of farmers, the disappearance of the multi-generational farms, and new initiatives to keep family farming alive.” The town of Bridgewater has felt the disappearance of family farming. Fifty years ago on the Gerritsen’s four mile stretch of road there were thirty potato farms. Twenty years later the entire town had only thirty farms, and five years ago there were only six potato farmers left in town.

Through farming organically, the Gerritsens strive towards a sustainable food system.  When asked to envisage the goals of such a system for Maine, Jim and Megan said their goal is to help create “a future of hope, expectation and permanence so that the next generation.” Hedley’s photographs will be accompanied by several poems written by Maine poet Bob MacLaughlin, specifically for this show. Both the photographer and poet will be present at the exhibit’s opening reception on Wednesday April 4th, from 4:30-7pm. The reception will include a reading by the poet.

Lottie Hedley attended the Maine Media College in Rockport, ME where she completed the year-long certificate program and was awarded the Paul Caponigro Scholarship. During her time at the Maine Media College, she focused on issues related to the vulnerability of the family farm, allowing her to pull on the muddy boots of her childhood growing up on a dairy farm in Wairarapa, New Zealand. Following graduation from the Maine Media College, Hedley spent the 2011 summer at the Maine Media Workshops as a teaching assistant for photographers and reporters, including Sam Abell, Sue Bloom, Nancy Donaldson, Ron Haviv, Sarah Kramer, Bob Krist and David H. Wells. Hedley was selected as one of a hundred students who attended the 24th Eddie Adams Workshop in upstate New York during the fall of 201. She was also selected to attend the 2011 portfolio review at Atlanta Celebrates Photography. In addition to photographing editorial assignments for Down East Magazine, Savannah Magazine and Skirt, Hedley also shoots commercially and as the still photographer on film sets.

Bob MacLaughlin spends a lot of time getting happily dirty in his own vegetable garden at home in Warren, and also in the fields and greenhouses of Hatchet Cove Farm, a thriving CSA just up the road. Bob has been a newspaper and magazine reporter and editor, as well as a copywriter for TV and radio. His current focus is on poetry, and his book FAULTY WIRING: the Alzheimer’s poems and other memories was published last year by Moon Pie Press. His topics include not only the difficulties and humor inherent in his father’s adventure with dementia, but also glimpses into a wide variety of human experiences. Says Bob: “I am thrilled and honored by the invitation to provide verbal companions to the stunning photos of Lottie Hedley’s Rural Harvest.”

Case Study: Veggies For All