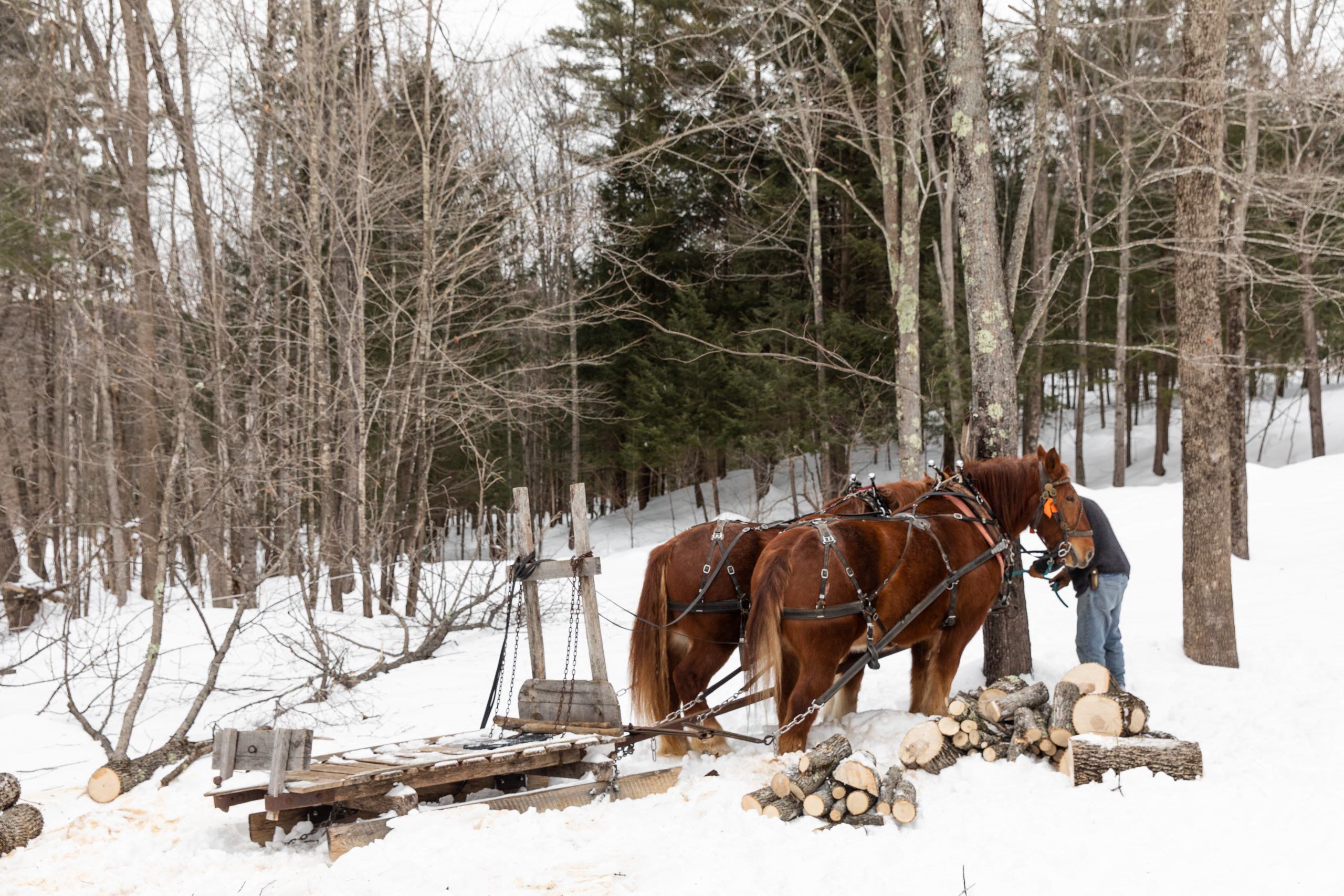 On a clear October morning, I walk with Peter Hagerty down a dirt road on his 100-acre farm in Porterfield, Maine. We make our way past an old barn and a garden, then meander uphill into the dappled light of a forest. That’s when Hagerty starts divulging his favorite facts about the woods. “This is not just a bunch of trees with a bunch of individual roots,” he says with a warm smile. “These roots are all interconnected with one another.”

I try to imagine roots of different species intermingling underground through fungal networks while I take in the stunning oranges and yellows of birch and beech foliage around us. But what may have felt like an ideal fall day is sullied by unseasonable warmth—instead of feeling a refreshing bite in the air, the humid, 80-de­grees-Fahrenheit weather leaves us hot and sweaty.

Hagerty and his wife, Marty Tracy, have been harvesting trees from this forest every year since 1976. Over time, Hagerty’s approach to harvesting has shifted, in part because of his mounting concerns about the warming climate. He has always been interested in sustainably harvesting wood, which is why he chooses to harvest with draft horses rather than with heavy machinery (which can compact soil and damage roots more than the trot of a horse). But his harvesting attitudes took a more serious turn after he read the book The Hidden Life of Trees by German forester Peter Wohlleben in 2016. “All of a sudden a light went on,” Hagerty says. What most intrigued him was learning the extent to which trees can slow the rate of climate change by sucking carbon dioxide out of the atmosphere and storing it in roots and trunks. “We have these huge allies,” he says, “but we don’t even realize that we have them.”

All of a sudden a light went on. We have these huge allies [trees], but we don’t even realize that we have them.”

With 89 percent of Maine covered in woodland, the state ranks as the most forested in the country and does, indeed, hold great potential in its trees. (New Hampshire comes in second place with 81 percent forested.) Aside from storing carbon, healthy wood­lots also help filter drinking water and keep animal communities intact. And while the very best thing for the environment may be to leave all of these forests untouched, Hagerty knows that’s not realistic. That’s why he and others across the state are working to ed­ucate landowners about “low impact” forestry, a prac­tice that leaves trees in the ground longer to absorb more carbon, all the while growing in diameter and gaining in value. They ultimately hope to improve quality of life and local business by keeping more forests intact, and getting locally produced, high-val­ue wood products in the hands of more Mainers.

Trees have deep roots in Maine culture. As longtime maple syrup producers, Ed and Pat Jillson understand this intimately. They’ve operated Jillson’s Farm and Sugarhouse in Sabattus for more than 40 years, and each spring, they welcome droves of school groups to their farm so that children can learn about (and taste) Maine’s sweet heritage of tree tapping. When they first opened their doors for Maine Maple Sunday decades ago—an annual springtime tradition when sugarhouses across the state offer tours and community feasts—they were surprised when more than 2,000 people showed up. “From then on, we couldn’t make enough syrup,” Ed says.

Syrup, along with apples and other fruits, have a solid place in Maine’s history of agriculture. But, these days, if trees aren’t yielding these types of treats, they’re often viewed as the backdrop of work­ing farms. Hagerty wants to change that mindset.

“A farm is not just a field,” he says. “A farm is a forest and a field.” He notes that, in his grandfa­ther’s generation, forests received more recogni­tion as an integral part of a farm. “Woodland was the winter garden,” that paid for taxes and kept farmers afloat between growing seasons, he says.

To help landowners sustainably realize the full potential of their land, Hagerty has been involved in the Low Impact Forestry Project of the Maine Organic Farmers and Growers Association (MOFGA) since it was founded 20 years ago. But when this group first launched, they weren’t focused on the climate benefits of forests. “We had no knowledge of how important those trees were to the long-term survival of the environment,” he says.

That’s in part because scientists didn’t understood the extent to which trees can regulate the climate until fairly recently, says Jonathan Thompson, an ecologist at the Harvard Forest in Petersham, Massachusetts. Scientists have long known that trees suck carbon dioxide out of the atmosphere and store it in their roots and trunks during photosynthesis. But new findings show that forests in the eastern U.S. absorb an astounding 15 to 20 percent of carbon pol­lution associated with fossil fuel burning each year. And that quantity just keeps increasing over time: As forests age, they suck increasingly more carbon out of the atmosphere. “That’s really news, that wasn’t what we thought would happen,” says Johnson, noting that scientists previously thought trees plateaued in their carbon consumption after about 100 years. This means older forests have always been helpful allies in slowing climate change, but scientists haven’t fully appreciated this fact until recently.

The most responsible type of tree harvest would be to leave trees in the ground for as long as possible, Johnson says. But that doesn’t mean a landowner should never thin their woodlot—even waiting an extra five or ten years to thin a stand can offer great benefits to the environment, and to the quality of the wood. “Forestry is really a patient person’s game,” he says. “You need to think generations ahead.”

Tracy Moskovitz and Bambi Jones practice this patience at Hidden Valley Nature Center in Whitefield. While their return-on-investment is more drawn out than it might be for a traditional industrial logger, this decision could pay off in the long run, says Jones. “We are constantly improving the woodlot, so the value of the wood is constantly going up, and it is going up faster than most because of our practices,” she adds.

Like Hagerty, this duo didn’t set out with the intent of managing their trees for carbon when they first started logging their 1,000-acre farm about 40 years ago. But they have become more attuned to these climate benefits over the years.

As Moskovitz tours me around their land, he points out various things they do to improve the health of the forest. For example, they only harvest when the ground is solid (preferably frozen) so as not to compact the soil around roots—which can damage or kill organisms living in the soil that also help store carbon dioxide out of the atmosphere. They keep an eye out for branches that need pruning to allow sun­light to reach saplings growing on the forest floor. And they harvest from within a 15-acre area each year, only returning to a given plot after ten years. “In gardens, you think of value during harvest time,” he says. “But we think of standing timber as our greatest asset.”

For that reason, he leaves the healthiest of his trees standing, and weeds out others that aren’t as healthy, trees that are thwarting growth of surrounding trees by blocking sunlight or consuming soil nutrients. “Conventional foresters take the best and leave the rest, but we do exactly the opposite,” he says.

Conventional foresters take the best and leave the rest, but we do exactly the opposite.”

Moskovitz and Jones have also built numerous cul­verts and bridges around their property to reduce the impact of their trucks on soil and streambeds; leave some fallen trees for woodpeckers and other creatures to scavenge; and, when school groups visit, build shel­ter piles for animals using discarded crowns of trees.

For all of these efforts, the couple has won nu­merous awards including the 2014 State of Maine’s Outstanding Tree Farm from the Maine Tree Farm Program. “What makes Hidden Valley unique is that they are taking a long view of what they are doing in every respect,” says Morten Moesswilde, a state forester who works out of the Maine Forest Service’s Jefferson office. Moesswilde hopes these types of practices can become the norm rather than the exception in Maine, and he spends his days working with landowners to educate them about the benefits of these types of low impact forestry practices.

“The trick,” he says, “is getting everyone on the same page.” With increased outreach and public awareness, Moesswilde hopes to elevate an attitude toward locally harvested wood comparable to the rise of the local food movement. “Everything about localism is positive, the tricky part is making those connections for people,” he says. “Everybody eats, but not everybody is paying attention to where wood comes from.”

Theresa Kerchner, executive director of the Kennebec Land Trust, is now working to address this issue by creating a user-friendly tool for Mainers to easily source their wood locally. She launched Local Wood WORKS in 2013, an initiative that connects consumers with local wood providers throughout the northeast through an easy-to-use digital database of products ranging from flooring panels to furniture building materials.

Kerchner is now networking with architects and engineers to spread the word and get this new tool on the radar of more Mainers. She hopes the efforts will help communities return more deeply to their roots in the lumber industry, but this time with a mind towards sustainably harvesting wood for the long-term benefits of our climate.

Generations ago, Kerchner notes, small mills scattered throughout Maine towns manufactured products ranging from tool handles, to flooring and beams. That shifted when industrial logging became larger-scale. “My vision is we could bring back some of those small economies in our communities,” she says. “And at the same time, because wood-based economies would be dependent on forests, we get the benefits of keeping forests as forests.”

By keeping forests as forests longer, she hopes to drive up the market value of wood. “I want to find ways for landowners who own forestland and need to derive an income from it to make an income from it,” she says. 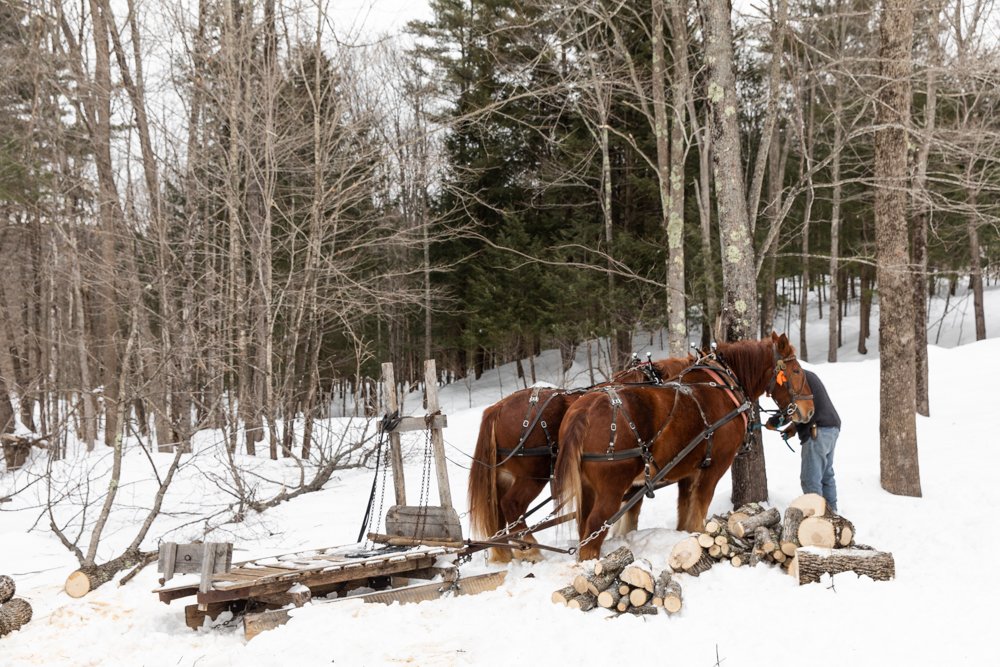 Meanwhile, Hagerty has woven carbon storage into his Low Impact Forestry curriculum through MOFGA so that landowners can understand how their thinning practices can help improve the environment. Last fall, a local high school teacher reached out to him to see if she could bring her class to his farm to learn about carbon storage in trees. “These little things are happening now,” he says.

His enthusiasm for the forest is palpable, and it’s hard not to feed off this energy as he tours me around his woodlot. “If you were to look under­ground,” he continues as we walk through the forest, “you would see this giant map of interconnected organisms that are all working to keep the woodlot in its entirety healthy.”

“There’s more going on than I had ever dreamed,” he adds with genuine awe.

In this way, trees offer Mainers more than just monetary value and ecosystem functions: they provide a source of inspiration and a sense of home.

“The key for all of us,” Kerchner says, “is they provide a sense of beauty and place for our region.”

Laura Poppick is a freelance environmental journalist based in Portland, Maine who’s favorite garden snacks are strawberries and sugar snap peas. She contributes to Scientific American, Audubon Magazine, and elsewhere.