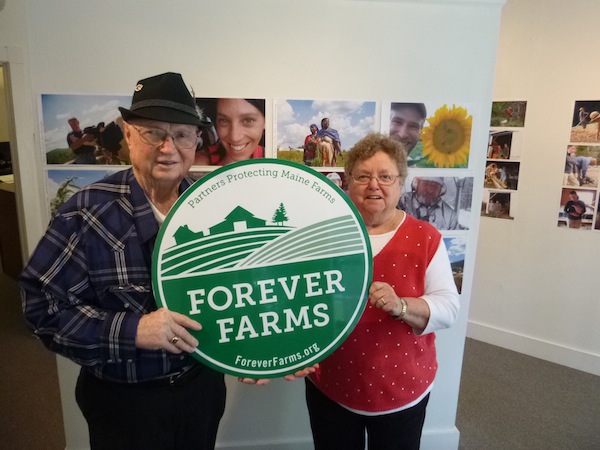 Bruce and Rosemary Ballard bought Ballard Farm in St. Albans/Palmyra 1964, and on January 29, 2015 the couple closed on an easement that will ensure their 372 acres are protected as farmland forever.

For 21 years, the Ballards ran a dairy farm on the property. These days, Bruce raises replacement calves, and sells beef, hay, sweet corn, and eggs. The hay is sold as far as Downeast, but the other products are sold locally, advertised through word-of-mouth.

Bruce first learned about farmland protection from one of MFT’s board members, and started reading more about the history and methods of farmland conservation. “New Jersey got the ball rolling,” he said, to which Nina, MFT’s staff member in charge of the Ballard Farm project, chimed in: “States like that were almost overwhelmed with development pressure—they needed to do something, and now we have those tools too.”

Bruce gave the idea some thought, and more thought, and finally concluded that protecting his farm “felt like the right thing to do.”

The Ballard’s three children all grew up on the farm. One son takes his work vacation each summer to help with hay season because he loves it so much. Their daughter Stephanie has always wanted to be a farmer, and has worked on the farm full-time for the past 8 years, undeterred even by a tractor accident several years ago.

By putting an easement on their land, Bruce and Rosemary will be able to pass the farm on to the next generation without going into debt. Without the easement, Bruce is sure that the land would have been chopped up into house lots.

Now, the land can stay in the family and in agriculture, carrying on the farm legacy started by the Ballards half a century ago.