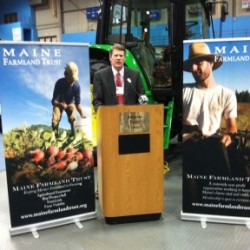 By John Piotti, Special to the BDN

After decades of decline, farming in Maine is growing and poised to blossom. From 2002 to 2012, the number of farms in Maine grew by 13.5 percent. From just 2007 to 2012, the value of Maine’s agricultural production increased by 24 percent. Maine could become the food basket of New England, given its abundant land, plentiful water, handy access to good markets and great farmers — including many beginning farmers who want to farm here.

But those fundamentals alone are not enough for agriculture in Maine to thrive. It has been innovation that has enabled farming here to grow over the last decade, and it will be innovation that determines if farming in Maine will realize its full promise.

Many people equate innovation with technology — and, without a doubt, computers and other forms of high-tech have helped advance farming here. But much of what has positioned farming for the future is clearly low-tech (or even no-tech), though still highly creative. And some of what has worked in Maine has involved going back to old ways of growing and marketing food — albeit with a new twist that is also truly innovative.

It’s hard to summarize what’s happened to farming in Maine in the past 15 years, because the full story is multifaceted and nuanced. But one part of that story is that Maine has seen rapid growth in smaller diversified farms that raise products for sale locally. Farmers have developed entirely new ways of selling, often operating outside established food-distribution channels. The new delivery systems include on-farm stores, direct sales to restaurants and the CSA model (community-supported agriculture, where consumers pay preseason to receive a share of the farm’s bounty).

Maine farmers also have developed many new products — both valued-added products made from farm inputs (such as jams, pies, breads, teas, cured meats and wines) and a wide range of associated products that come from the farm (including compost, methane-generated electricity, corn mazes, day camps and farm vacations).

Maine led the nation in marketing milk that is free of bovine growth hormones. And today, Maine is on the cutting edge of artisan cheese, with over 70 cheesemakers (second only to New York). Maine boasts Johnny’s Selected Seeds and Fedco Seeds, two companies known internationally for their research-driven product innovation.

Another set of key innovations involves how farmers grow products. As a leader in the organic movement, Maine can claim credit for refining organic production techniques and training farmers. (The Maine Organic Farmers and Gardeners Association’s apprenticeship program has had an impact well beyond Maine.)

Meanwhile, many Maine farmers have adopted the four-season farming techniques pioneered by Maine’s own Eliot Coleman, which allow for 11-month vegetable production in unheated hoop houses.

Innovation can even come in the form of public policy. In 2004, the Legislature enacted a highly creative and complex policy initiative that bolstered Maine’s dairy farms during a period when dairies everywhere were struggling. As evidence of the policy’s success, Vermont from 2004 to 2011 lost more than half its dairy farms, while Maine lost only 19 percent.

Yes, Maine agriculture has seen a lot of innovation. But it’s nothing compared with the period of exploration and experimentation that we are now entering.

Even though farming in Maine has been growing overall, the growth has not been uniform. Dairy farms have been in decline, and many other farms that sell their products as commodities to processors (such as potato farms) have been stagnant. Growth has been primarily among smaller farms selling direct. Yet the future does not lie with just these smaller farms.

Commodity production remains the majority of Maine’s farm output and is essential to maintaining infrastructure on which smaller farms depend. The future of farming in Maine will likely involve a diverse array of farms operating at various scales. The only way Maine will be in a position to feed itself, let alone help feed New England, is if some smaller farms scale-up.

To put it another way, CSAs have been a wonderful innovation that has allowed farming to grow — and I have no doubt that CSAs and other forms of direct marketing will continue to grow in number and impact — but the majority of Maine consumers are never going to get their food from CSAs, or farmers markets or farm stands.

Rather, they will get their food from supermarkets and institutions like schools, workplace cafeterias and nursing homes. The goal is to get more Maine food into these mainstream channels and to do so in ways that work for both farmers and consumers.

To this end, many farmers who have been successful selling direct are now seeing the need to sell wholesale as well — a transition that will require a new set of innovations. Many intend to participate in new ventures that pool products from multiple farms. These so-called food hubs, some of which include processing, re-create some of the community-scale infrastructure that once existed throughout Maine, back when small canneries, creameries and slaughter houses were common.

In a sense, every distributor or processor operating within the global food system could be viewed as a food hub. But as the term is generally used, it refers to operations that are specifically designed in service to local farms and that create new options for consumers.

A long-established example is Crown O’ Maine Organic Cooperative, which is the state’s primary organic distributor. An innovator on many levels, two years ago Crown O’ Maine launched a new venture, Northern Girl, which is now processing Maine vegetables for institutions and stores from a facility in Aroostook County.

In Skowhegan, the Somerset Grist Mill provides infrastructure that farmers need if they are to grow more grain in Maine. In Unity, Farmland Trust is partnering with two dozen small vegetable farms to create an aggregation and storage facility, to open in early 2015, that will enable these farms to reach markets together that they could never enter on their own.

The examples go on and on — in Topsham, Eastport, Wales, South Portland and elsewhere. A growing number of entrepreneurs and entrepreneurial organizations are creating new infrastructure to support a robust local food economy.

But the current wave of innovation goes beyond infrastructure, to innovative forms of investment that also create new opportunities for farming. First, there are the investment funds for local food businesses available through Slow Money Maine. This enthusiastic network, which meets every other month in Augusta, has infused more than $8 million of patient capital into this sector.

Second, there are the innovative ways that farmland is being made affordable for incoming farmers — which is critical, given that the ownership of one-third of Maine’s farmland will be in transition this decade.

Maine Farmland Trust has pioneered multiple programs that both protect vulnerable farmland and get new farmers on the land. I’ll mention one we call “Buy/Protect/Sell.” Through this initiative, which is supported by both foundations and private investors, the trust has enabled 37 new farmers to buy farms at affordable prices. Each property will remain farmland forever — and when it sells again, it will pass hands at its farm value, as opposed to its development value.

Maine farms could once again feed our state. But just because this could happen doesn’t mean that it will happen. The future of farming in Maine hinges on what we do now. We are in a period of experimentation and innovation — which is exactly where we need to be.

John Piotti is president and CEO of Maine Farmland Trust. He previously served in the Maine Legislature, where hechaired the Agriculture Committee. Nationally, he has been chair of the Northeast Sustainable Agriculture Working Group and a director of the National Campaign for Sustainable Agriculture. This column first appeared in Maine Policy Review, published by the University of Maine’s Margaret Chase Smith Policy Center, and can be found at digitalcommons.library.umaine.edu/mpr.

To survive and grow, Maine farmers must keep innovating

On September 29th, MFT closed on a purchased easement on the McLaughlin Farm in Wilton.…