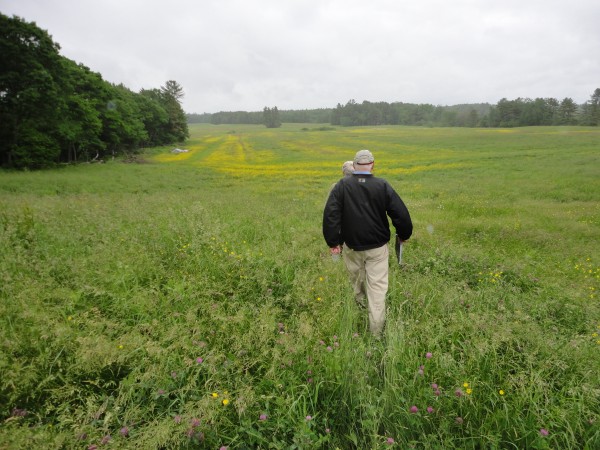 KENNEBUNK, Maine — Maine Farmland Trust officials first approached Tom Chappell about lending some name recognition to their land protection campaign. They got much more than that.

They got 154 acres more, to be exact. Chappell, best known as the “Tom” of the environmentally friendly soap and toothpaste maker Tom’s of Maine, was so intrigued by the trust’s goals that he donated agricultural easements protecting farmland over two Kennebunk properties he owns with his wife, Kate.

Chappell’s latest venture is Rambler’s Way, a producer of environmentally friendly clothing made from the superfine wool of Rambouillet sheep. He uses the two newly protected farm properties, which include more than a mile of Kennebunk River frontage, for the sheep and hay harvesting.

And he agreed to serve as the campaign’s honorary chairman as well, giving the effort much needed notoriety during what Maine Farmland Trust Executive Director John Piotti called a potentially dangerous period of transition for agriculture in the state.

“Having Tom as an honorary chair makes a huge difference,” Piotti told the Bangor Daily News on Tuesday. “We’re well known in the agricultural community, but we’re still a relatively new arrival in the broader public psyche. A lot of people don’t know who we are. … We like the connotation of a respected business leader saying, ‘These guys have a good business model.’”

The organization aims to place agricultural easements on 100,000 acres of farmland by the end of 2014, legally protecting the land for farming against the threat of being subdivided for housing or other forms of development.

The 100,000-acre goal is ambitious considering the trust has covered about 26,000 acres over the 12-year-old group’s existence thus far, but Piotti said it’s necessary to be aggressive because of the increasing uncertainty facing farmers over the next several years.

Piotti reiterated the oft-cited statistic that about 400,000 acres — or about a third — of Maine’s best farmland is due to change hands over the next five or 10 years as older farmers retire.

While the generational transfers account for one pressure point in the pursuit of farmland protection, Piotti noted that the staggering economy promises to complicate the next half decade even further. Adding to the number of farmers leaving the business because of old age, he said, will be others forced out by poor markets or the sale of the land from underneath them. Those factors threaten to place even more farmland on the market, where it can be snatched up and subdivided.

“A lot of the land in Maine being used by farmers isn’t owned by the farmers. It’s leased,” he added.

Maine Farmland Trust has picked up momentum as the economy has faltered, climbing from a membership of about 400 to about 3,500 households over the past five years, Piotti said.

The trust last month announced the purchase and proposed resale of 1,300 acres from Bradford farmer Adrian Pray, as well as 300 acres in Saco and Buxton settled as a farm more than 200 years ago by the ancestors of owner Roland Fogg. Piotti added that the organization will be announcing protection of another 2,000-plus acres in Dover-Foxcroft in the near future.

Maine Farmland Trust purchases properties or easements using funding from the state-based Land For Maine’s Future program as well as the federal Farm and Ranch Lands Protection Program, but Piotti said the cost to protect 100,000 acres is about $50 million. As a result, the group’s campaign features a significant fundraising component in addition to its pursuit of land donations like the ones made by Tom and Kate Chappell.

In a Maine Farmland Trust announcement of the Chappells’ donation, the organization states that 100,000 acres used for agriculture will generate $50 million in annual economic benefit, making the campaign “a smart investment.”

CIFF screening of Reviving the Freedom Mill at the Strand Theater in Rockland, Sunday, September…