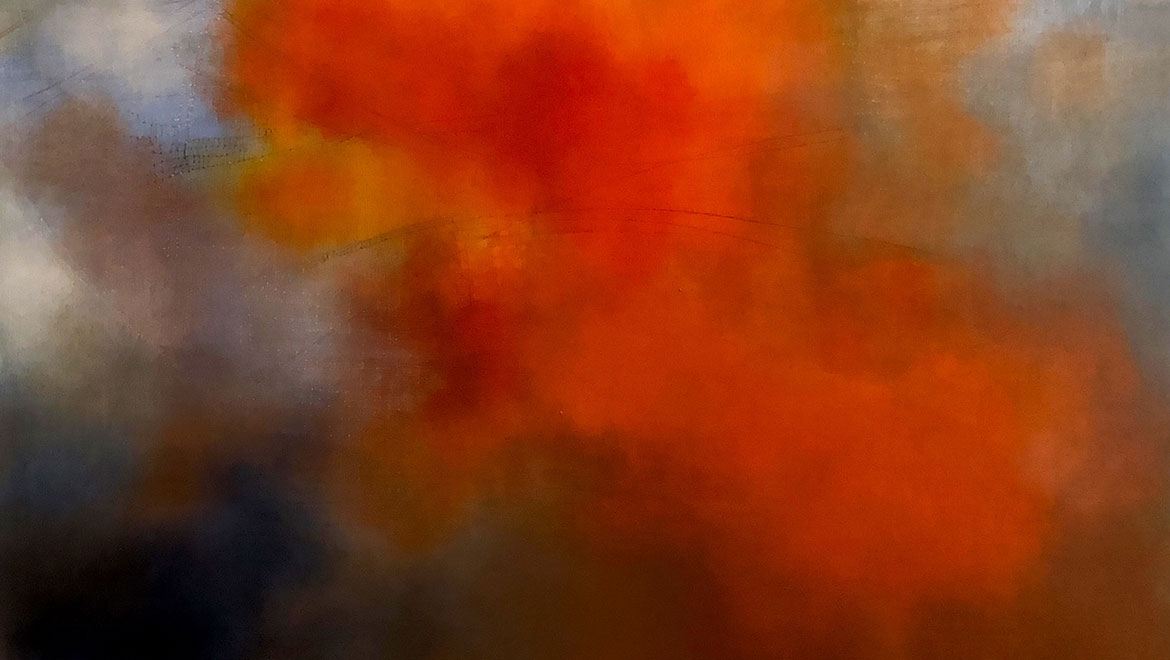 During the summer of 2018 six visual artists, one writer, one performance artist and one gardener lived and worked together at Rolling Acres Farm in Jefferson, Maine. All had been selected for the MFT’s Fiore Art Center residency program, because of the common thread running through their work: a meaningful engagement with themes related to agriculture or the environment.

The solitude, natural setting and communal aspect of the residency allowed the artists to focus, explore and create in new ways. The exhibit of the work produced during their residency is a fabulous exploration of color, atmosphere, and connection to the natural environment. The 2018 Fiore Residents Exhibit opened March 18 and will be on display until May 24th. It concludes with artist talks at 5pm and a closing reception from 5:30-8pm at the MFT Gallery in Belfast.

Performance artist Heather Lyon woke many mornings at dawn to walk through dew-covered fields down to the lake. Working in and with the water, she ultimately crafted several performative videos. MFT Gallery displays her “Safety Poncho (Orange)” video. With its hushed silvery greys and bright red-oranges, the video engages in a riveting dialogue of water and fire with Michel Droge’s vibrant, atmospheric oil paintings: “Yesterday’s Fires” and “Pleiades Showers.” Through her interactions with the land and observation of constellations above the farm, Droge explored patterns in the micro and macro relationships of life in her watercolor and graphite drawing of “Queen Anne’s Last Wishes.”

Maxwell Nolin took advantage of the uninterrupted time in the studio to work on two large, luminous oil paintings, “Self-Portrait, 2018” and “Tea,” which enabled him to slow down and reflect on the conceptual aspects of his work, as well as explore different experimental techniques with his process.

In addition to working on her narrative manuscript, writer-in-residence Jodi Paloni produced a beautiful lyrical writing called “Rain Begins the Day,” which captures the essence of the farm landscape and the connection felt by all who were taken in and nurtured by it.

Clif Travers spent time exploring the natural environment of the field and woods and connecting with the community at the farm. In the studio, he constructed an 8 x 6 foot sculptural panel using discarded lumber and other wood products, in an attempt to honor and reconstruct the beauty of trees. Travers then painted the three-dimensional panel in a style referencing church mosaics and stained-glass windows. He contributed a print of the stunning “I Dream of Trees” for this exhibit.

During her residency, Stephanie Mercedes continued building archives of missing violent histories and created a variation of her “Relicarios” installation. Mercedes’ work honors the grandmothers who protested the disappearance of their children by wearing lockets. Her work on display includes research on those that escaped political persecution in Argentina and relocated to Maine, drawings, and a lighted locket.

Thu Kim Vu, from Vietnam, was inspired by the personal bonds formed during the residency through the communal kitchen, food, and the garden. She created a wonderful series of miniature paper drawings of pots, pans, and utensils glued on several overlapping sheets of Plexiglas that are designed to be viewed through the natural light of a window.

In addition to growing unusual vegetables and ornamental food for the residents, the resident gardener Rachel Alexandrou created a video installation called “The Nature of Stewardship”. This was inspired by her work in the garden and kitchen and explores the relationship between human, body and earth.