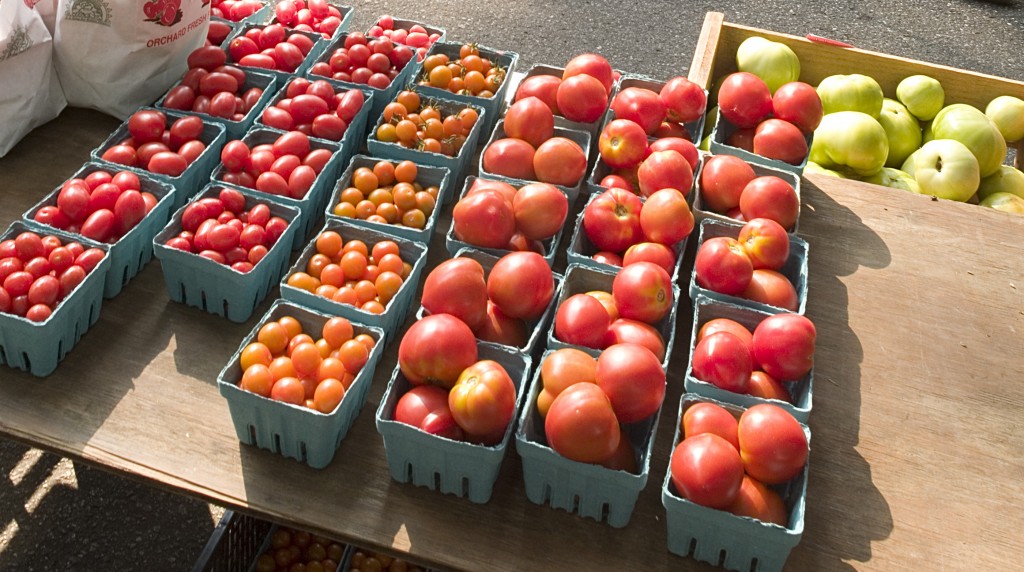 Earlier this month, while Susan and Anna were in Germany, I traveled to Atlanta to present at a conference. I had no choice but to leave John behind at home to fend for himself.

I was booked on a flight leaving Portland at 5:50 a.m., which meant that I either needed to leave home at 3 a.m. or spend the night in Portland. But an overnight really wasn’t an option, because I couldn’t be away from home one minute more than needed. (If you have an 18-year-old son, you know why.) So I set the alarm for 2:30 a.m. and made it work.

The conference was sponsored by Wholesome Wave, a national organization that works to make healthful food more accessible and affordable. The organization I run, Maine Farmland Trust, has been partnering with Wholesome Wave for several years. They helped us with an experimental project, through which we sold fresh food from local farms to low-income Mainers at half of what we paid the farmers.

The idea behind Maine’s project, which we called Community Farm Share, was that we could simultaneously serve the needs of a food insecure population and support local farmers. Wholesome Wave helped us test and measure key assumptions, such as our belief that we could get people to begin to cook and eat more fresh whole produce if we offered the right incentives.

Wholesome Wave did the same thing with several other organizations around the nation that were experimenting with similar efforts. Spurred by the powerful results that were documented in Maine and elsewhere, the federal Farm Bill of 2014 included a major new initiative, called “Food Insecurity Nutrition Incentives” or “FINI.” During the next five years, this new federal program will provide over $100 million in funding through which SNAP benefits (formerly food stamps) will go twice as far if spent on fruits and vegetables.

In a period when Congress can’t seem to agree on anything, you may wonder how the 2014 Farm Bill included this significant new program. I’d like to think the primary reason is that the program makes sense. Results from Maine and beyond show that consumers who buy more fruits and vegetables begin to eat and live better. But I’m not so naïve. I know there’s another reason this program passed Congress.

There is a contingent in Congress that thinks SNAP benefits should not apply to various food items which they consider “unhealthy.” There’s a certain logic to this perspective. And yet, when you get into the details, it’s hard to decide which foods should be included and which shouldn’t. It’s highly subjective. Sugary soda may seem an easy choice for some, but not everyone. And what about prepared foods full of fat and salt? What about red meat? Even within my own family, we have widely differing views on what’s good for you. For example, Susan thinks organ meat is horrible, while I view it as health food.

But the bigger question is this: Who is government to decide what someone should eat? Our government provides billions in various tax breaks and subsidies to businesses without specifying how those taxpayer dollars should be spent. Why should we treat SNAP benefits so differently?

Without taking a side in this argument, let me say that Congress is at odds on it as well. There is not even a clear partisan divide. At present, it appears an intractable problem.

And when that is the case, the best strategy is often to approach the problem in a completely different way. That is what FINI does.

Rather than dictate SNAP benefits can’t be spent on certain food products, FINI encourages — through incentive funding — SNAP recipients to purchase those products that most people feel are most beneficial, namely, fruits and vegetables. It’s a classic Congressional compromise.

In this case, it’s also a smart thing to do, because all the research shows that these kinds of incentives positively change the eating habits of SNAP recipients, while simultaneously supporting fruit and vegetable farmers. It’s a win-win.

Thanks to the efforts of Maine Congresswoman Chellie Pingree, among others, the FINI program at present prefers that SNAP benefits be applied to the purchase of fruits and vegetables from local farms. That makes good sense. It keeps the money in the local community, which has been demonstrated to provide more economic value, while simultaneously boosting local farmers. Let’s hope that, as this program matures and evolves, this focus on local farms will remain.

Mainers can feel good about the role our state has played in creating this new federal program — and the role we are now playing in implementing it.

Initial implementation is occurring across the nation through just 15 federally funded pilot projects. Two of them involve Maine, and in one, Maine is in the lead. Maine Farmland Trust has been awarded a $250,000 grant to implement use of incentives at small retailers like the Belfast Coop. The trust has to match this $250,000 grant with private funding; we have secured generous donations from both foundations and individuals, but still have over $100,000 to raise.

As I awaited my turn to speak at the conference of more than 300 people eager to hear about what Maine has done, I reflected on what it takes to make something happen.

After all, this whole program is about incentives, so it’s natural to think about what motivates people.

I thought about what moved Congress to create this program in the first place, and then to give preference to local farms. I thought about what encouraged the many people who have donated funds to Maine Farmland Trust to help see the program implemented. And I thought about what motivated me to take two full days out of a hectic schedule — and lose a night’s sleep — to come to a conference where I’m given just a few minutes to tell Maine’s story.

All these reflections led me to the same place: a recognition of the power of people, be it the visionary staff at Wholesome Wave who coordinated this complex experiment, or the highly motivated members of my staff who ran Community Farm Share, or Rep. Pingree and her colleagues who advocate for local farms at every turn, or all those folks who give so generously to so many good causes.

As for me, how could I not come to Atlanta? I clearly needed to support the members of my staff who were also there, the ones who are working so hard to implement this program. And I knew I would learn a lot from the broader conference, and that what I learned would help me do my job better. Yes, it will all be worth it, provided of course, that our house is still standing when I return.

Our house was not only still standing, but clean. It had snowed, and John had cleared the driveway. Inside, there were no dishes in the sink, none of his stuff strewn about the floor. He’s in the middle of his own big project, constructing a new robot, but all the pieces and tools were consolidated in one spot in front of the wood stove. The house looked better than when I’m there by myself.

My son had clearly risen to the occasion. My next task is to reflect on what motivated him — so I can use similar incentives in the future.