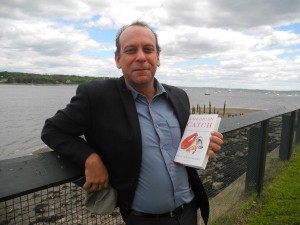 Just ask Monique Coombs of Orrs Island, a writer and lobsterman’s wife who sees red about the three-color guide to seafood choices that’s long been put out by the Monterey Bay Aquarium. In the guide, Maine lobsters are tagged with a “yellow” label, as something that’s a good alternative, but not a best choice, because of the possible effects on the right whale. Yet some species of shrimp, farmed in Southeast Asia under murky conditions that recent news reports say include slavery, are given a “green” label — meaning it is a best choice for diners.

“The Gulf of Maine lobster is extremely sustainable,” Coombs said. “Our fishermen work very hard, and I think of my husband and other lobstermen, and how well they treat their sternmen. It’s a slap in the face to be considered yellow.”

That Seafood Watch guide from the aquarium assesses the environmental impact of fisheries and fish farms, and does not incorporate social issues, according to a message posted on its website that encourages people to find more information from the organizations that do. But for Coombs and two nationally known writers who spoke in Belfast on Friday, the issue should not be stratified or simplified.

“Where things are so complicated, how are you trying to break these things down into three colors?” Coombs said.

Paul Greenberg, a New York Times bestselling author whose most recent book is called “American Catch: The Fight For Our Local Seafood,” had words that echoed hers. He told attendees of Belfast’s Maine Fare on Friday that even though the United States is the country that controls the most ocean in the world, it imports more than 75 percent of its seafood.

“It’s crazy, what we are eating,” he said Friday at the Belfast Boathouse, during the keynote talk for the two-day-long event put on by the Maine Farmland Trust. “We send wild-caught salmon to China, frozen. They defrost it, fillet it, freeze it and send it back to us. What kind of system is that?”

He and Barton Seaver, an author and director of the Healthy and Sustainable Food Program at the Harvard School of Public Health, co-presented the address, called “Why We Need To Eat More Local Seafood.”

Seaver, who also is a chef and National Geographic Society Explorer, said that Americans eat only about 15 pounds of seafood a year, most of that the popular species of shrimp, tuna and salmon. He said that the choices people make for dinner have collapsed economies, when desirable species are overfished.

And it doesn’t help when guilt-stricken people, anxious about the food they’re eating, look too far afield for dinner.

“We get so worried, we go the world over for sustainably fished cod,” he said. “We’ve created this system so inherently based on species.”

Both Seaver and Greenberg said that eating locally caught seafood, including species that often go overlooked — like skate— may help decrease some of the pressure on the oceans. It is also critical, they said, to help fishermen and fishing communities, such as the ones that dot the Maine coast. A sharp decline in fish markets means that consumers are used to purchasing packaged and often frozen fish in the grocery store.

“It presents us with a faceless product with no history, no intimacy, to it,” Greenberg said.

But he is hopeful that consumers already interested in locally farmed food, and meeting their farmers, will also want to meet their fishermen — and help to sustain local fishing communities and fisheries.

“Our health and that of our children are wholly dependent on oceans,” he said. “Our oceans are amazingly resilient, if we let them be.”

House Description: The four-bedroom log house was built in 1993. The house lies at the…

It takes all of us