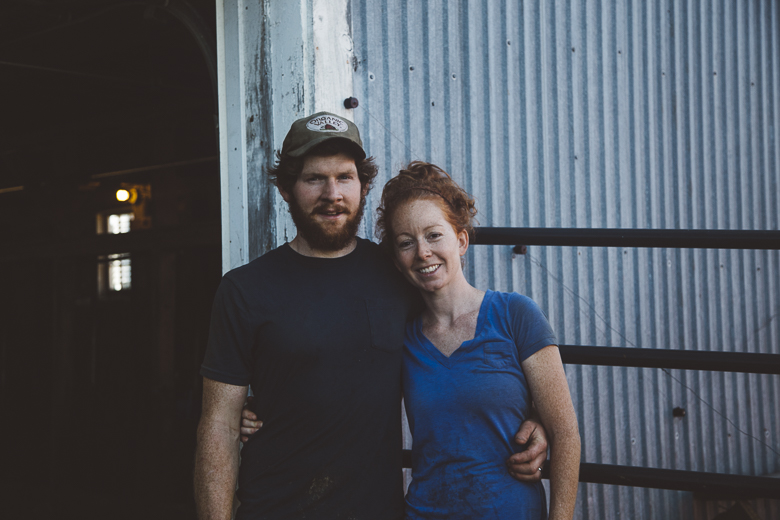 This is another story in our series about young dairy farmers in Maine. In many ways, dairy farms are the cornerstone of Maine’s farming community.  Dairy farmers steward large tracts of farmland for feed and forage, while supporting the feed stores, equipment retailers, and large animal vets that all Maine farms rely upon. Of the 400,000 acres of farmland that will be in transition over the course of the next decade, we anticipate that a large percentage of that land is currently in dairy farming. What will happen to that land, and the infrastructure and communities it supports?

While farming in Maine is growing, Maine’s dairy industry has not seen the same growth. The younger generation who are choosing to be dairy farmers are few and far between, often deterred by low milk prices and high start-up costs. Those who have bucked the trend and have decided to become either first-generation dairy farmers or to continue their family’s farm, have an important role to play in ensuring that dairy farms remain the foundation of Maine’s farming landscape.

Conor and Alexis MacDonald own Bo Lait Farm, an organic dairy farm in Washington. Originally from New Hampshire and Maryland, respectively, the couple met four years ago in North Carolina where Conor was stationed in the Special Forces. Alexis happened to be visiting for a wedding, and the two hit it off. At the time, they had no idea they would one day start a dairy farm together, but now they can’t imagine it any other way.

Conor knew he wanted to do something different when he left the military,  and “farming was always something I was drawn to,” said Conor, who grew up with a family milk cow, and whose relatives still farm in Nova Scotia. While neither Conor nor Alexis grew up on dairy farms, they both “really love cows, and love working with large animals so wanted to start a business doing just that.” Alexis says. “Dairy farming was the best fit for us. So many of our friends and family tell us they never would have thought we’d have become dairy farmers, but it seems to embody so many of the things that are important to us: animals, nature, hard work, community. It can be exhausting and maddening and frustrating at times, but it’s also empowering and rewarding.”

The decision to move to Maine was also a natural choice as well. Here they found “access to affordable land, a growing number of young farmers to network and connect with, vast beauty…” said Conor. They worked with MFT when buying their farm to place an easement on the property, which made the farm more affordable.  They are thrilled to have put down roots at Bo’Lait, which translates to “Cow Milk” and blends their respective ancestries (Bo’ is “cow” in Scottish Gaelic and “lait” is “milk” in French) to create a farm name that is both literal and unique.

While their decision to become dairy farmers was relatively easy, being dairy farmers is anything but. Without a background in dairy farming, their learning curve has been steep, and making it work is a constant challenge. “There’s so much to know when you’re running a farm. You’re a vet, plumber, carpenter, accountant, manager, electrician, mechanic… the list goes on. Most dairy farmers we know still claim to have only learned the tip of the iceberg, even with decades of experience under their belts. It’s no exaggeration to say we learn something new everyday, whether we want to or not.”

Luckily, Conor is no stranger to intense work, and feels uniquely equipped to take on the challenge. He says his experience in the Special Forces set the standard for the type of work ethic and drive necessary to start a farm from the ground up. “The biggest challenge is finding enough hours in the day to get things done,” said Conor. “Also prioritizing work and realizing that the biggest “fires” are the most important to put out first. Managing cash flow is also a big challenge on a dairy because the expenses are very high and the margins are small.”

Conor and Alexis sell their certified organic fluid milk to Organic Valley, a cooperative based in Wisconsin. “We were very lucky in that Organic Valley was looking to add new farms at the time we started, so we were able to sign our contract with them 6 months prior to our first shipment date.”

Right now they’re milking 38 of their 46 cows. “We’ve grown quite a bit over the last year and we think we’ll stay put at this herd size for a while. It feels manageable without being too crazy.” Their milk pool manager at Organic Valley has been a great resource for them as they’ve grown, and a great advocate as well.

The support network they’ve grown around them helps to temper the challenges  running a dairy farm, and the MacDonalds are thankful for the many people that pitch in, in all kinds of ways: “Between our co-op, other local farmers, family, friends and our wonderful, PATIENT neighbors who come over with a smile when the heifers have gotten out again,” said Conor, “I don’t think we could ask for more.”

Together we can do so much! Here's what you helped make possible in 2021.

Wondering what gift to get the Maine farm lover in your life? Hoping to use…