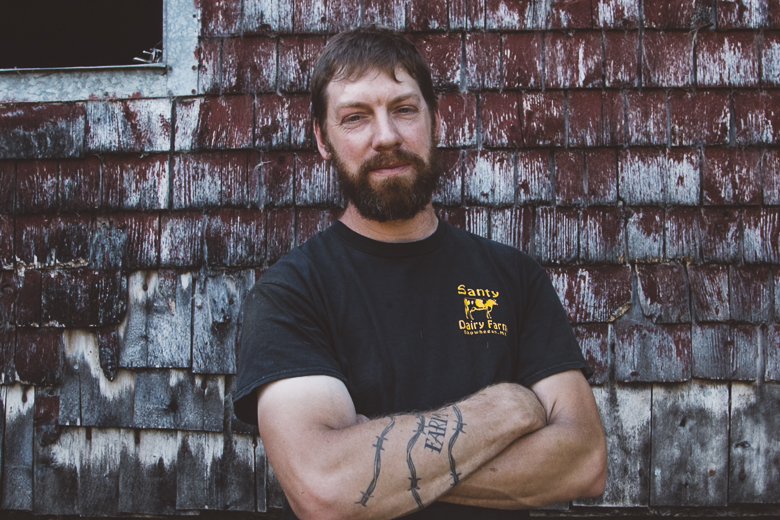 This is the second post in a series about young dairy farmers in Maine. In many ways, dairy farms are the cornerstone of Maine’s farming community.  Dairy farmers steward large tracts of farmland for feed and forage, while supporting the feed stores, equipment retailers, and large animal vets that all Maine farms rely upon. Of the 400,000 acres of farmland that will be in transition over the course of the next decade, we anticipate that a large percentage of that land is currently in dairy farming. What will happen to that land, and the infrastructure and communities it supports?

While farming in Maine is growing, Maine’s dairy industry has not seen the same growth. The younger generation who are choosing to be dairy farmers are few and far between, often deterred by low milk prices and high start-up costs. Those who have bucked the trend and have decided to become either first-generation dairy farmers or to continue their family’s farm, have an important role to play in ensuring that dairy farms remain the foundation of Maine’s farming landscape.

Brad Santy of Santy Dairy Farm in Skowhegan is a second generation dairy farmer. He grew up on his grandparents’ and uncle’s dairy farms in New Hampshire and has always known he wanted to follow in their footsteps. When I asked him why and he said simply, “I love it.” He recognizes the challenges of dairy farming and yet he can’t imagine doing anything else.

Brad attributes the lack of growth in “young” dairy farms to several factors. “It’s tough to start a farm with such huge overhead involved,” he said. “It’s incredibly hard to start small, too, with one tractor and 10 cows.” In his experience, it’s rare that young farmers can jump right in and buy the land, equipment and a herd, without taking on an enormous amount of debt.

Brad and his former wife bought the farm 10 years ago this May. The land had been managed organically for the previous decade, and they decided to maintain certification as a trial run, and ended up keeping it organic. Brad sells fluid milk to Horizon, through Agri-Mark, a Northeast dairy cooperative. He says that while being certified organic is definitely extra work, “it’s more sustainable” and it also helps to ensure a more stable price for his milk, in an industry often characterized by  drastic ups and downs. “Once you’re used to the detailed record keeping, it’s actually really easy,” Brad said matter-of-factly.

One of the reasons Brad and his family decided to move to Maine to start the farm was the relative access to farmland. “We looked at 20 farms all over New Hampshire, Vermont and upstate New York and ended up finding the best and most affordable ones in Maine,” Brad says. It turned out to be the right place for them. The farm has been a great place for his kids to grow up. Brad’s kids Matt and Ally have been around the cows their whole lives. They know their names, help out with milking and other farm work, have seen calves born, and witnessed all of the other realities of farm life.  Ten-year-old Ally is a natural with the cows, said Brad, “she spots things before I do. We had a cow with pinkeye and she found it first.”

The other draw to Maine was the farmer support system –both formal services and informal networks of fellow farmers– that’s in place  here. Dairy farmers don’t often leave the farm; it’s around-the-clock work to take care of the herd. Conveniently, Brad doesn’t have to go far to tap into that support network: in central Maine, there’s a strong community of farmers that can help each other troubleshoot, and share information, equipment, stories, and the occasional beer. His best friend is a conventional dairy farmer up the road, and Brad feels lucky to have found some good employees. One of the two local guys helping him on the farm has been working with Brad for years, and after graduating from college, he returned to the farm full-time.

When he looks ahead to the future of his farm, Brad is hopeful. He feels good about the decision to be an organic dairy farmer, and thinks that will help put the farm in a better position for his kids, who he hopes will want to take over someday. Taking over an established family farm may be a bit easier than starting from scratch, but dairy farming will always be challenging. Equipment is expensive, milk prices go up and down, and access to land for pasture and feed is often a concern. And yet, if you love dairy farming as much as Brad Santy does, the decision to take on those challenges is an easy one.

As Brad’s tattoo reads: “Farm on.”

The Sharing Economy Has Gone Big. Like, Ridge Tiller Big.

Federal Government Activity on Climate Change At the end of June, the House Select Committee…