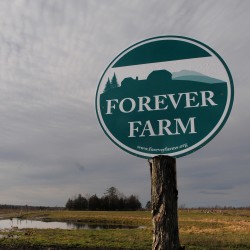 After 47 years running a farming and dairy operation in town, Adrian Pray was ready to retire.But first, he had to find a new owner for some of his 2,300 acres of farmland spread across Bradford, Hudson and Charleston. He didn’t want to see the fields broken into parcels for homes, trailer parks or businesses, he said, but wanted pieces of Maine’s farming industries to continue to thrive on his land. Pray looked to the Maine Farmland Trust, which recently purchased 1,033 acres of Pray’s land with the goal of quickly reselling the property to other farmers.

Click here to watch the “Keep it a Farm Forever” video

“Hopefully, there will be another dairy farmer moving in here,” Pray said Friday while walking around the farm he owned for 47 years. “It’s definitely going to stay a farm, that’s the big thing I like about this deal.”

The Maine Farmland Trust has bought up more than 26,000 acres of farmland since the trust was created in 1999, but has a lot more work ahead of it in the next few years, according to Nina Young, lands project coordinator at the trust. Maine’s farmers are getting older. Of the 1.5 million acres of farmland in the state, 400,000 acres are expected to go through a “generation transfer” this decade, she said. As farms lose their owners and operators to retirement, illness or death, the next owners of the land might not be as interested in keeping the farm going. If Maine loses too many of those 400,000 farming acres, the industry as a whole could be in trouble in the state, which has been called “the breadbasket of the Northeast,” according to Young. That’s where the trust comes in.Maine Farmland Trust buys the land, establishes an agricultural easement stipulating that it only be used for farming purposes, and sells the land at a reduced price to a farmer — often an up-and-coming agriculturist who might not otherwise be able to afford the land. “We’re really concerned that we need to protect that much land and assure that it stays as farm land,” Young said. “There’s not too many people who want to farm anymore,” Pray said, “and it’s hard to break into nowadays.”

Pray said that when he was a child, there were about 40 farms in Bradford alone. Now that he’s retiring, there’s only one farmer left in Bradford, Pray said. Pray, a Bradford native, started working at farms in the area at age 9 for a wage of $1 per day, room and board. As he grew up, he frequently traveled to Aroostook County to work during the potato harvest. “That’s all I wanted to do since I was knee-high to a grasshopper,” Pray said. In 1964, Pray bought a farmhouse, barn and 350 acres of land on Pond Road in Bradford. At the time, the farm’s owner had just 50 dairy cows. Pray boosted the business to its peak in 1996, when the farm boasted 300 dairy cows, mostly Jersey heifers, and 200 more head of cattle. Pray also produced corn, alfalfa and other crops.

Today, the family’s reposed 12-year-old German shepherd mix, a cat, flocks of birds and a single young heifer owned by the farmhouse’s current tenants are the only animals roaming the barns. All the farm’s cows have been sold, many locally, but some to farms as far away as Rhode Island, according to Pray. The last load of milk left the farm in late October. “It seems funny not to see or hear any cattle,” Pray said while walking alongside empty rows of feed troughs and barn stalls. The last few cows left the barn in late-Novemeber. Their hoof prints were still visible Friday.

In retirement, Pray said he hopes to have more free time with his wife, Valerie. “I’m getting there to where she and I would like to do some traveling and not be tied down,” he said. Pray said he hopes Maine Farmland Trust will be interested in purchasing some of his 1,300 remaining acres of farmland scattered across the Bradford area in the next few years.