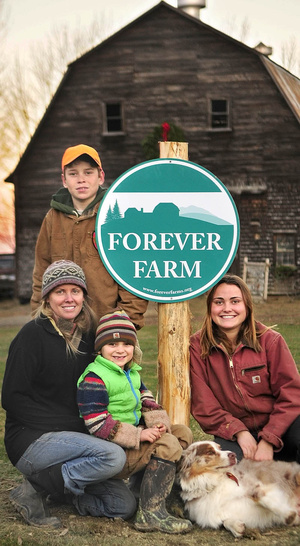 BELGRADE — Winterberry Farm on Route 27, with pastures and vegetable fields that stretch back to Great Pond, has been around 1870.

But there’s a new addition representing a change that will keep it a farm: a green and white sign that reads “Forever Farm.”

An agricultural easement was placed on the property last week by Maine Farmland Trust and the Belgrade Regional Conservation Alliance, protecting it from ever becoming anything else.

“It’s an amazing feeling to know that I’m now an owner of a farm that will be here for future generations,” said owner Mary Perry.

The trust and the conservation alliance, the local easement holder, donated money and time to create the easement, which restricts the farm from being subdivided or developed into something besides a farm. The alliance raised its portion of the easement cost with the help of community members.

Perry, 47, who bought the farm 12 years ago, has been learning to grow vegetables, raise poultry and livestock, and do whatever else it took to support herself and her three children. The farm was owned by the same family since it was established, but was dormant for 25 years before Perry bought it.

“I knew from the second I pulled into the driveway that this was where I needed to be,” Perry said. “I don’t know if I needed the farm or if the farm needed me more, but we truly did this together.”

The farm has 50 members in its community supported agriculture program and is certified organic by the Maine Organic Farmers and Gardeners Association.

Kenya said she does a bit of everything, including training the apprentices who arrive through MOFGA each summer. Perry said Gil works his steers each morning, bringing wood from the forest and Sage helps out around the farm too, sometimes riding around on her pony, Lady Bug.

Winterberry Farm offers the community supported agriculture program, in which people pay for a steady supply of fresh veggies, during the summer and fall. Perry also sells vegetables, preserves, frozen chickens, pies and soup at the farm stand.

During the winter — once there’s snow on the ground — they give horse-drawn sleigh rides and sell cut-your-own Christmas trees. They also grow kale, spinach and other hearty winter vegetables.

Perry has been working to protect the farm with an easement for more than six years. It was a situation made more complicated by the fact the partner she bought the farm with is a co-owner of the property even though they’re no longer together.

Maine Farmland Trust had to buy the land from the ex-partner and put an easement on it with the alliance before selling it back to Perry at a reduced rate. The restrictions in the easement reduced the value by $25,000, which was picked up by the trust and the alliance.

The trust’s Forever Farm program is a way for farms to communicate with the public about the easement, a way of branding, Piotti said.

Farms are given the Forever Farm sign for the property and can be listed on the program’s website. The addition of Winterberry Farm brings the total of Forever Farms to 66, with six in Kennebec County, including Lakeside Orchard in Manchester.

Piotti said many people felt good about protecting their land with easements, but saw their actions in isolation.

“They didn’t really feel they were part of a broader movement,” he said. This movement, Piotti said, can become more significant for farming in Maine when more people know about it.

Perry said her first goal in the process was to protect the property from ever becoming anything besides a farm. She felt it was important to repay the land for everything it has provided her family.

“For me, it was about giving back, and I feel like I’ve done that by protecting it with an easement,” she said.

In order to buy the property back, Perry needed another piece to fall in place — a loan from the U.S. Department of Agriculture’s Farm Service Agency. The loan came through in October when the agency could begin using funding for fiscal year 2013.

Farming on the fiscal cliff

As a USDA program, the Farm Service Agency’s loan service is funded by the federal budget the U.S. Congress passes each year.

Besides loans to buy farm property and equipment, the FSA also gives loans out for operating costs and emergencies.

Unable to approve a new federal budget, the U.S. Congress passed a continuing resolution in September to fund the federal government until March 27 of next year. Executive Director of the Maine State FSA Donovan Todd III said the state agency was given around half of its usual budget in the resolution.

Because of the limited money, Perry is the only farmer to be granted a direct ownership loan for fiscal year 2013. The FSA won’t give the names of the farmers approved for loans, but Deborah Dufour, farm loan chief of the state agency, said only one such loan could be granted in 2013 until more funds are approved.

In Maine, the number of female farmers as the principal operators increased over 50 percent from 2002 to 2007. Across the country, they increased by 30 percent.

The USDA doesn’t have any more recent demographic information of farmers, but Dufour said she’s seen the largest increase of female farmers trying to buy farms over the last five years. Maine’s office has granted over half the direct loans for ownership to women in that time period, according to Dufour.

“More women are buying farms than ever before,” she said.

Most of the increase has been in coastal and central Maine with mostly vegetable farms, Dufour said, similar to Perry’s operation.

When picking vegetables in the summer, Kenya and her sibling make bets of whether they can get full on the harvested veggies, an easy challenge, she said.

“I love getting my hands in the soil, the dirt. It’s really meditating and relaxing,” Kenya said.

Sage said her favorite part of working on a farm is feeding their 38-year-old, nearly blind pony, Lady Bug.

With the easement, the farm will continue to be a farm even if Perry and her kids someday decide to stop.

“I never felt like an owner of the farm, always a keeper, to make it safe,” Perry said. “The farm is its own life force; and we are here and keeping it safe and enjoying the benefits and making a life out of it. Long after I’m gone this farm will continue to live.”