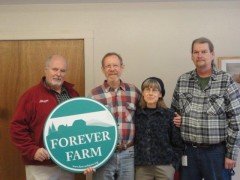 ALBION — Benton Field has been forever preserved as a place to grow pumpkins, squash, peppers and tomatoes.

“It’s a wonderful thing for the future of Maine farming,” she said. “It’s exciting to protect a seed farm; it’s protecting an asset that is important to other farmers and producers.”

Rob Johnston, founder of Johnny’s Selected Seeds, said it’s vital to preserve farmland, because if it’s ever developed into something else, it can’t be turned back.

“There needs to be a vision and coming together and doing something in an organized way to protect the land,” said Johnston, who started Johnny’s Selected Seeds in 1973 when he was 22.

Johnston had $500 in savings, space in a farmhouse attic, and a vision to start a seed company that produced delicious and easy-to-grow vegetables.

Today the employee-owned company has 80 full-time and 50 seasonal workers. It ships vegetable, flower, fruit and herb seeds, as well as tools and supplies, to growers and gardeners throughout the United States and to 50 countries.

John Piotti, executive director of the trust, said that as of January, the trust had helped preserve 30,055 acres all over the state and had worked with more than 350 farmers.

The biggest challenge, he said, “is the demographic freight train.”

That runaway statistic is the number of local farmers bearing down on retirement age, Piotti said.

Within the next five to eight years, Piotti estimated that ownership of about 400,000 acres of farmland will be in transition.

He said it’s critical that those acres be affordable for those who want to farm.

By permanently protecting Benton Field with an agricultural easement, Piotti said the land will be forever available at its value as farmland, rather than as potential development.

“This changes the economic equation so that it’s a fair price for farming,” Piotti said. “When people get the full picture of what is at stake, they realize this creates an economic engine to serve the community in perpetuity.”

The Benton Field is the third parcel of land that Johnny’s has protected with agricultural easement donations. The three parcels total about 150 acres.

Johnston said preserving this particular plot was important to its former owner, Nellie Alexander, who sold it to Johnston in 2010.

For about 25 years prior, Johnny’s had leased the land from Alexander and her husband, Lawrence Alexander.

Terms of the sale stipulated that Johnny’s secure an agricultural easement on the land, which would protect it from nonfarm development.

“Nellie Alexander had roots there and she and her husband, Lawrence, worked hard to clear the land and maintain it,” Johnston said. “She enjoyed having Johnny’s use the fields for vegetable breeding and seed production over the years and appreciated how we had improved the soil. She wanted some assurance that this kind of activity and care would continue.”

Janika Eckert, Johnston’s wife and co-owner of Johnny’s Selected Seeds, said that this spring, just like last, the field with southern exposure will be used to breed plants and produce seeds.

And Johnston said Joanne Davis, one of Nellie and Lawrence Alexander’s five daughters, is living in the farmhouse at Benton Field.