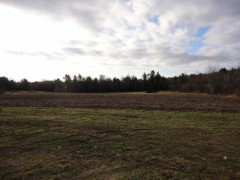 ALBION, Maine — Johnny’s Selected Seeds of Winslow has given an agricultural conservation easement to the Maine Farmland Trust on a 29-acre parcel of land the company owns in Benton.

The land has been used by Johnny’s Selected Seeds for the past 25 years, said founder and Chairman Rob Johnston Jr.

“We bought it from a landowner [Nellie Alexander of Benton] a year or so ago. It was her request that the land was only to be used [for agricultural purposes] going forward,” said spokesman Ben Sturtevant.

Johnston said Johnny’s will continue to use the land as its research facilities where the company does vegetable breeding and vegetable seed production.

It’s the third piece of land Johnny’s has donated to the trust for preservation, said Sturtevant. This latest announcement was made Tuesday.

“We’ve been doing this for four or five years,” said Sturtevant. “It’s kind of a new concept to preserve farmland. Farmers retire and don’t know what to do with their land. Rather than bringing in a big box shopping mall, it’s a way to make sure the land is protected to use as farmland going forward.”

Johnston said that once farmland is transformed for commercial use, it often is ruined for use as good farmland again.

“I think in an enlightened society, we need to place enough value on our land resources and take some statutory measures to preserve it. You have to trade some freedom for that, but that other option is to lose some good farmland,” Johnston said.

Johnston said that putting the land in Benton in a farmland trust ensures it would have to be used for agricultural purposes by any future owners.

Johnny’s Selected Seeds is an employee-owned company and has been in business for 39 years. It sells vegetable, flower and herb seeds, and also sell tools and supplies marketed toward small commercial growers and avid home gardeners, said Sturtevant.

HARVEST: Farm and Food News From Maine and Beyond Check back each month for a…

In these difficult times, we are reminded that we are all interconnected, and we're all…

Maine’s agricultural sector – with its more than 8,000 farms and approximately 1.5 million acres…