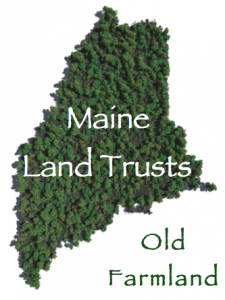 *Editors Note – This is the third in a series of pieces about Maine’s Land Trusts. Read all Land Trust related coverage here.

Perhaps no organization in the land trust movement has so dramatically discussed shifting demographics in relationship to the possession of land than Maine Farmland Trust, Inc.

MTF has determined that a third of Maine’s best farmland will be in transition in the next five to 10 years simply because of demographics. According to MTF, most farm owners are very old. When they die, MTF wants to ensure their land is conserved for agricultural use and that young, often first-time, farmers can work the land.

Since its founding in 1999, the corporation has participated in over 90 land transactions that have preserved more than 17,000 acres of farmland. According to the MFT website, the organization “is leading the efforts of farmers, landowners, local land trusts, farm groups, towns and state agencies collaborating to keep Maine’s productive agricultural land available for farming now and in the future.”

At present, the organization is fundraising to preserve 100,000 acres in the next five years. According to the National Center for Charitable Statistics, in 2010 the non-profit corporation reported gross receipts of almost $3.1 million and total assets of more than $6 million. MFT does not record conservation easements on its balance sheet and donation of easements are not reflected as income, according to the organizations 2010 Form 990. No data is available yet for 2011.

In an interview broadcast on Maine Public Radio’s “Maine Calling” on May 1, 2012, John Piotti, executive director of MFT, and Andrew Marshall, educational programs director for Maine Organic Farmers and Gardeners Association in Unity, described some of the land use and cultural transitions happening in Maine right now in relationship to individuals accessing farmland and the role farmland preservation plays in the developing events.

“We tend to see a lot of the younger folks,” Marshall said. “They’re young, idealistic, they’re pretty well educated. They often times have not grown up on a farm or even in a rural environment. So this is really their first time in this environment.”

Marshall adds that among MOFGA’s Journeyperson’s program, which conducts advanced farmer training, about two-thirds of the program’s participants do not have “secure long-term land tenure.”

“The primary reason is affordability,” Marshall said. “These folks are young, they’ve dedicated most of their adult working lives to learning how to farm and doing it right, and that has not put them in a position to afford land.”

“A great amount of our farmland is owned by very old people,” Piotti said. “The challenge has begun, in some ways a demographic challenge. We just have so much land that will be in transition in the next few years, we’re going to have a glut of available land.”

Piotti describes this demographic shift in greater detail on a TedTalk broadcast found at http://www.youtube.com/watch?v=4YynfOed_h4. In the recording, Piotti says many Maine farmers rely on land owned by the elderly.

“In Maine, about 150,000 acres of farmland is leased land,” he says. “That’s land that farmers rely on for their economic success, but they really have no control over. It’s often owned by very old people sitting in nursing homes. When they die or they are living in Florida, the family puts it on the market. Maybe the farmer who’s using it gets a call that says, ‘Hey, we’re about to list this property on Monday do you want to buy it?’ That’s when they’re lucky. This, in my mind, is the number-one challenge facing agriculture in Maine. It’s the barrier that keeps that vision from being realized.”

“We have this major problem that the land is not affordable,” he said in the video recording. “It’s complicated by the fact that there is a demographic challenge facing us. There’s an incredible amount of older farmers. And an incredible amount of very old farmland owners and they are dying. Or they are selling for other reasons. We anticipate that as much as a third of Maine’s best farmland will be in transition in the next 5 to 10 years simply because of the demographic issues.”

MFT—headquartered in Belfast, Maine—seeks to remedy the lack of affordable land in part through its Buy-Protect-Sell program. The corporation purchases farms, applies an agricultural conservation easement to the deed, then resells the property with the enacted easement covenant.

In addition, Maine Farmland Trust runs something called FarmLink. “Through FarmLink we match people who are looking for land with people who are interested in selling or leasing it,” said Piotti. “The dynamics of FarmLink have changed markedly in just the last few years.”

“I think people are increasingly realizing that it’s not so important to necessarily own the land as long as they have a well-crafted lease that’s going to give them long-term access to that property, the confidence to invest in amending the soil and invest in infrastructure and know that that investment is not going to be lost,” he said.

Piotti is seeing interest in leasing from a number of farmers. Some have resources to invest in farmland, but instead they choose to invest in the business “rather than tying it all up in the land,” he said. “When you look at a lot of other businesses, in many other businesses, you do not own the plant. You do not own, necessarily, the equipment. You own the means of production and the intellectual capacity to do the work.”

MOFGA’s Marshall notes, “There are some really neat, robust models of land tenure that are gaining ascendancy in Maine and around the northeast in general. There’s a bit of a changing of the tide in terms of sort of a philosophical approach to that. Ownership is not as important as it once was and people are opening themselves up to alternative models of land tenure.”

This is the third in an ongoing series about Maine Land Trusts – Read all articles here.

Diana George Chapin is a freelance writer and a fourth-generation family farmer from Montville, Maine.

Summer at the Fiore Art Center