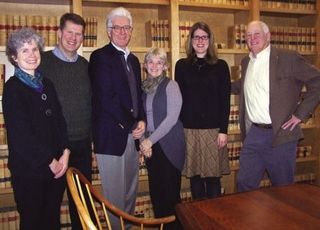 KENNEBUNK — Two farms in Kennebunk are now protected under an agricultural easement, thanks to a donation by the founders of Tom’s of Maine.

Tom and Kate Chappell have donated the agricultural easements for the two properties — which together boast 100 acres of open fields and over a mile of frontage on the Kennebunk River — to the Maine Farmland Trust, keeping the 154 acres forever available for farming. The farms are located along Alewife Road and Russell Farm Road.

“When you have a deep regard for the environment, you do what is necessary,” said Tom Chappell.

After selling Tom’s of Maine, Chappell founded Rambler’s Way, which offers a line of clothing that is sustainably made with the superfine wool of Rambouillet sheep. It’s on one of the Kennebunk farms that about 100 of these sheep produce a portion of the wool used in Rambler’s Way products. The other farm is used mostly for hay production.

“With Tom and Kate it was so easy and I think it was because in their mind it was very clear what they wanted to do,” said John Piotti, executive director of Maine Farmland Trust. “They wanted to protect that land and make sure after they didn’t own it, that it remains as farmland and continues to be productive farmland. They had the vision.”

The agricultural easements, which will be held by Maine Farmland Trust, prevent subdivision and non-farm development, but provide the flexibility needed to enable the land to be actively farmed.

“We were motivated by not just preserving land for the land’s sake or open space, but to keep it in production for future generations,” Kate Chappell said. “Maine Farmland Trust is a great asset for this state, doing such important work and doing it so well.”

“I don’t have much faith in the politicians in Washington or the bankers in New York,” Tom Chappell said. “I think the way change will increasingly happen is through innovative local efforts like what Maine Farmland Trust is doing.”

Join us for a screening of our new film series, Growing Local! January 29: 12pm…

REVIVING THE FREEDOM MILL and JOSEPH FIORE: THE NATURE OF THE ARTIST, two short films…