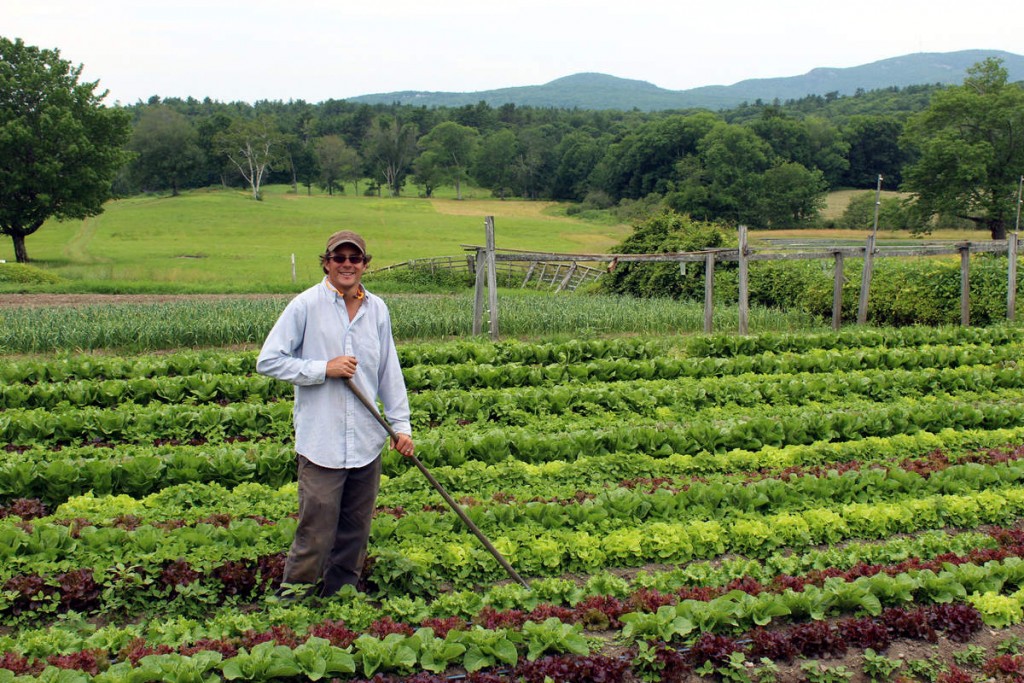 CAMDEN — When Cooper Funk pictured farming in Maine, the property at Dooryard Farms always came to mind when he would visit from California. His wife, Marina, could see the property on Mechanic Street from her bedroom window in the home she grew up in.

“For 10 or so years I had been coming back here prior to us moving, I had certainly been aware of this property,” said Funk, who now runs the farm. “In a way it was kind of what I could picture when I thought about farming in Maine. It was always something we had both considered long-term because we both love the area.”

Having had the experience of starting and running his own farm in California with two partners there, Funk said he had a realistic idea of what could be achieved.

“I’m very deliberately starting small and trying to build in a more organic fashion than trying to push things really hard right away,” said Funk. “We were on more of a burn-out pace in California, so I’m trying to avoid that again.”

When the property was put on the market with Maine Farmland Trust, it caught the couple’s attention, and they asked themselves if this was something they should consider buying.

“We went through a very involved consideration of whether it was something we could do, take on, or want to do,” said Funk. “Ultimately we decided yes, despite the fact that we have this partnership in California it seemed like a once in a lifetime opportunity and we should at least throw our hat in the ring.”

Funk also said it was more affordable and feasible than California farms. “The idea of owning your own land out there is a bit of a pipe dream unfortunately,” said Funk.

Working with both Maine Coast Heritage Trust and Maine Farmland Trust, the couple closed on the property in March 2013.

He said being on a farm was significant in both of their childhoods, and they want to provide the same experience for their children. Cooper and Marina have a 2-year-old son, Julian.

It was a long process to close on the property because they were working with two land trusts. The conservation easement, which the deal was predicated on, was also partially funded by a federal grant, making it a slow process.

“We finally closed, and it actually took an additional year to finalize getting it back from the federal government approval and finalize the conservation easement,” said Funk.

In 2013, they began growing in a half-acre garden. The farm itself is 40 acres, the couple has about 3-plus acres under cultivation and the rest is pasture.

For the first year, they had a little bit of produce at the farm stand and sold minorly to local markets.”It was really mostly for me to acclimate myself to the local environment,” said Funk.

He was also working on renovating the house. He considers 2014 the first proper season, since it was the first year of actual production scale in capacity.

“It’s definitely very much still a process of putting in infrastructure, getting systems in place, breaking new ground,” said Funk. “The past winter and spring we put in a greenhouse for adequate space for propagation.”

Funk said their biggest customers are places like Fresh Off the Farm, Good Tern Co-op, a number of restaurants such as Main Street Market, Long Grain, Salt Water Farm, Pig + Poet, and Suzuki, just to name a few.

“My long-term goal would be to have a thriving farm stand out at the road because really I think our chief asset is our location, on a busy street in the middle of town,” said Funk.

When they first arrived, the land was mostly pasture.

“To my knowledge, there has never been anything cultivated out in these fields, used for pasture and mostly hay,” said Funk. “Building up soil fertility and texture and everything is a work in progress and a long-term thing.”

The cage barn on the property was designed for birds in cages on the second floor that had a drop floor, all the manure falling to the bottom floor and pushed out by a tractor.

“So it has very beautiful, cultivated soil,” said Funk.

Although it is not the most ideal climate, Funk said his specialty on the farm in California was growing various peppers and okra, which he grows at Dooryard Farm despite the vegetables being more labor intensive.

Head lettuce is a large crop for him since being fairly close to the coast, the climate is more mild, which allows production to continue through the warm summer months. Funk said he plants about 360 to 400 heads per week.

Aldermere Farm hays the fields, and uses the hay loft to store hay both from Dooryard Farm and also other acreage they hay in the area. Funk said they put up 3,000 to 4,000 bales every year.

Being in his second year, he said he has no complaints over the past winter on how it affected the land.

“It was a little cool in June, but May was fantastic,” said Funk. “If that is how it is going to be after every harsh winter, I will gladly take it again. The soil was really in beautiful shape. I think there was so much snow that it insulated it, thawed from the bottom up just the warmth of the ground. So when it melted the ground wasn’t frozen so it could percolate as opposed to cooling on top and making a big muddy mess.”

Funk has many future plans for the farm, one idea being to incorporate more livestock on the farm.

“This property is much more ideally suited for pasture and livestock than it is for row crops,” said Funk. “But again, certainly based on my experiences in California, I’m not going to go into that until I can put in perimeter fencing, which is expensive. It is certainly going to take a while to get to that point, so for the time being I’m focused on veggies. I would like it to be much more of an inclusive holistic system that incorporates both animals and vegetables.”

Funk said he has loved gardening and growing plants since he can remember. “My first notion of work was working alongside my grandfather in his extensive gardens. In some extent it is in my blood a bit.”

“The thing I probably love the most about farming is it’s all encompassing aspect, it involves everything. You’re certainly on your toes, but it is extremely varied. You obviously doing a lot of horticulture, building crops and tending to the soil, but you also need to do carpentry, plumbing, and electrical work, etc. so I really like doing all of those things. The diverse nature of the work never gets dull. Obviously the fact that it is so seasonal always keeps it fresh and moving as you go through the seasons, so it’s just very dynamic. Always a new set of challenges, it doesn’t get boring.”

His primary goal is to have it be a viable operation, something that can stand on its own feet. Funk is certified organic and aims to have a sustainable operation, having the ethic of leaving the ground in a better shape than you found it.

“I have to say also, the nature and sort of essence of farming strikes me as a very kind of honorable profession. What you are doing is necessary for other people on such a fundamental level, growing food that is nourishment and sustains. Certainly I am inspired by that as well.

“Out of college I worked in offices, for nonprofits and stuff, so much of our world these days can feel abstract, preoccupied with issues and problems and stuff that exist in some sense, but not necessarily in the physical one. So to have your work be something that is tangible, something that you can feel and is right in front of you is absolutely something I am drawn to. There’s a little too much abstraction in our world right now.”

Funk said prior to closing on the property, Maine Coast Heritage Trust and Maine Farmland Trust worked very closely with the neighbors in this area and the community itself raised a fair amount of the money to be able to put the fields into easement.

“Part of the idea behind the name ‘Dooryard’ has to do with the more communal aspect of the term, where it’s kind of an extension of your house living space, but where you would meet your neighbors and talk, the dooryard call. So we really would like this place to be sort of a community centric farm,” said Funk. “We’re here for the local community and that is what motivates us, ultimately we strive to serve. The fact that we have a big influx in the summer is great and everything, but we really want our primary foundation to be our community, the folks we like with and work with.”

Funk said his family owes a debt of gratitude to their neighbors and the community around them for protecting the piece of land and enabling agriculture to exist there.

“So when we talk about wanting to be sort of a community-based farm, it’s very much acknowledging that the community really is responsible for the farm being able to be here today.”

Courier Publications reporter Lianne McCluskey can be reached at 236-8511 or by email at lmccluskey@villagesoup.com.

On July 31, Julie and Brian Fernee closed on the sale of an easement on…